Sweeping changes may be coming for drying wet tracks

NASCAR looks for ways of giving the fans what they paid to see, and waiting for a track to dry is not good for the sport.

Concord, N. C. – Drying a track after a rainstorm has always been a time-consuming and equally frustrating process to the race teams, the fans, the promoter and the television networks along with their audiences. Depending on the severity and timing of a storm, outcomes included lengthy delays and at times postponements. Re-scheduling a race is an expensive proposition to everyone involved and many fans can’t return for the rain date.

Years ago cars and trucks circulated the track to splash away the water and at times, large tires were dragged around a track. These methods preceded the use of jet dryers, which have been in use at major events for a while. Regardless, wet tracks spawn lengthy delays and/or rain-shortened events. 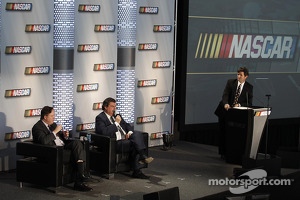 NASCAR has been keenly interested in speeding up the process and they believe a much quicker process has been identified. During the NASCAR Sprint Media Tour in Charlotte, NASCAR president Mike Helton spoke briefly about track drying. “In today’s world with the expectation of getting the show in (on time or nearly so), a priority was placed in finding a way to expedite the process, and this one seems to have quite a bit of validity to it,” the executive said.

The new effort is said to involve the use of a series of pipes through which compressed air is rammed through. If it works, it has the potential to offset the use of jet dryers. As to when it will be tested and evaluated, no specifics were provided but the project is thought to have a high priority.

Danica reveals all to the AP – it’s Ricky!

Does NASCAR need a 'Stupidity Provisional?'