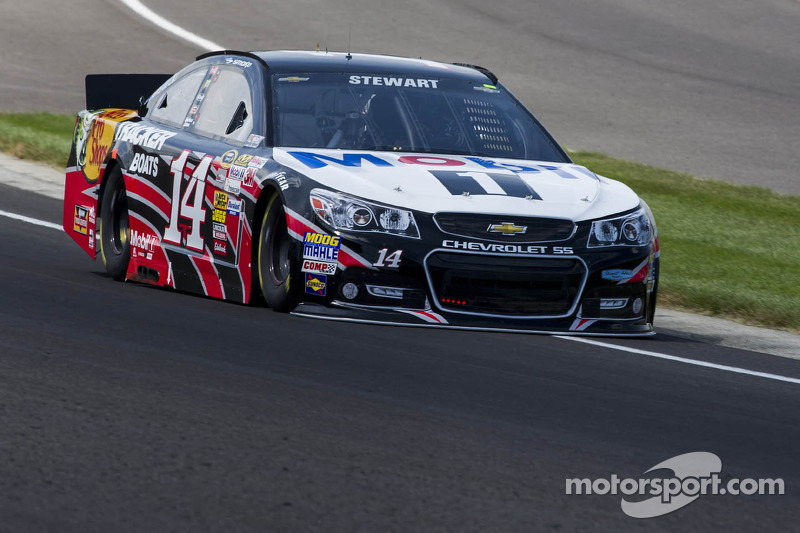 With round 21 of 36 complete, Stewart continues to lead the SHR contingent in the championship point standings.

A little teamwork can often go a long way, and Tony Stewart put that theory to the test Sunday afternoon at Pocono (Pa.) Raceway. Stewart, driver of the No. 14 GoDaddy Chevrolet SS for Stewart-Haas Racing (SHR), overcome a pit road speeding penalty to score a ninth-place finish in the GoBowling.com 400 NASCAR Sprint Cup Series race. It was his 22nd top-10 finish in 30 career Sprint Cup starts at the 2.5-mile triangle. 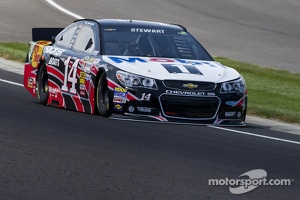 “We got here today thanks to good strategy by the crew chief because the driver screwed up today,” said Stewart, who picked up his eighth top-10 finish of the 2013 season. “I got us the pit road speeding penalty and put us in the back. Steve’s (Addington, crew chief) pretty keen on the pit strategy and what to do to get us back up there.

He got us back the track position; I just was a little too tight to stay there. It was a long day, but we’re glad to have a good day for GoDaddy, Mobil 1, Bass Pro Shops and Chevrolet. We had a solid day, and we’ve just got to keep clicking them off like this.”

Although Stewart qualified 20th for the 400-mile race, it wasn’t indicative of the car’s capabilities, which were established early in the race. Stewart cracked the top-10 within the first 25 laps. Varying pit strategies resulted in the No. 14 team progressing and regressing in the running order, but Stewart never lost touch from the top-20 during the first third of the event.

The team suffered its lone setback during the third caution on lap 53 when Stewart was tagged for speeding entering pit road. Because he had to restart at the tail end of the field, Addington brought Stewart back to the pits to make more extensive adjustments. Stewart was in 28th-place when green-flag racing resumed and quickly went to work, climbing back into the top-10 by lap 72 and even taking a turn at the lead on lap 76.

While the team did not contend for the win, the day ended with yet another solid Pocono performance that keeps Stewart within striking distance of the top-10 in the championship point standings, as he is just five points behind 10th-place Greg Biffle.

“We’ve been running well,” Stewart said. “It’s just we still need to be a little bit better. There are cars that are still a little bit better than us right now that we’re trying to get caught up to. So, I think our focus is more than just making the Chase. It’s one thing to make the Chase, but it’s another thing that once you get there, you’ve got to have something you can contend with.

We’re staying focused on just taking it one week at a time and working on our program. Everybody is working hard – all of our partners are excited, especially after Ryan’s (Newman) win at the Brickyard last weekend. Everybody at SHR is doing an awesome job, and Hendrick engines and chassis have done a great job, too. We’ve just got to keep clicking them off and just keep getting a little bit better each week.”

Newman, driver of the No. 39 Haas Automation Chevrolet, led the SHR contingent Sunday with his fourth-place finish. It was his ninth top-five in 24 career Sprint Cup starts at Pocono and his fourth top-five of the season.

Danica Patrick, driver of the No. 10 GoDaddy Chevrolet SS for SHR, finished 35th in her 31st career Sprint Cup start and her second at Pocono. Patrick was running among the top-20 until becoming involved in an accident on lap 111. She was unhurt, but her car was too damaged to continue the race.

Kasey Kahne won the GoBowling.com 400 to score his 16th career Sprint Cup victory, his second of the season and his second at Pocono.

There were nine caution periods for 35 laps, with 10 drivers failing to finish the 160-lap race.

With round 21 of 36 complete, Stewart continues to lead the SHR contingent in the championship point standings. He remained 11th and has 594 points, 178 back of series leader Jimmie Johnson and five points behind 10th-place Biffle. Newman gained one spot to rise to 15th. He has 575 points, 197 out of first and 24 behind Biffle. Patrick dropped one spot to 27th and has 373 points, 399 behind Johnson and 226 away from Biffle.

Five races remain before the 12-driver, 10-race Chase for the NASCAR Sprint Cup begins Sept. 15 at Chicagoland Speedway in Joliet, Ill. Only the top-10 in points are locked into the Chase. Positions 11 and 12 in the Chase are wild cards, awarded to the two drivers between 11th and 20th in points with the most wins. In the event of multiple drivers having the same number of wins, a driver’s point standing serves as the tiebreaker.

Stewart, Martin Truex Jr. and Newman are the only drivers between 11th and 20th in points with a victory. Since Stewart and Truex sit 11th and 14th, respectively, in the standings, they hold the first and second wild-card spots.

Patrick, who is competing for Rookie of the Year honors against Ricky Stenhouse Jr., finished one spot behind Stenhouse, who placed 34th.

Dale Earnhardt Jr. dissatisfied with his fifth-place run at Pocono

Silly season is in full swing after Newman wins at Indy