Stewart talks with media about helping Patrick adjust to Darlington

TONY STEWART, NO. 14 OFFICE DEPOT/MOBIL 1 CHEVROLET, met with members of the media at Darlington Raceway and discussed helping teammate Danica Patrick adjust to the track, Jim Hunter’s induction into the South Carolina Athletic Hall of Fame and other topics. 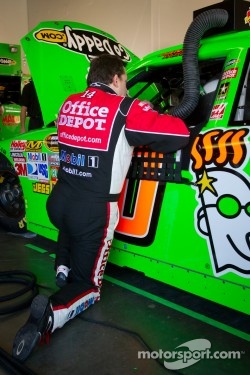 YOU’VE BEEN WORKING A LOT TODAY WITH DANICA. IS THERE STUFF YOU CAN HELP HER WITH? “I was talking to Mike Helton earlier. I told him it reminded me of the first time I came here in 1999. The comments that she had are very similar even though the track was a lot more worn out then. This is a hard place. That is why we picked this as one of the 10 races for her. It’s not an easy track. It’s one that just the more laps you can get the better. It’s going to be a long weekend for her. It’s like I told her, I said ‘you are going to hate me by the end of tomorrow night’. She goes ‘yeah, but I’m going to love you next year when we come back and run this full-time.’ She understands the value of why we picked this as one of the races. I think she is keeping the big picture in mind. I think she is doing a really good job of taking it all in stride and not letting her position on the time sheet get her down and realizing that the whole weekend in a learning experience and trying to just get that time. We are just trying to be there to where she says ‘what can I do to help myself here?’ It’s stuff that we have already had to go through. That is part of having two teammates that have ran here a long time. It’s just being there to be able to try to help her with the information of stuff that we have done to try to help shorten that learning curve for her.”

IS THE GOAL FOR HER TO COMPLETE AS MANY LAPS AS POSSIBLE OR DO YOU HAVE AN IDEA OF WHAT YOU WOULD LIKE FROM HER? “I want her to just as run as many laps as possible. The more time she can spend on track the more experience she is going to get. The good thing running both divisions she is getting a ton of track time both practices, already to this point of the day she had got a lot of laps under her belt. If she has a good race tonight and good night tomorrow night and can run the whole day and not have too many problems then it’s a lot of valuable experience that when we come back here next year doing it full time should be very valuable when we come back.”

YOU SAID SHE IS NOT GETTING CAUGHT UP IN THE SPEEDS TODAY. COULD SHE GET FRUSTRATED TOMORROW? “Sure, anytime you go somewhere new it’s hard. The races that we picked this year were not meant to be easier races. They are all harder races that we think are valuable for different reasons. It’s very easy that this weekend could be a frustrating weekend but it’s all a part of a bigger plan. I think that is part of what will keep it from being frustrating is that she knows that this is set out to be a tough weekend. It’s with a bigger picture in mind and a bigger goal in mind at the end of the day.”

ISN’T THERE A RISK IN THAT? IF THINGS DON’T GO WELL THAT CONFIDENCE STRUGGLES WILL ENSUE? “I honestly don’t think so. That’s a valid point. I think when you don’t set your expectation high right off the bat I think it’s easier to keep that from happening. She knows this is a tough place. All you have to do, I think it’s easy for her because she has walked down through the garage and Jimmie Johnson has the right side about half knocked off. There are a bunch of guys that are veterans here that already got big stripes just like she has on the side. She realizes this isn’t an easy place. I think in her head she is smart enough to know that this is supposed to be a hard weekend. This is going to be one of the tougher places next year too that is why it has been put on the schedule.”

IS THERE ANYTHING THAT YOU CAN TELL HER ABOUT HOW TO DRIVE HERE? “There are a lot of things. Bobby Labonte taught me a lot of things when I came here the first time because he was my teammate. It’s part of passing that information down. The good thing is she has Ryan’s (Newman) information, my information and the time in the Nationwide car. It’s nice to be able to answer questions when you have those in your mind and you don’t necessarily know what’s the right answer, having teammates to go to that have been through it and can point you in the right direction helps out a lot.”

IS IT AS SIMPLE AS JUST SHOWING HER THE LINE? “I think a lot of it is what to do on the throttle, on the brake. How much brake pressure. Its things that coming from an indy car to these cars it’s different. It’s just trying to guide her. Everybody is going to have their own driving style and techniques. She will have to find what works best for her. Ryan (Newman) does use his brake pressure different than I do. We keep reminding her that there is no set way of doing it. It is do what feels best to you. It’s helping her find a base. Once we get her on a base then she can fine tune it to what her driving style is like and her techniques that work for her.”

WHAT DID JIM HUNTER MEAN TO YOU? “He’s (Jim Hunter) somebody who has been around the sport a long time and he’s very knowledgeable about it. I think all of his peers and all of us in the garage area -- we all have a lot of respect for him. I think it’s well deserved.”

WHAT WERE YOU LIKE TO RAISE AS A CHILD? “She’s still raising me -- I’m still not raised yet I don’t think. I was a handful. My sister was a handful too. My sister and I were like watching a Tom and Jerry cartoon. You can imagine being the mother of that.”

DO YOU THINK YOU DELIVERED A MESSAGE LAST WEEK AT TALLADEGA? “I wasn’t trying to deliver a message. The good thing is that I’m in Darlington this week and I’m happy to be in Darlington this week. I haven’t won a Southern 500 yet so I’m excited with getting Vegas under our belt earlier this year -- this is a big week for us and I’m glad to be focusing on it.”

DO YOU THINK ANY CHANGES WILL COME FROM WHAT YOU SAID AT TALLADEGA? “I don’t know and I didn’t say anything to try to get them to make changes.”

WHY HAS THIS TRACK BEEN TOUGH FOR YOU TO WIN AT IN THE CUP SERIES? “It’s not a big list of races that we haven’t won at. I’m not ashamed of it by any means. For some reason, I just haven’t figured out how to win one yet so hopefully this year will be the year.”

IS THERE LUCK IN WINNING AT DARLINGTON? “I don’t think so. There are some tracks that have been easier tracks for me and then there are tracks that have been tougher. This one -- not getting a victory here that is proof this is a tougher track for me. It’s one that I like and the good news is that I’m pretty happy with my race balance right now so I’m hoping it’s going to be a good weekend.”

WHAT DO YOU THINK COULD BRING MORE FANS TO THE RACE TRACK? “I have no clue. I honestly have no idea.”

DO YOU THINK IF DALE EARNHARDT JR. WON THAT WOULD BRING MORE FANS TO THE TRACK? “I don’t know -- do you think it is?”

ARE YOU SURPRISED THAT PEOPLE ARE QUESTIONING THE RACING IN NASCAR AFTER THE HIGH THE SPORT WAS ON AT THE END OF LAST SEASON? “I still think it’s on a high. The racing has been awesome this year. The races have been, you look at the whole Richmond weekend, the whole Richmond weekend the races were great. From K&N to the Nationwide race, the Cup race -- they were exciting races. I think it’s proof that the sport is still on a high right now. I don’t think that’s stopped since last year.”

Edwards talks about Darlington with the media