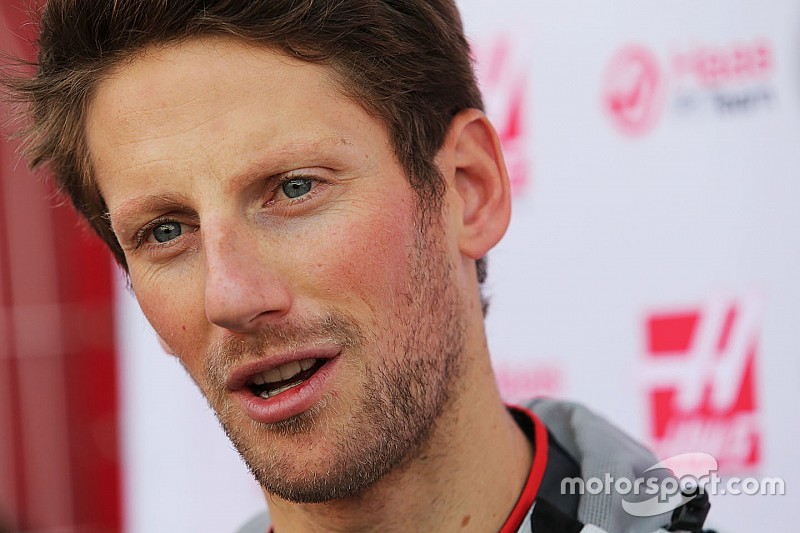 Formula 1 driver Romain Grosjean's debut in NASCAR could happen as early as this summer, after Stewart-Haas Racing revealed it is now working on a plan to get the Frenchman a race entry.

The idea of Grosjean running in a NASCAR has been mentioned before – with the Frenchman telling Motorsport.com during a factory visit last year that he would be up for it.

"We may give it a go. I think it would be really cool," he said after sitting in a Sprint Cup car on the day he was announced as a Haas F1 driver.

But that dream could become a reality sooner than many expected, as Stewart-Haas has admitted it is now investigating what needs to be done to get the Frenchman in to a race.

"It's definitely on our wish list," Joe Custer, chief operating officer of Haas F1, told Motorsport.com. "We just have to make it work — whether it be this year, next year, whenever that is. We're not sure."

Grosjean has scored points in three of the four F1 races this season. If the Frenchman elects to test the NASCAR waters, Haas' championship team SHR will do whatever it takes to accommodate the driver.

As Custer says: "There would be nothing more interesting than a current F1 driver having a good run in a NASCAR race. I thing that would be good for everybody. It would drive more interest."

Grosjean would not be the first F1 driver to race in NASCAR, but he would be doing so at a very different point in his career.

Kimi Raikkonen flirted with the Nationwide Series (now Xfinity) and Trucks in 2011 when he was between F1 gigs, with the Finn's presence being welcomed and causing a buzz.

Before that, when Juan Pablo Montoya arrived after six F1 seasons, his goals were different. The Chip Ganassi racer was making a career switch and made NASCAR his home for seven years before returning to open wheel with Roger Penske.

For Grosjean, the opportunity would be to simply test the waters while still enjoying his F1 career.

Custer added: "He's made it clear that he wouldn't want his debut to be on an oval - where he's never done it before. There's so much going on.

"We have to figure out the testing opportunities and all the things that would make it a success.

"That would be our first approach - it is to evaluate what would make this a successful event with sponsors and get everything else aligned right. That takes time."

Opportunities do exist as early as this summer though, if a plan can be put in place by then.

Either road course race on the Sprint Cup schedule would be ideal for the 30-year-old racer with Sonoma (June 26) and Watkins Glen (August 7) both during off weeks for F1.

But while Sonoma falls at the end of the Canada/Baku back-to-back run, the Glen race falls in the middle of the F1's summer break between the German GP (July 31) and the Belgian GP on August 28.

"I'm not sure when it would happen, but it's on our list," explained Custer. "We would like to have him test. He would be a rookie.

"I don't think there are any barriers to any of this. We just have to figure it out and get it on the schedule.

"Then, five cars or four cars? Or does he work with another team in the garage. All of that. We have to work out the details and have enough time to make it happen."

Regardless of a driver's resume, he or she still has to be approved by NASCAR. Currently SHR has four cars, which is currently the limit for each organisation.

However, teams are allowed to run a fifth team for rookies (which is how Grosjean would be classified) in seven races.

Since Haas F1 entered F1, Custer says 'tremendous interest' has sparked within the NASCAR garage about how the grand prix team is faring.

"I've received feedback from management to crew guys - not just on our team - across the spectrum and beyond Cup, Xfinity and Truck," Custer said. "The people are fascinated by it. They ask me about it and they're following it. That's great for our sport.

"It's a different platform that we race, but there's a lot of commonalities as well. A lot of tools. They watch it with a different eye than they did in NASCAR 10 years ago - and vice versa.

"Across the spectrum of owners and teams in the F1 garage, I get questioned about how fascinated they are with NASCAR. That's the interesting part of this project - is to cross-pollinate.

"Really what we want to do is drive fan interest. We want to put more eyeballs on our F1 teams and our NASCAR teams as well."