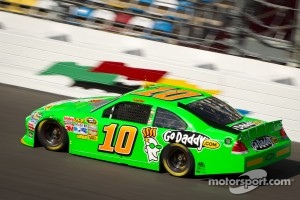 KANNAPOLIS, N.C., (Jan. 31, 2012) – Stewart-Haas Racing (SHR) has entered into a collaborative partnership with Tommy Baldwin Racing (TBR) where TBR will field the No. 10 GoDaddy.com Chevrolet Impala for all 10 of Danica Patrick’s NASCAR Sprint Cup Series races in 2012.

The alliance guarantees a starting spot for Patrick in her Sprint Cup debut – the 54th annual Daytona 500 on Feb. 26 at Daytona (Fla.) International Speedway.

TBR’s No. 36 car, which finished the 2011 season 33rd in points, becomes the No. 10 for 2012. For the 26 races where Patrick is not scheduled to drive, David Reutimann will pilot the No. 10 car. TBR has sponsorship inventory available for these 26 races.

“Tommy Baldwin Racing has proven to be a very strong organization and it’s a good fit with Stewart-Haas Racing,” said Matt Borland, vice president of competition, SHR. “It’s a Chevrolet team led by a racer who knows every inch of a racecar. That kind of technical expertise, along with a company mindset that is similar to ours, provides the ideal environment for Danica to learn and succeed.”

TBR was formed in 2009 and has matured from a single-car team to one that in 2012 will field two Sprint Cup entries and a NASCAR Nationwide Series entry. TBR is owned by Tommy Baldwin, who as a crew chief secured five victories, including the 2002 Daytona 500 with driver Ward Burton.

“We’re very proud of what we’ve established at Tommy Baldwin Racing, and the opportunity to partner with Stewart-Haas Racing and aid in the development of Danica Patrick is a testament to all the hard work we’ve put in over the years,” Baldwin said. “Danica will have a great teammate in Dave Blaney, who has been instrumental in getting our race team to where it is today. And with David Reutimann driving the No. 10 car in the races where Danica is not, the team will remain in a strong and competitive position throughout the year.”

“Go Daddy is a first-rate sponsor,” Baldwin added. “Look how they’ve supported Danica over the last six years. Go Daddy is a sponsor that knows how to get things done right.”

Baldwin will maintain a hands-on presence with the No. 10 car and will work closely with Greg Zipadelli, who serves as SHR’s director of competition. Baldwin and Zipadelli have similar backgrounds, as both grew up in the Northeast – Baldwin in Bellport, N.Y., and Zipadelli in Berlin, Conn. – and made a name for themselves as successful crew chiefs within the NASCAR Whelen Modified Tour before rising up the ranks as crew chiefs in the elite Sprint Cup Series.

“Working with Tommy will be like old times,” Zipadelli said. “We both grew up together and competed against each other in Modifieds and we did the same thing when we got to Sprint Cup. To finally be able to work with each other and help Danica Patrick make a successful transition from Indy cars to stock cars is a challenge we’re both looking forward to.

“Partnering with Tommy and his team provides Danica with the foundation she needs to succeed. With a guaranteed starting spot, we can go into each weekend and simply learn. It’s all about getting her comfortable in the car, and with the variety of tracks she’s running, seat time will be incredibly valuable. A guaranteed spot in the race ensures that she’ll have the opportunity to make as many laps as possible.”

One more race is still to be determined, with the plan being to assess Patrick’s development as the season progresses and then choose the remaining venue based on need and competitive reasoning.

“Our goal with Danica’s schedule is to try and maximize her 10 races so that she’s as prepared as she can possibly be for a full-time Sprint Cup schedule in 2013,” said Stewart, co-owner of SHR with Gene Haas, founder of Haas Automation – the largest machine tool builder in the western world. “There are short tracks, intermediate 1.5-mile ovals, and some unique tracks like Darlington and Phoenix. The point is to expose her to as many challenges as possible so that she’ll know what to expect in 2013.”

Masters of the game: Dale Earnhardt

A tail gate party at Daytona