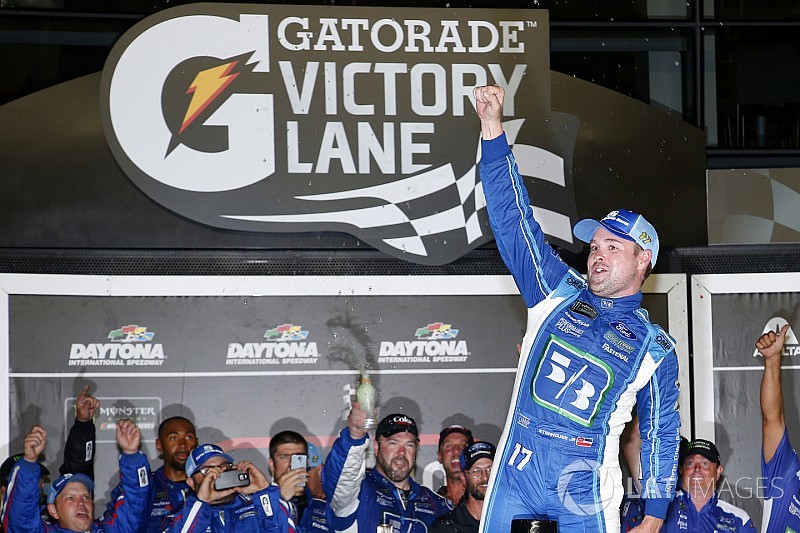 The final stage of the Coke Zero 400 was a record-setting wreckfest with 14 cautions, but Stenhouse secured the lead on the bottom lane in overtime. He led 17 laps and held a 0.213-second advantage over Clint Bowyer at the finish.

“This bridesmaid deal sucks,” Bowyer said after matching his second-place finish from Sonoma last week. “I want to win. We’re in this business to win.”

Kevin Harvick remained on the track and led the field to green for the final stage. Stenhouse, Suarez, Bayne, Jones, Gaughan, Ryan Newman, Landon Cassill, AJ Allmendinger, Clint Bowyer and Chris Buescher also stayed out and comprised the top 100 for the restart. Jamie McMurray, the first car off of pit road was 11th. Keselowski, Blaney, Elliott and Hamlin rounded out the top 15. Dale Earnhardt Jr., who received damage in Stage 2, climbed up to 31st, one lap down.

Jones took the field three-wide on the backstretch but it was Stenhouse who moved out front after the first lap. Bayne, Harvick, Suarez, Gaughan, Ragan, McMurray, Jones, Blaney and Hamlin rounded out the top 10.

Harvick moved up to second on Lap 87 with Suarez to third. Blaney (sixth) pushed Bayne on the inside lane but couldn’t get past the leaders. Working Lap 89, Gaughan came down on Kurt Busch (sixth) then bounced off the wall between Turns 1 and 2 to bring out Caution 7.

Suarez remained in the lead after the first lap with Kenseth to second and Johnson third. McMurray tried to make the outside lane work with a push from McDowell. Earnhardt moved up to 17th in the first two laps.

Michael McDowell bounced off of Chase Elliott on the backstretch to bring out the eighth caution on Lap 97. Elliott spun around and collected Bayne, who drove into the grass to avoid the collision.

“That is the biggest dumbass I've ever seen in my life,” Elliott said. "He couldn't drive a wooden screw.”

Kenseth passed Suarez for the lead before completing the first lap. Johnson took his turn up front on Lap 103. McMurray was second followed by Ty Dillon, Kenseth and Suarez.

Harvick and Earnhardt fall out

Coming onto the backstretch on Lap 105, Harvick (fifth) snapped around into Earnhardt, who was running seventh. Kahne and Keselowski spun in the melee. Kurt Busch made a masterful move down to the inside to avoid the crash.

“We just blew a tire,” Harvick said. “I hate it for our Jimmy John’s Ford guys. That’s the way it goes. It just blew out right in the middle of the corner. I hate to wreck half the field. That’s a part of what we do.”

Bowyer remained on the track followed by Stenhouse, Gaughan and AJ Allmendinger. Kenseth was the first driver off of pit road followed by McMurray, Ty Dillon, Blaney, Jones and Johnson. LaJoie, Wallace, Patrick, Buescher, Menard and Sadler rounded out the top 15 as the race returned to green with 50 laps remaining.

“We were just kind of drafting right back up there and I think the No, 4 (Kevin Harvick) got a flat,” Earnhardt said. “I had nowhere to go, but it was fun. We had a pretty strong car. We had some gremlins in there; I'm not sure what was going on with that, but we had the toe-in messed up.”

Earnhardt retired after 106 laps. Keselowski made multiple stops on pit road and restarted and restarted 29th. Allmendinger dropped out of the top-five and onto pit road.

Kenseth led the field to green on Lap 120 — but the field raced as far as Turn 2 before Kahne (fourth) was involved in a single car wreck after pulling down in front of Ragan. Kenseth maintained the lead followed by Jones, Wallace, Ty Dillon, Johnson, Ragan, McMurray, Blaney, McDowell, Suarez and Sadler. Bowyer, Elliott, Newman, Stenhouse, Patrick, Kyle Busch, Larson, Hamlin and Menard rounded out the top 20.

Dillon pushed Kenseth to a two-car lead into Turn 1 on the Lap 124 restart. Blaney moved to the outside and passed Kenseth on Lap 127.

DiBenedetto cut a left front tire on Lap 128 for the 12th caution — which tied the record for yellow flags for the event set in 1989. Blaney continued to lead followed by Kenseth, Bowyer, Johnson, Suarez, Ragan, Stenhouse, Jones, Kahne, Menard and Kyle Busch. Wallace and Elliott ducked down pit road and lined up 25th and 26th, respectively.

Blaney led the field to the restart on Lap 133 and with a push from Bowyer extended his advantage into Turn 1. After the first lap, Suarez moved to second followed by Stenhouse. The Nos. 17 and 19 took Blaney three-wide. Kahne pulled around to the front for the lead on Lap 136. He led two laps before Suarez took the point. Kahne retook the lead on Lap 139 with the Joe Gibbs Racing teammates Suarez and Kenseth behind. Bowyer and Ragan rounded out the top five with 20 laps remaining. Hamlin, LaJoie, Elliott, Jones and Menard completed the top 10.

The top-six cars — Kahne, Kenseth, Suarez, Bowyer, Jones and Menard — ran single-file with 15 laps to go. With 12 to go, Stenhouse made the inside line work with a push from Ty Dillon and passed Kahne. Dillon was third followed by Kenseth and Larson.

As the field came out of turn 4 to complete Lap 153, Larson slid up into Stenhouse. The No. 42 went airborne then spun into Blaney at the wall. McDowell bumped Kenseth into the grass. Larson slid down made contact with Kenseth before stopping.

Wallace went low and hit Kurt Busch who spun like a top across the start-finish line. Patrick and DiBenedetto were also involved.

“We got clipped,” Kurt Busch said.

Sprint to the checkered flag

After eight minutes and 41 seconds, NASCAR withdrew the red flag and the race returned to yellow with six lap remaining. Dillon was the control car with Ragan on the inside. Ragan moved out to the lead with a push from Allmendinger on Lap 157. As the field came to the backstretch McMurray came down on Jones and sent the No. 77 spinning. Hamlin and Johnson also got  out of shape and made contact. Kahne came down for tires on Lap 159.

Stenhouse pushed Ragan to the lead then took the point on the backstretch. McDowell moved into second followed by Dillon, Menard and Ragan at the white flag. Stenhouse held onto the lead for the win by a 0.213-second margin over Bowyer, who finished second for the second-straight week.

"I left the bottom (lane) open for (Ty Dillon) and I thought I gave the race away there," Stenhouse said during his post-race celebration on the track. "Wow, I kept my Talladega car and I told them to build a new one and they built a Fifth Third Ford that was really fast.

"We won the Firecracker 400, man, that's awesome! I've been coming down here since 2006 one time with Bobby Hamilton Jr. It's cool we put it in Victory Lane and got our second win this year."

There were 33 lead changes among 16 drivers. Keselowski’s 35 laps were the most led in the 163-lap race.

The race also set a record time at three hours, 20 minutes and 30 seconds.

Despite finishing 29th, Larson remains the point leader by 18 over Martin Truex Jr.