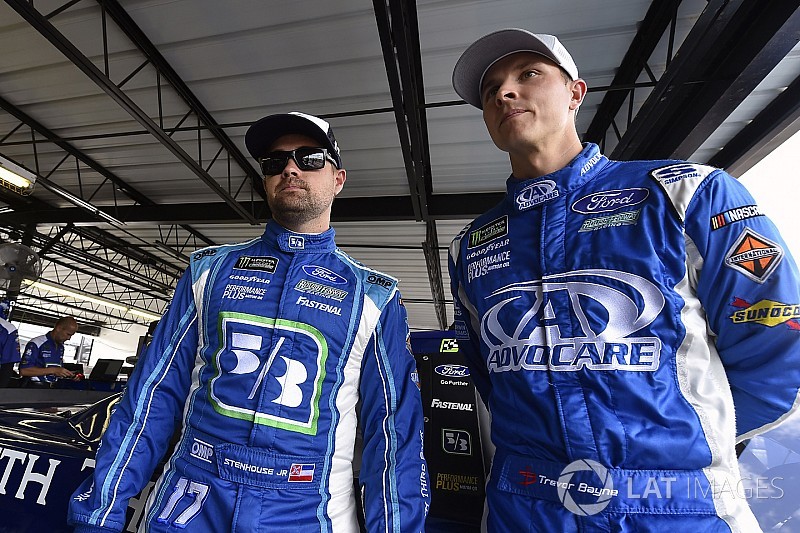 That’s not unexpected, considering that it will be Bayne’s No. 6 Ford that Kenseth is scheduled to take over for several races between now and the end of the 2018 season.

Bayne stepped out of his No. 6 hauler Friday morning at Talladega (Ala.) Superspeedway to issue a statement regarding the news, but elected to take no questions.

“I appreciate you all coming out here over to the hauler. The purpose of doing this is because I know how this works and I didn’t want everybody wasting their time chasing me around all weekend trying to get a quote. I have a brand new PR guy inside and I would like to break him in the right way. I wanted to get you all together to let you know that first of all, my health is 100 percent. I am as fit physically, mentally and spiritually as I have ever been to do my job well,” he said.

“The second part is that my desire is still as it has always been since I was five-years-old to come to the track every weekend to contend for wins and championships and be a driver at the top level in the Cup Series. Nothing there has changed. I am still going to pursue that because I feel I have the ability to do that. Right now I don’t have much more to add to that. … I am here to win Talladega as I had planned to do before any of this. That is what I am going to do.”

Kenseth’s first race in the No. 6 will be in two weeks at Kansas Speedway. The exact number of races in which Kenseth will compete has not been set as yet. Bayne is expected to do the races in which Advocare sponsors the car.

For Stenhouse, who has seen an upturn in performance in recent weeks, he sees Kenseth’s return as a driver and consultant as a positive for the organization.

“I leaned on Matt a lot my rookie year in the Nationwide Series. I called him and would ask him questions trying to figure out when I was struggling. I really had to get back on track. I think he did a really good job with me on that,” Stenhouse said during a news conference Friday.

“So fast forward to now, after he left and went to Gibbs and drove different race cars, for me I am looking forward to his feedback on how our cars drive relative to another organization that is clearly one of the class of the field. I think on that side I am anxious to kind of see his feedback.”

Stenhouse said he has spoken to Bayne about the situation and tried to relate it to his own experience while at RFR.

“I told him that I have been through this in a totally different series and probably a lot different stage in life,” he said. “I told him just to keep his head down, go out and keep running races and prove to everybody that you have what it takes and don’t really listen to anything from the fans, media or other teams and just do your deal.

“That was the feedback that I gave him.”