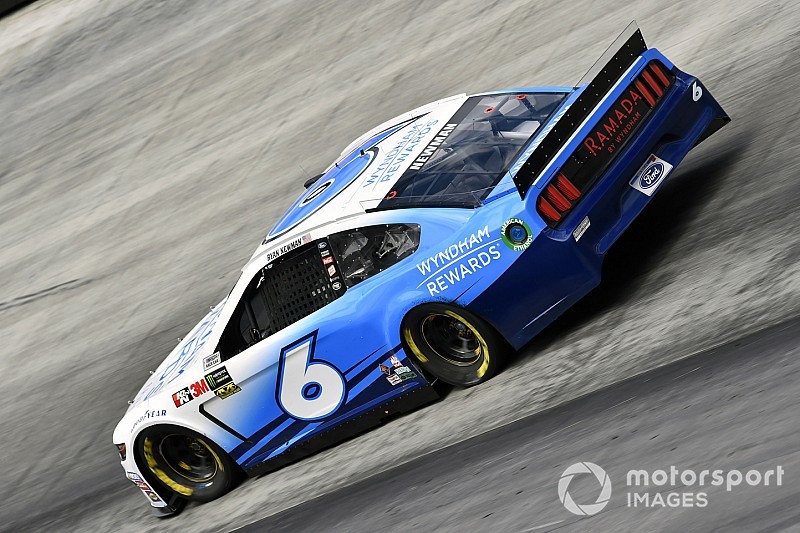 Despite scoring his first top-10 finish of the season after moving over to Roush Fenway Racing, Ryan Newman wasn’t happy with his result Sunday at Bristol.

Newman was making reference to the contact he and Ryan Blaney had while racing in the top 10 late in Sunday’s Food City 500.

“The spotter might as well take the mirror out of the car,” said Newman. “He (Blaney) cut me off on the back straightaway and kind of hurt both of us. It was hard racing and it sucks. I guess it happens at Bristol.”

Blaney was trying to make the pass by Newman for position and collected the veteran in the process and took the blame after the race.

“He got me back and fenced me on the frontstretch. That’s hard racing and Ryan and I have always raced each other good and it’s nice to be able to laugh about it. It was my fault, I was just trying to clear it myself.”

While Blaney might have felt better about it post-race, Newman felt that incident - as well as a late penalty on pit road - kept him from having an even better finish.

When asked if he was happy for the first top 10 and upset about the incident, Newman didn’t leave anyone wondering with his answer.

“Both,” he said. “You expect more out of him. If it’s a rookie, it’s one thing but the spotter can’t drive the car and the spotter has to see the runs, too. We had a car that was better than we ran most all day, just kind of got caught up there. (I’m) proud of the guys and they did a good job on pit road despite the penalty. We just have to keep digging.

For Blaney, who finished fourth for his fourth top-five finish in the past five races, he said he still needs to figure some things out at Bristol.

“I just kind of run into this all the time here,” said Blaney. “(We run) good early and I can’t figure what I got to do to get better as the track rubbers up. Joey (Logano) is really good at it. I just need to do something different.

“Not a bad day. We were up there all race and just try and keep up with the track and I thought the track was really racey today from the bottom to the top. I thought it put on a pretty good show.”

Kurt Busch: "I was going to wreck my little brother to win today"