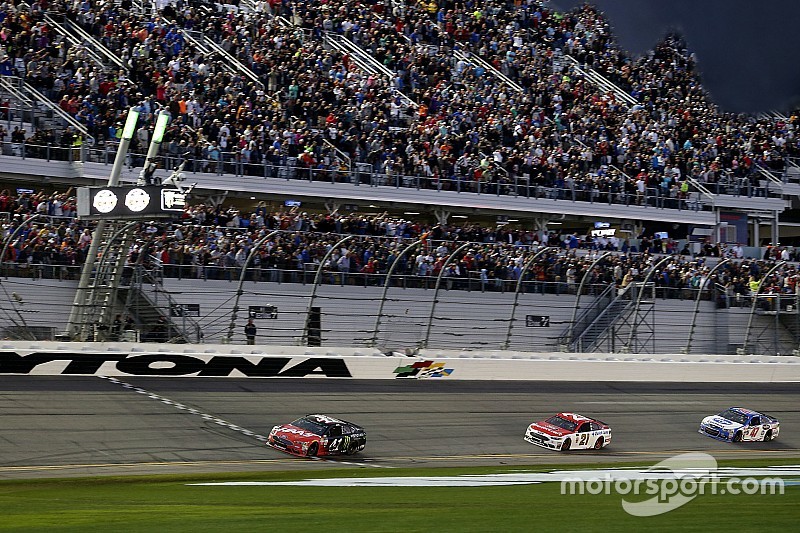 Ryan Blaney started the Daytona 500 from the rear of the field but he didn’t stay there long.

Blaney, who was forced to go to a backup car after wrecking in his 150-mile qualifying race on Thursday night, started in the back in Sunday’s Daytona 500 but wasted little time moving through the field and into contention for the win.

By the end of the wreck-marred race, Blaney was running in the Top 10 and close on fuel – like most of the rest of the field – but received a push from fellow Ford driver Joey Logano which bolted him up to second before the checkered flag.

Blaney did lead once in the race for two laps.

“I tried to make a move with 10 to go and I didn’t go anywhere. I thought we were kind of stuck. Luckily we had (Logano) with us. I kind of helped him and he kind of helped me,” Blaney said.

“Late there we got a big run into (Turn) 1 and we kind of all separated and I got a big pull. I got to second behind (winner Kurt Busch) somehow and that kept us going the whole way. I laid back to (A.J. Allmendinger) thinking I’d get a good run and I was sputtering and running out of gas on the backstretch.”

“It was such a fast Ford. For (it) to be a backup car, that really means a lot. Not what we wanted, but a pretty good run and start to the season.”

Patience and persistent appeared to be the key for those who survived to conclusion of the race and contend for the win.

“That’s what we were talking about for three days, especially when we knew we’d be starting in the back,” said Blaney’s crew chief, Jeremy Bullins. “You have to be patient, but patiently aggressive.

“He did the right thing early, he was very patient, but he put himself in the right spots to get back to the front. That set it up for us to get the finish that we did.”

Getting to the checkered flag

Bullins said he started having Blaney back off the throttle to save fuel with about 13 laps left in the race.

“I think everybody was just about out of gas at the finish,” he said. “We were struggling all the way to the finish line. If we hadn’t had done that, we wouldn’t have finished.”

One week into the new season, Blaney and his Wood Brothers team sit second in the series standings, 12 behind leader Kurt Busch.