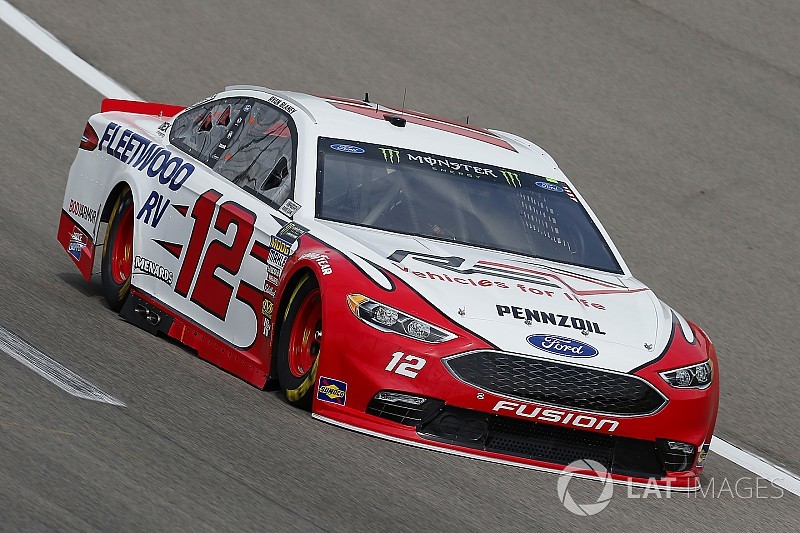 Ryan Blaney held off a furious charge from Kevin Harvick to claim the Stage 1 victory at Kansas Speedway.

Twice in the final five laps of the 80-lap stage, Harvick was able to get to Blaney’s rear bumper but Blaney held on for his third stage win of the 2018 Monster Energy NASCAR Cup Series season.

Harvick, who started on the pole, took early command of the race, and began lapping traffic after 14 laps.

On Lap 28, Harvick put Matt Kenseth a lap down. Kenseth was making his debut in Roush Fenway Racing’s No. 6 Ford this weekend.

A NASCAR-mandated competition caution was displayed on Lap 31, during which Kenseth received the free pass and returned to the lead lap. William Byron was the first off pit road, taking only two tires, and would have inherited the lead but was penalized by NASCAR for an outside tire violation.

Instead, Blaney took over the lead on the restart on Lap 36. He was followed by Harvick and Keselowski.

On Lap 43, Kasey Kahne appeared to hit the wall of Turn 2 but he continued on and the race remained green.

With 30 laps remaining in the stage, Blaney continued to hold an advantage over Harvick, followed by Keselowski, Logano and Almirola.

On Lap 62, Jimmie Johnson dropped down to pit road under green with what he believed to be a loose wheel. “Yeah, guys, it’s getting really bad,” Johnsons said over his team radio. When he rejoined the race he was in 29th, one lap down.

With 10 laps remaining in the stage, Harvick began closing in on Blaney for the lead.

Darrell Wallace Jr. fell off the pace with five laps remaining in the stage with what appeared to be a flat right-rear tire.

Larson had to start the race from the rear of the field after his team was forced to change tires after Friday’s qualifying session.

Ross Chastain’s No. 15 Chevrolet had difficulty getting fired on pit road and joined the field after the green-flag dropped.