NASCAR Roundtable: Who will be champion? 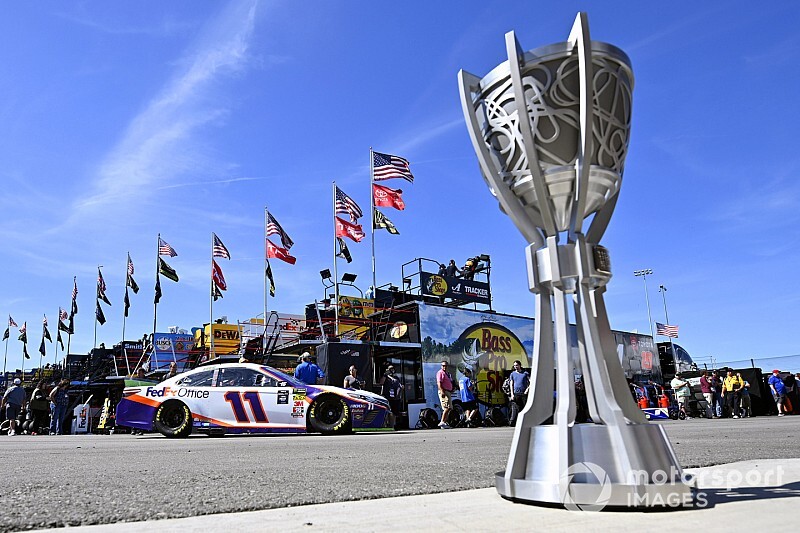 The NASCAR Roundtable returns ahead of this weekend's title-decider at Homestead-Miami Speedway (Fla.), where we make our final picks for the championship.

Along with Jim Utter and Nick DeGroot, we welcome Motorsport.com Editor-In-Chief Charles Bradley and special guest Chris Knight of Catchfence.com to this week's edition of the NASCAR Roundtable.

1. Who is your pick to become the 2019 Monster Energy NASCAR Cup Series champion and why?

Jim Utter: While not who I would envisioned picking six months ago, I'm going with Kevin Harvick for a few reasons. In the past couple months, his No. 4 Stewart-Haas Racing team has gotten a much better handle on intermediate tracks, which most recently included his win at Texas. Also, the new tire combination at Homestead this weekend was used at Chicagoland and Darlington this season where Harvick averaged a 9.0 finish - highest among the Championship 4.

Chris Knight: This is tough. Looking at the Championship 4 this weekend, it’s a good crop of drivers. Three were in this same boat last year and Denny Hamlin propelled himself into Homestead with a dramatic win last weekend at ISM Raceway.

Before Hamlin positioned himself into Homestead, my heart was dead set on Kevin Harvick and Stewart-Haas Racing. Since Phoenix though, I’ve changed my mind and I believe Denny Hamlin is the guy you’ll have to beat in the Ford EcoBoost 400.

The chemistry between Denny and Chris Gabehart is similar to that of Kevin Harvick and Rodney Childers or Joey Logano and Todd Gordon. Hamlin has speed and the craftiness of Gabehart makes the No. 11 FedEx team a dangerous threat for not only the win – but the championship too. Hamlin can’t beat himself though. The pressure is on Sunday afternoon and its his championship to lose, don’t buckle under the pressure.

Charles Bradley: Before the season I had Kevin Harvick tabbed as champion, but I think I'm going to be proved wrong! It's been such a misfiring year for Stewart-Haas Racing, certainly compared to the Joe Gibbs-run Toyotas. So, unless they hit the jackpot like in Texas a few weeks ago, I'm not convinced his car is going to be in the right downforce window for Homestead, whereas Gibbs gets it right more often than not. I just have a sneaky suspicion that Denny Hamlin is going to shock us all again; if he can he as relaxed this Sunday as he was when I spoke with him on raceday morning at the Daytona 500, he can deliver like FedEx.

Nick DeGroot: Denny Hamlin has had quite the season, from winning the Daytona 500 in February to winning his way into the Championship 4 just last weekend. He has momentum on his side and unlike the other three drivers in contention, he is going after his first title. It's slipped through his fingers before and although I think it he has a good chance to avoid another 'what if' scenario, if anyone is going to beat him it's going to be his teammate Martin Truex Jr.

Truex has more wins than any driver this year and drove a solid race at Phoenix with "half a team and an old car" as he said. Truex and Cole Pearn are a combination that have done this before, winning the 2017 title and coming just one position short of going back-to-back in 2018. And that was before they joined the juggernaut that is Joe Gibbs Racing. So that is my pick -- Truex will become the first multi-time champion under this knockout playoff format on Sunday.

2. Who is your pick to become the 2019 Xfinity Series champion and why?

Jim Utter: It's hard to discount the dominating performance Christopher Bell has put in from start to finish this season, but I can't disregard the vast improvement Cole Custer has shown this year. Not to mention, in his last two starts at Homestead, he's finished first and second, won one pole and led a large number of laps in both races.

Sure, he can be beaten, but I think it’s going to take something disastrous for that to happen. What really sealed me on Christopher Bell was his flawless performance at Texas Motor Speedway last month. As a driver, everything just seems to flow with him. Even though Bell floated into the Championship 4 last year with a must-win at ISM Raceway, he didn’t have the car in the season-finale to compete with the likes of Cole Custer and the eventual champion Tyler Reddick.

Make no mistake about it, Custer, Reddick and Justin Allgaier will give Bell a run for the trophy, but this year though, Bell’s crew chief Jason Ratcliff has had weeks if not months to prepare for Homestead. Like Denny Hamlin, likely the only thing that will stop Christopher Bell from becoming the Xfinity Series champion is beating himself.

He had nothing to lose last weekend at Phoenix and mistakes kept him from Victory Lane. This weekend, he has to be flawless, much like he’s been most of the season and odds are, he will be.

Charles Bradley: This year Tyler Reddick is going to feel much more pressure than last, so despite his inherent speed at Homestead I'm going to rule him out. I admired how Justin Allgaier really got the job done in Phoenix, but I can't see past Christopher Bell and Cole Custer for the title – and it's almost the flip of a coin between them. I'll go for Bell, but I think this will be even closer than the Cup decider!

Nick DeGroot: Tyler Reddick flew under the radar last year and some would even saw earned the championship on a fluke. Well he fooled us once and I'm not letting him fool me again. Reddick has proven this year just how much of a legitimate threat he is and on Saturday, he'll do it gain when he beats out Bell, Custer and Allgaier for his second consecutive championship.

3. Who is your pick to become the 2019 Gander Outdoors Truck Series champion and why?

Jim Utter: This is my toughest pick. While I think Ross Chastain has shown the ability to come up big this season and winning his first NASCAR title would be a great story, I think Brett Moffitt experience of winning the title one year ago will pay off at the end.

Chris Knight: It’s a good group of Truck Series Championship 4 contenders, but I expect Brett Moffitt to go back-to-back. It doesn’t seem to matter what happens, Moffitt always seems to show his cards when it counts most.

Yes, I’m sure most expected to see a little bit more from Moffitt at GMS Racing this season – but the team has done its job since aligning at the beginning of the season and that was giving Maury Gallagher another chance at a Truck Series championship. His stiffest competition will likely come from Ross Chastain – the perfect underdog story of 2019 with his Niece Motorsports team, but when it comes to high pressure situations, Brett Moffitt is the guy I want on my side.

Charles Bradley: The smart money is on Brett Moffitt with good reason. But my mother always said I was never born with any commonsense, so I'm going all-in on Ross Chastain. Let's see a watermelon smashed on Friday night!

Nick DeGroot: Brett Moffitt is the obvious choice as the reigning champion. He has enjoyed another strong year since joining GMS Racing, but there's a wildcard element here. Ross Chastain. This driver has taken a very unusual path to the Championship 4, starting out 2019 declared for the Xfinity Series before jumping into the Trucks mid-season and starting from scratch. He is a highly aggressive driver who is willing to go as far as possible and then some to capture the checkered flag. Chastain has never been in this position before but considering what he does when a win is in sight, I believe not even Moffitt will be able to deny him when he 'presses the attack' and goes for a championship Friday night.

4. Whether you believe a non-playoff driver will win the Cup season finale or not, who would be your most likely candidate to do so?

Jim Utter: I've felt William Byron has been ripe for his first NASCAR Cup Series victory most of the season half of this season. Not only do I think Byron could become the spoiler in the season finale but I think 2019 will become the first year under this format where the series championship doesn't win the race.

Chris Knight: Time and time again, Homestead seems to boil down to one thing, handling. You can be great in daytime but if you haven’t set your car up for night at Homestead-Miami Speedway, you won’t have a chance to win the race or the championship.

Yes, I expect at times on Sunday, we’ll see the Championship 4 contenders, first through fourth, but when push comes to shove and the checkered flag nears, a driver like Kyle Larson or Joey Logano will come knocking. Larson just can’t seem to make it to end of the race without damaging his car with wall contact, so I suspect Logano who likely is still miffed about not having the opportunity to defend his Cup title is the likely candidate to spoil the parade at the front and win the Monster Energy NASCAR Cup Series season finale.

Charles Bradley: Kyle Larson. If that outside lane comes in as expected, you might not see him for dust. If it doesn't come in, the dust you'll see is him hitting the wall!

Nick DeGroot: Kyle Larson is a driver constantly in the discussion at Homestead, despite never winning there before. He will be in the mix as he has been in the past, but he wouldn't be my pick. I doubt a non-title contender will win as it has not happened since the introduction of this format in 2014, but if it happens, it will be Joey Logano. He won this race in 2018 and just missed out on being part of the Championship 4 again this year. He has a statement to make and is fully capable of mixing it up with the four finalists.