Childers, 46, was right – he has enjoyed immense success in the Cup Series, but instead it has come as crew chief.

That role may not have been the NASCAR future Childers first envisioned but it has become one he has fully embraced and earned the respect of fellow crew chiefs and drivers in the process.

In Sunday’s playoff race at Talladega (Ala.) Superspeedway, Childers will crew chief his 600th Cup race as he directs driver Kevin Harvick and the No. 4 Stewart-Haas Racing team.

“When you first start in this sport and you’re trying to work your way up, you just never know where you’re going to end up and how it’s going to go and what opportunities you might get,” Childers said.

“To look back on it and say that you’ve crew chiefed 600 races in the Cup Series is kind of crazy. Everybody goes through ups and downs and you wonder how it’s all going to go.” 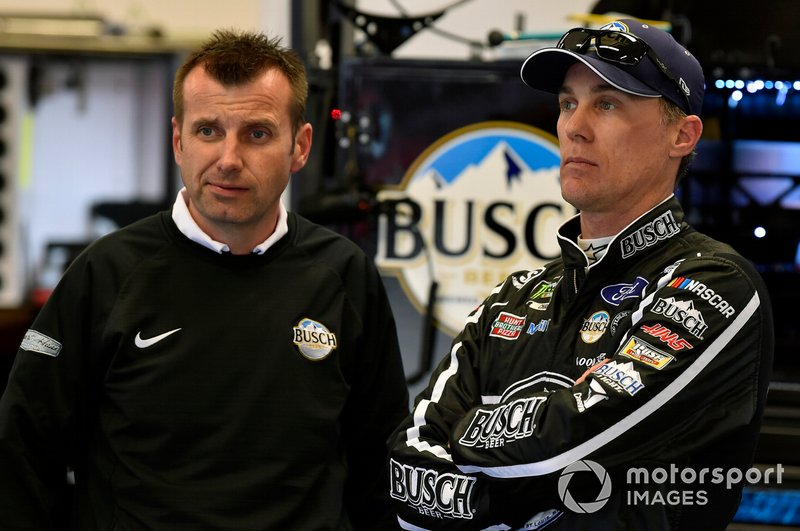 Growing up, Childers’s racing career began as a driver – and a good one at that. He won seven karting championships in South Carolina and five championships at the national level before moving to Late Model competition in 1997.

Between 1999 and 2002, he made several starts in the NASCAR Southeast and Hooters Pro Cup series and one start in what is now the Xfinity Series. The on-track success became much more elusive, which led to a revelation.

“I think it was a case of finally growing up,” Childers said.

From the driver's seat to atop the pit box

He had always worked on his own cars and had worked as a crew chief for several other competitors while racing himself. He soon got his first job in NASCAR with Penske-Jasper Racing as a mechanic.

He quickly found a new calling.

Childers’ first race as a crew chief came in June 2005 as he led driver Scott Riggs’ team at Michigan for MB2 Motorsports.

More than 17 years and 598 races later, Childers has won 40 races and one series championship. While he has worked with eight different Cup drivers, 37 of his wins and the 2014 title came with Harvick – a pairing that will hit 314 races at Talladega.

Together, Harvick and Childers are currently the longest tenured driver/crew chief pairing in the series and rank eighth-longest in NASCAR history.

“I think everybody knows that my career definitely changed when Kevin wanted me to do this, and to be able to do it for a long time and win a lot of races and all that has been pretty special,” Childers said.

“I can remember when I was younger, when I first got into this sport, people like Rusty (Wallace) and different people were having their 600th starts, you’re like, ‘Holy crap, they’ve done this for a long time.’

“Now it’s come to fruition for me, and it’s like, ‘Man, it’s definitely been a while,’ but it’s flown by at the same time.”

Harvick, who won two races this season after snapping a 65-race winless streak but was eliminated from the playoffs after the first round, said he and Childers have what many might think is an atypical relationship.

“Rodney and I are pretty much the same age with a very similar background, as far as racing goes. But we’re kind of opposites in that he’s very calm, cool and quiet, and I’m kind of rambunctious and full of excitement,” Harvick said.

“I think that pairing has brought a lot of respect just because I know his demeanor, he knows my demeanor, and it’s kind of a good balance in the middle.”

That balance has help guide the duo to great success and also lead them through difficult struggles such as last year’s performance issues at SHR and the transition this season to the Next Gen car.

“I think a lot of that just falls into the understanding that we know each of us can do the job, and we believe in that and each other, and a lot of that comes down to conversations, being able to communicate,” Harvick, 46, said.

There is still plenty of time for Harvick and Childers to add to their list of accomplishments.

Harvick has at least one more season on his contract with SHR and Childers easily could continue to work with another driver even after Harvick decides to retire as a fulltime competitor.

Childers said he feels “pretty fortunate” to be able to serve as a crew chief in the Cup Series for as long as he has.