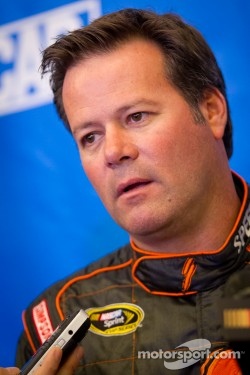 Charlotte, NC (February 16, 2012) - While some competitors use the NASCAR off season to recharge their batteries, Robby Gordon is racing in anything he can get behind the wheel of. Gordon, one of the best off-road racers in the world, participated in the 2012 edition of the Dakar Rally; in which he placed fifth overall. A week after his return from South America, he won the Best in the Desert Parker 425. Truly a racer to the core, Gordon rounded out his “off season” with the ultimate desert race, the King of the Hammers.

Now his sights are set on the pinnacle of racing, the 54th annual Daytona 500. Having fallen out of the top 35 in owner’s point, Gordon and crew will head to Daytona Beach with one thing on their mind – to qualify for the biggest race of the year. Gordon will be piloting the No. 7 Mapei / Menards Dodge Charger in his 24th attempt at the famed 2.5 mile tri-oval.

“Daytona is the 17th race of the 2012 season for us,” says Gordon who’s hoping to carry the momentum from the off-road program to his stock car efforts. “Racing is still my passion and in order to brand our product, SPEED Energy, we need to race. We are fortunate to have Mapei and Menards on board for the 500 and I look forward to the challenge of putting our car into the show,” he continues. The restrictor plate races have been good to Robby Gordon Motorsports, who feels they have something to prove. “We’ll see how the new NASCAR rules break up the two car draft, but if not, we certainly have a fast car that can be pushed to the front,” Gordon remarked.

Past Daytona performances – Robby Gordon made his Daytona debut in the 1991 Daytona 500. Since that time, Gordon has competed in 23 events at the 2.5 mile superspeedway. In the 2003 Daytona 500, Gordon recorded his best qualifying position in 3rd place and went on to finish the race in 6th place. Gordon later tied his best finish of 6th in the 2008 July event at Daytona.

Are multi-car teams beginning to suffer?

NASCAR team owner Rick Hendrick said he’s willing to do whatever it takes to make safety improvements to the Next Gen car as soon as possible.

With a big shove from Erik Jones on the final lap, Chase Elliott cleared for the lead and just edged Ryan Blaney to win Sunday’s NASCAR Cup Series race at Talladega (Ala.) Superspeedway.