Richmond victory was a personal one for Martin Truex Jr. 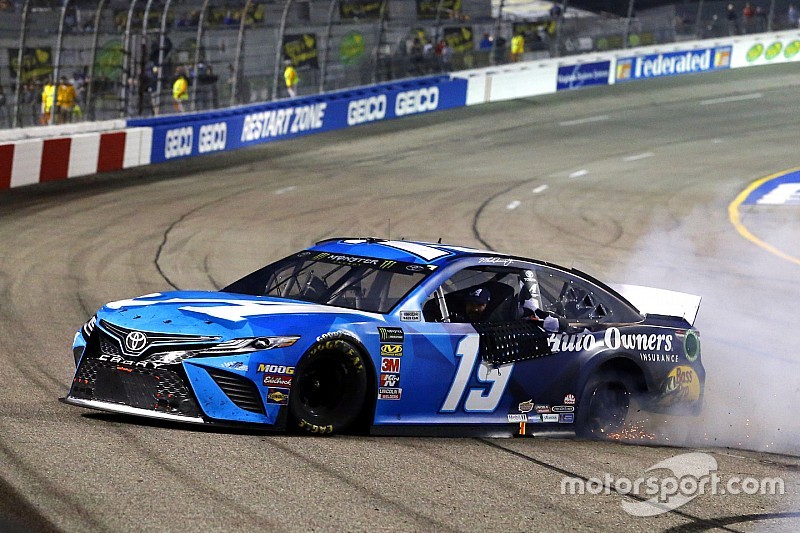 Yes, Martin Truex Jr. had gone 0-for-80 in short track races in the Monster Energy NASCAR Cup Series but his win Saturday night at Richmond was far more personal.

Of course Truex would have liked a short track win before now, but he already owned a series championship and had compiled 19 career wins before his victory at Richmond (Va.) Raceway.

A short track victory would be nice but it’s certainly not a gaping hole in a career resume.

It wasn’t so much Truex hadn’t won on a short track, but he hadn’t won at Richmond – a track where he has dominated in recent seasons but always seemed to find a way not to end up in Victory Lane.

Saturday night’s win was important for several reasons, including earning his first victory as a member of Joe Gibbs Racing.

But turning into Victory Lane at Richmond, even if this time he didn’t have the dominant car, was especially gratifying.

“It would be one thing if we weren’t good on short tracks and I didn’t know what I was doing and we ran terrible and we wrote them off,” Truex explained. “For me it was personal because we’ve been so close and we had so many heartbreaks – really, really, really tough losses at places like here and even Martinsville last fall and Bristol.

“It seems like we’ve had a lot of issues here for a reason. Things just not working out the way we needed them to. We had one year we led the whole thing until coming to the white flag and somebody scraped the wall and there’s a caution and then we got beat out of the pits and completely destroyed on the ensuing green-white-checker.

“I mean, it’s just things like you can’t believe that have happened to us here.”

The “coming up short” list at Richmond has been a difficult one.

In his five Richmond starts prior to Saturday night, Truex had led a combined 675 of a potential 900 laps raced.

In this race last year, his team had problems during a pit stop with nine laps left and he ended up 14th after leading 121 laps. Last fall, a penalty dropped him to the back before he managed to rebound to finish third after leading 163 laps.

“Honestly, it’s awesome to finally get that first win not only on a short track but here at Richmond, at a track where we’ve been so strong the last couple seasons and led so many laps and had some real, real heartbreakers,” he said.

“Sometimes those things are – they’re hard to get through, but they make you stronger and make you appreciate the good days.”

As if redemption at Richmond wasn’t enough, Truex was also able to silence the doubters about whether he and crew chief Cole Pearn could still perform following their move from Furniture Row to JGR in the offseason.

Truex had two runner-up finishes already in 2019 but had led a total of 14 laps of competition prior to his 186 laps out front in his win Saturday night.

“Being so close to winning a couple times this year already, any time you can win, it’s special,” he said. “These things are so difficult. I know everybody knows it’s hard, but I just don’t know if people understand the level of difficulty in this series and what it takes to win.

“I’m just really happy for everybody involved and really thankful for a great opportunity to work with a great team and a lot of great people.”

The other side of Alex Bowman - Part 4