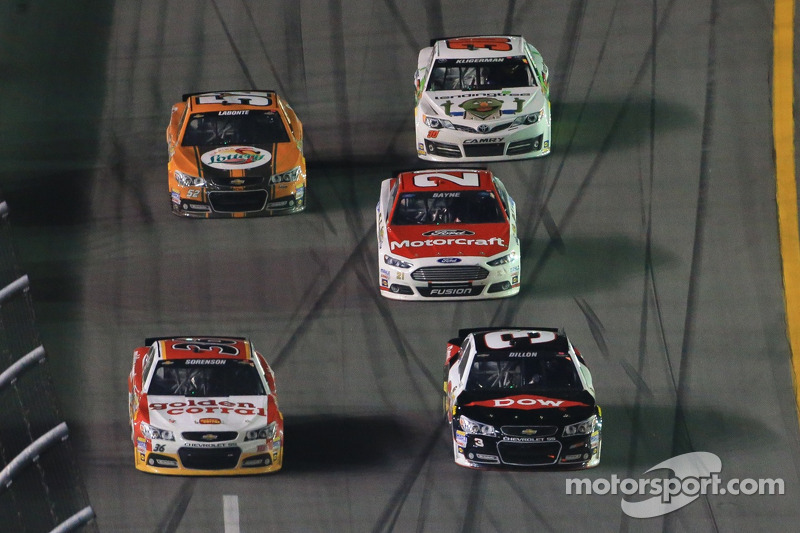 Austin Dillon drove Richard Childress Racing's No. 3 Dow Chevrolet SS to a ninth-place finish in front of a prime time audience of Fox viewers on Sunday evening. The Welcome, N.C., driver kicked off his inaugural season in the NASCAR Sprint Cup Series in spectacular fashion by earning the pole award for the Great American Race. At 23 years, 9 months and 20 days, Dillon is the youngest pole sitter in Daytona International Speedway Sprint Cup Series history, eclipsing a record previously held by Jeff Gordon. 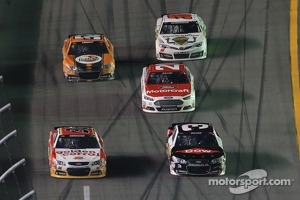 After leading lap one, the third-generation racer dropped towards the rear of the field in order to abide by the Gil Martin-led team's conservative race strategy for the start of the 200-lap affair. He was scored in the 10th position when a storm system caused NASCAR officials to stage the 43-car field on pit road and display the red flag, delaying on-track activity for 6 hours, 21 minutes and 40 seconds until the rain subsided. Green-flag racing continued on lap 47 and Dillon continued to play a conservative strategy around the 2.5-mile superspeedway, making routine pit stops for tires and fuel when directed by his RCR team.

On lap 145, Dillon was punted from behind and spun across the track but avoided major damage to the black, white and red No. 3 machine. He made multiple trips down pit road for repairs and was able to rejoin the field in the 19th spot when racing resumed on lap 153. Dillon avoided major mechanical damage during additional on-track incidents to eventually post an ninth-place finish in the No. 3 Dow Chevrolet.

AUSTIN DILLON (Start - 1 / Finish - 9 / Laps Led - 1 / Points - 9): "I think the yellow rookie stripes on the bumper of my Dow Chevrolet showed a little bit tonight, but we made it through it. It was fun and I had a blast. The car was fast. After we got in the wreck, I don't know how we didn't hit the wall. We had a little damage, but mainly the car was just a lot freer after the incident. Our car was still fast, just a little loose. I want to congratulate Dale Earnhardt, Jr. on his win tonight. He has been so supportive of me bringing back the No. 3 into the NASCAR Sprint Cup Series. I've gone to him for a lot of advice lately. I can't thank him enough. He's been awesome to me. It made this whole transition a lot easier. If we didn't have him on-board, it would have definitely been tough to do this, so I want to thank him and congratulate him."

Paul Menard and the No. 27 Peak/Menards Chevrolet SS team started the 56th running of the Daytona 500 in 10th place at Daytona International Speedway. After the green flag waved under overcast skies, Menard quickly worked his way into the top five and remained there, and the top-10, for much of the early going. Even a six hour and 22 minute rain delay that started on lap 38 didn't dampen their determination to have a great race as he led three time for 29 laps.

The impressive run was cut short after the team's third stop taking on right side tires, fuel and a chassis adjustment. While running 17th on lap 145, he was caught up in a multi-car wreck that caused damage to the left-front fender and nose of the Richard Childress Racing Chevrolet.

After a quick stop on pit road to check out what needed to be repaired, crew chief Slugger Labbe determined they had to go to the garage to replace the radiator and make other repairs to the left front. Paul returned to action 14 laps later and managed to gain three positions to finish 32nd when the checkered flag waved.

PAUL MENARD (Start - 10 / Finish - 32 / Laps Led - 29 / Points 30): "We had a really fast car for this race, we could run the bottom better than the top, but were fast in both lanes. I would like to thank everyone at RCR and ECR (ECR Engines) for all the work they put into this Peak/Menards Chevrolet. We led some laps and then got caught up in that wreck towards the middle of the pack. It's typical Daytona, but it felt good to lead laps and know we brought a good car here. I wish the ending was a little different for us, but it wasn't meant to be this time."

Fortunately, there was a break in the weather and NASCAR ordered drivers to re-fire their engines at 8:30 p.m. Eastern. At the race's halfway point, Newman drove as high as the fourth position and was on mark to contend for a second Daytona 500 victory, but lost significant track position after being collected in two multi-car accidents on laps 161 and 194. The CAT Racing team led by Luke Lambert made the appropriate repairs on pit road to enable Newman to finish the race in 22nd place. Next Sunday, the No. 31 team will be back in action at Phoenix International Raceway for the second NASCAR Sprint Cup Series race of the season.

RYAN NEWMAN (Start - 19 / Finish - 22 / Laps Led - 0 / Points - 21): "I honestly don't know what I could have done differently. I guess we could have taken a risk and raced to the front and led some laps. But it's all a matter of luck. It is what it is. This is restrictor-plate racing. I am looking forward to getting back on track and racing at Phoenix. I've won there so I am looking forward to seeing what this RCR team can do there."