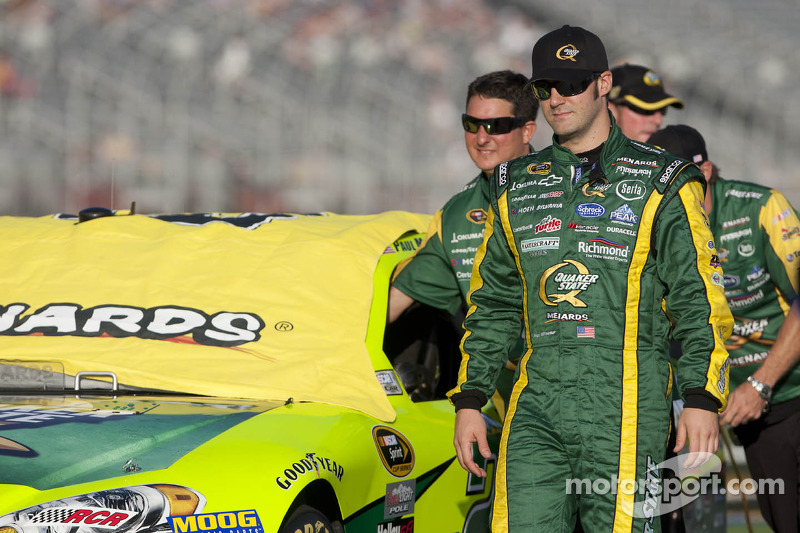 
This Week's SYLVANIA/Menards Chevrolet at New Hampshire Motor Speedway ... Paul Menard will pilot Chassis No. 349 from the Richard Childress Racing NASCAR Sprint Cup Series stable in this weekend's SYLVANIA 300. This Chevrolet was raced earlier this season at New Hampshire Motor Speedway (July) where Menard finished 17th and Martinsville Speedway in April where he finished 26th. 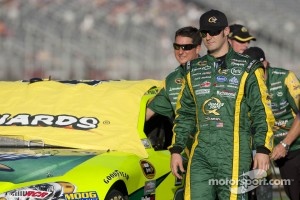 At New Hampshire you need to find the right package. You're hard on the brakes there. The track is flat with tight corners and long straightaways. You need to have the right setup on the car in order to get down the straightaways and through the corners."

What went right for you during the LENOX Industrial Tools 301 in July? "We were able to find a good package during practice so we weren't far off for where we needed the car to be for the race. During the race we didn't have to take any big swings with changes, we could focus on fine-tuning the handling."

What are you looking for in a package in order to get through the corners well at New Hampshire Motor Speedway? "Usually, we fight how well the car is turning in the center and are looking for more front grip. You need to have good drive off, which we didn't fight last time. We were mostly just tight in the center of the corners in July and needed to get the car to rotate better."

Is New Hampshire Motor Speedway like a Martinsville Speedway and how much brake do you use there? "We use a lot of brake at New Hampshire (Motor Speedway). It's not as much brake heat as it is brake pad wear. The materials used for the brakes keep getting better, so they last longer and longer. It's definitely one of the hardest places on brakes as far as wearing out the brake pads. There's usually not much left by the end of the race."


Kevin Harvick will pilot Chassis No.400 from the Richard Childress Racing NASCAR Sprint Cup Series stable in this weekend's SYLVANIA 300. Built new for competition during the 2012 season, this RCR Chevrolet will make its first competitive laps this weekend at New Hampshire Motor Speedway.

What is the key to running well at New Hampshire Motor Speedway? "The hardest thing is just making your car turn in the middle of the corner and being able to have enough forward drive off the corners. It always seems like the New Hampshire race comes down to a track position strategy call on two tires or four tires toward the end of the race. Track position will play a big part, but getting your car to handle right will probably play an equal part."

What do you like about racing at New Hampshire Motor Speedway? "I always look forward to going to New Hampshire. I like that type of track because it's flat, similar to the tracks out west where I started my racing career. There's a lot of braking. You have to really work on getting your car through the center of the corner and still have the forward drive you need up off the corner."

How has the track's aging affected racing at New Hampshire Motor Speedway? "I think when they changed the race track it made the racing better. It gave you some more options and I think as the track has aged since they've done that, the biggest bumps on the track are going into turn three, so those have gotten a little bit worse. But all in all it hasn't changed a whole lot."


Jeff Burton will race Chassis No. 382 from the Richard Childress Racing NASCAR Sprint Cup Series stable this weekend. This No. 31 Chevrolet was utilized in February at Phoenix International Raceway where engine issues thwarted Burton's top-five run and relegated him to a 33rd-place finish.

This was car also raced at Richmond International Raceway in May where an on-track incident knocked Burton and the No. 31 team out of contention, forcing them to settle for a 31st-place finish. Most recently, Burton piloted this machine to a 21st-place finish at New Hampshire Motor Speedway in July and he notched a top-10 finish at RIR two weeks ago, finishing sixth.

It's definitely a tough race track. The car must turn in the middle of the corners at New Hampshire Motor Speedway. Rear grip has become less of an issue since we first started racing there. When we first started going there, rear grip was everything. If you could accelerate off the corner before your competitor, you were in good shape.

You are a four-time race winner at New Hampshire Motor Speedway. Are you surprised that you haven't got the finishes you've expected there recently? "We've run really well in most of the races at New Hampshire (Motor Speedway). Recently, we haven't performed well there at all though. Two or three years ago, I thought we had the race won.

We were leading the race and pitted and no one else did. So we ended up losing it. We just played the wrong strategy. We've run well there, just not on a consistent basis lately."

How do you try to win races on a weekly basis while helping your Richard Childress Racing teammate, Kevin Harvick, win a NASCAR Sprint Cup Series championship? "The best way we can help Kevin (Harvick) win a championship is to run well. If we run well, we can provide valuable feedback and information for his team to use. If we aren't running well, we aren't going to be able to help much on Sundays. The help will come Monday through Saturday by providing information to make all RCR teams better."

This Week's OneMain Financial Chevrolet at Kentucky Speedway ... Elliott Sadler and the No. 2 OneMain Financial team will unload Chassis No. 117 from Richard Childress Racing's NASCAR Nationwide Series stable this weekend. This chassis has one previous start this season at Indianapolis Motor Speedway in July, where Sadler was black-flagged as the leader and settled for a15th-place finish.

What are your thoughts on Kentucky Speedway? "I really like Kentucky Speedway. Last year, we sat on the pole and ran well there. We missed it a little bit here in the spring, but we have worked on our set up, and I think we have an awesome package for this weekend.

I think that any 1.5-mile track that we go to, we have a great shot at Victory Lane. We are taking the car I drove at Indianapolis Motor Speedway, which was really fast. We will feed off our RCR teammate Austin Dillon, who won there last time, and our OneMain Financial team feels really, really good about this weekend."

Austin Dillon will pilot Chassis No. 102 from the Richard Childress Racing NASCAR Nationwide Series stable. This is the same Chevrolet Dillon drove to his first-career Nationwide Series victory at Kentucky Speedway in July after starting on the pole.

Why do you think Kentucky Speedway is such a good track for you performance-wise? "I really don't know. I think my dirt racing background plays a factor. I get through the bumps really well. The characteristics of the track help me. I think we definitely have a shot at having another dominating performance.

Our car was really good at Kentucky Speedway in July, and I think it's going to be even better this weekend. RCR has a really strong 1.5-mile program, and I'm looking forward to having the opportunity to gain some points this weekend."

What do you need to do in order to have a shot at winning the championship this year? "I think with the way the points structure is set-up, you have to take risks now to run up front. The way teams take two tires at the end of the race is a good example. Risks are involved every week, and we'll definitely be taking some risks to win it.

You want to do whatever it takes to be up front at the end and have a chance on that last restart to go after it. If we do our job at Richard Childress Racing, we'll be there at the end of the season and shouldn't have to take more risks than we do every week. That's our plan, to be there at the end."


Brendan Gaughan will pilot Chassis No. 089 from the Richard Childress Racing NASCAR Nationwide Series stable. This Chevrolet was utilized by RCR teammate Elliott Sadler at Auto Club Speedway in March where he started fifth and finished 10th.

What are your thoughts on returning to Kentucky Speedway? "Kentucky (Speedway) has always been one of my best 1.5-mile tracks, even during my worst season I ran well at Kentucky. The track is flat and bumpy and you lose grip very quickly, which suits my driving style just fine.

I miss that style of racing where the tires wear out quickly and the driver's skills come into play. I think Kentucky still has that "old school" feel and I can't wait to get back there with the guys on the No. 33 team and see what we can do."


Tim George Jr. will pilot Chassis No. 021 from the Richard Childress Racing NASCAR Camping World Truck Series stable this weekend in the Kentucky 201. This Chevrolet was last raced at Kentucky Speedway in June where George Jr. started 15th and finished 24th. George earned the pole award with this RCR Chevrolet at Kansas Speedway in April and went on to finish in the 17th position.

This chassis was also driven by Austin Dillon at Pocono Raceway in 2010, where he finished seventh after starting fourth. Dillon also drove this Chevrolet during the 2009 season at Iowa Speedway and New Hampshire Motor Speedway finishing 12th and 15th, respectively.

What are your expectations for this weekend's event at Kentucky Speedway? "Kentucky Speedway has some similarities when compared to Kansas Speedway. We had a really fast truck at Kansas Speedway and qualified on the pole. We'll have good notes to use from the last time we were in Kentucky to start off with in practice on Friday. I think we can go out there this weekend and compete in the top 10."

You finished third in June when the NASCAR Camping World Truck Series visited Kentucky Speedway, what are your thoughts heading there this weekend?"I'm excited to be able to race back-to-back weekends these past few weeks.

It helps keep the momentum going with the team. Kentucky (Speedway) is a fun track, and I enjoy racing there. We had a fast truck when we were there in June and have a good place to start for when we get back to the track this weekend. I hope to better that top-three finish this time around."


Joey Coulter will pilot Chassis No. 024 from the Richard Childress Racing NASCAR Camping World Truck Series stable in Friday night's Kentucky 201. This RCR-prepared Chevrolet last ran at Chicagoland Speedway in July where Coulter started second and finished in the 15th position. Coulter also drove this Chevrolet to two top-10 finishes at Charlotte Motor Speedway in May and Texas Motor Speedway in June.

What are your thoughts on Kentucky Speedway? "Kentucky (Speedway) is a fun place to race. RCR has put together a good 1.5-mile package for the trucks this year, and I'm excited to get there and see what the No. 22 team can do this weekend. We didn't have the finish we hoped for last weekend at Iowa (Speedway), but I know we can regroup and try again on Friday."

Allmendinger: Road to recovery ends as NASCAR lifts his suspension