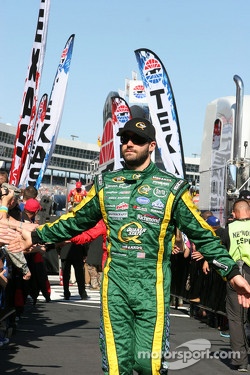 Kansas Speedway, Kentucky Speedway and Las Vegas Motor Speedway are the other tracks on the current Sprint Cup Series schedule where RCR is still on the hunt for hardware.

Get to the Points ... Following the AdvoCare 500 at Phoenix International Raceway, Harvick, who represents RCR in the 2012 Chase for the NASCAR Sprint Cup, is ranked eighth, 86 points out of the top spot.

As we head to Miami-Homestead Speedway for the last race of the 2012 season, has the year gone fast or slow for you? "Every year I get older and the years go by quicker.

That's just the way it is, so I'm told. This year went by faster than last year, and I'm sure next year will go by even quicker."

Are you happy that this season is coming to an end? "It's always bittersweet when the season ends. I feel like we have a lot left to accomplish, but it will be nice to have a restart for next year, too."

Last year you earned your best finish to date at Homestead-Miami Speedway. Are you more comfortable there now? "Every week is different in this sport.

We could run really well or really bad, it just depends on the week. We just need to do all the preparation and hope for a good run."

Talk about the challenges and the progressive banking at Homestead-Miami Speedway... "Homestead (-Miami Speedway) is a wide track and has a lot of different grooves that you can run, which is neat for a driver. Other than that, it's kind of a boring race track to be honest."

Going into last year's finale, everyone was aware of the battle between Carl Edwards and Tony Stewart. Did that affect the way you raced because of those two running for the championship? "No, not at all. You don't do anything different than you do at Phoenix (International Raceway) in the second race of the season.

Everyone just tries to get all they can. If they do you wrong, you do them wrong. If they don't, then you don't. Racing those guys in the Chase (for the NASCAR Sprint Cup) doesn't change anything. Ultimately, you want to end the year on a high note to carry into the off season."

What's your approach going into Sunday's race at Homestead-Miami Speedway?"I think for us it's all about going down there and trying to get the best finish we can.

Ideally, we'd love to repeat last weekend and close out the season with back-to-back wins, but overall we want to run the best we can to end the season strong and finish as high as possible in the point standings."

You've had a lot of strong runs at Homestead-Miami Speedway. What do you attribute that to?"Homestead (Miami Speedway) has been a good track for us.

We were good on the flat surface, but have run well with the new configuration, too. Homestead has been one of those tracks we've been fortunate to go to where everything kind of fits the styles of the way our cars are built to run and my driving style.

It's definitely been a good race track for us and we're looking forward to going down there and closing out the season strong this week."

How does Homestead-Miami Speedway fit your driving style? "Homestead (Miami Speedway) is just unique. You can charge turn one a little bit more than you can at most places, because as you get through the corner, the banking seems to get steeper all the way through, and you have options.

Why is Homestead-Miami Speedway one of your favorite tracks? "Homestead (Miami Speedway) is one of those race tracks that you don't know when it is going to stop aging.

It seems like every time we return to the track it loses a little grip, which is a good thing. Since they repaved the track a few years back it has become one of my favorites.

You can move all around trying to find a groove that works for you. There are a lot of different places where you can make your car work. For me it has been a lot of fun to race on."

After a tough season, are you ready for the 2012 NASCAR Sprint Cup Series season to be over? "Honestly, I am. However, I am also excited about the preparations we are making for the 2013 season.

This type of year grinds you down. Having a positive attitude goes a long way, but at the same time you need to be a realist and understand what is going on.

What's the one thing you are most excited about at RCR for 2013? "I feel really good about what we've done structurally for 2013 compared to 2012.

We have a better plan and the people in correct roles who can execute that plan. I'm very encouraged about everything we have going on at RCR."

What are your thoughts on Homestead-Miami Speedway? "It's hard to believe that it is the last race of the season already. This OneMain Financial team has been great to work with.

I love the determination and the heart each member of the team has, and although we head to Homestead with a deficit, we are not out of this championship. We will fight until the end.

We have to finish off what we started, and we are as prepared as we need to be to go out there and make it happen."

What are your thoughts heading into the last NASCAR Nationwide Series race of the season? "At the beginning of the season I said I wanted to go into Homestead-Miami Speedway with a shot to win the championship and that is what we were able to accomplish.

We are just going into the race with the same attitude we have had all year. To try as hard as we can and to do what we can to try and win a championship.

I'm going into this race excited and confident for next year. We have learned so much and to know that we are coming back and have the support of AdvoCare I think next year will be very good for the No. 3 team."

You raced in the NASCAR Nationwide Series at Charlotte Motor Speedway in May. What did you learn in that race that will help you this weekend at Homestead-Miami Speedway? "I learned a lot about how you have to race these cars in traffic. They drive differently than a truck does in the NASCAR Camping World Truck Series.

We earned a top-10 finish in our first Nationwide Series event, and I think we can get another top 10 if not, top-five finish this weekend."

What are your thoughts about racing in the final NASCAR Nationwide Series at Homestead-Miami Speedway? "This is a redemption weekend for me.

We didn't get the result that myself and the team were looking for last weekend at Phoenix (International Raceway) after getting caught up in an incident during the final lap, so my goal is to make up for that and bring home a top-five or top-10 finish.

I can't thank everyone at Richard Childress Racing and South Point Hotel & Casino for giving me the chance to run a handful of races this season. The No. 33 team has worked so hard this season and I'd like to help them end it on a positive note."

What are your thoughts heading into the season finale race at Homestead-Miami Speedway?"I've never raced a NASCAR event at Homestead. We had a good run on the road course in the 2008 Rolex Series with a second place finish.

I spent a lot of time in Miami over the years, and graduated in 2006 from University of Miami. I'm looking to apply what I've learned racing these trucks so far this year to the final race of the season in the Applebee's Chevrolet."

You earned a sixth-place finish at Homestead-Miami Speedway last November after starting from the second position. What are your thoughts heading into the season finale race? "We're going to do our best to win this race. We had a good truck there last year, and we've had some success on the 1.5-mile tracks this year.

We have one more race to claim the championship, and I know we're going to fight hard to win it for RCR."