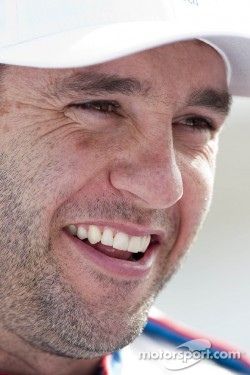 WELCOME, N.C. (January 25, 2012) - General Mills and The Kroger Co. announced today it will partner with Richard Childress Racing and veteran driver Elliott Sadler on the No. 33 Chevrolet for the 54th annual Daytona 500 on February 26, 2012 at Daytona International Speedway.

"It's great to be back in the Daytona 500. I've had a lot of success in this race in the past and want to thank General Mills, Kroger and Richard Childress for this opportunity," said Elliott Sadler. "When we started putting this program together the first thing that came to mind is how strong RCR's plate program has always been. We're going to go out and have a legitimate chance to win the race. Speedweeks can't get here soon enough!"

General Mills, entering its fourth year of partnership with the Welcome, N.C.-based organization, is teaming up with The Kroger Co. for a special paint scheme celebrating the great brands from both organizations. The special red, white and blue paint scheme adorning Sadler's Chevrolet for "The Great American Race" will feature the Kroger Co. Family of Stores, Fred Meyer Jewelers and several General Mills brands. The Minneapolis, Minn.-based General Mills also sponsors RCR's No. 31 Wheaties Chevrolet in the NASCAR Sprint Cup Series with driver Jeff Burton.

"General Mills is excited to partner with the Kroger Company and Richard Childress Racing to put the No. 33 car back on the track for this year's Daytona 500. Kroger and General Mills have been strong partners over the years and I am pleased that we are continuing to advance the partnership in a whole new way," says Pat Simmons, VP General Mills Motorsports.

"Kroger is excited to partner with General Mills and Richard Childress Racing at the Great American Race, the Daytona 500. We think this is a strong partnership that shows off the great brands and great values that our companies offer to shoppers throughout the US, said Evan Anthony, Vice President of Corporate Marketing and Advertising at Kroger. Add RCR and Elliott to the mix and you've got a recipe for success. We're looking forward to a great race."

Leading the effort for the No. 33 team will be veteran crew chief Gil Martin, RCR's NASCAR Nationwide Series program team manager. Martin has been at RCR since 2000 and has served as crew chief for Kevin Harvick, Clint Bowyer, Casey Mears, Kerry Earnhardt and Robby Gordon. He is one of a select few crew chiefs to win races in NASCAR's Sprint Cup, Nationwide and Camping World Truck Series.

"We're looking forward to having Elliott, Kroger and General Mills team up on the No. 33 Chevy with Gil serving as crew chief for this year's Daytona 500," said Richard Childress, president and CEO of Richard Childress Racing. "General Mills has been a terrific partner over the years, through both its Wheaties and Cheerios brands, so it's great to expand their overall 2012 program by having a car in the Great American Race. We're also excited to have Kroger on board given all their support and strong activation around our sport."

Childress, a two-time Daytona 500 champion car owner, will use owner points accumulated during the 2011 Sprint Cup Series season to field the No. 33 Chevrolet entry. RCR's No. 33 team finished 13th in the final 2011 owner point standings on the power of one win, four top-five and 16 top-10 finishes.