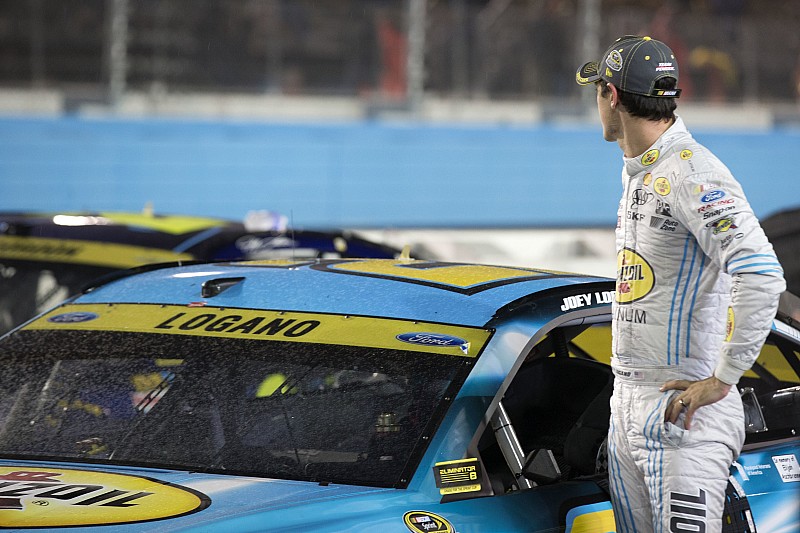 For about 15 minutes, at least some of the Chase contenders in the Eliminator Eight felt they still had a chance of advancing to the Champion’s Round at Homestead-Miami Speedway.

But as the skies opened once again over Phoenix International Raceway, the hopes were dashed for the four phased out of the title and Dale Earnhardt Jr. was declared the race winner.

Carl Edwards was participating in a TV interview when he received the news NASCAR had called the race after 219 laps. He was running 12th when rain ended the Quicken Loans 500 — and in essence his title chances.

There was little the Joe Gibbs Racing driver could do to hide his disappointment — and he left the track before offering additional comment to the media.

His crew chief Darian Grubb was equally frustrated. Edwards trailed Martin Truex Jr. by seven points entering Phoenix. Five points made the difference between the driver of the No. 19 Toyota moving into the final four or racing for fifth in the point standings.

“Just very disappointing for this whole Stanley Toyota team,” Grubb said. “How hard they’ve worked all year to come down to something as simple as a rain out. We feel like we could have raced our way back in there and had a shot at it.

“We were still five points out,” Grubb said. “We knew that was going to be a tough situation, but it ended up that it bit us and I just hate it for these guys. I’m very proud to have had a championship in the past and I wanted to help bring one to these guys who have worked so hard for it.”

Wait until next year…

The Team Penske duo of Joey Logano and Brad Keselowski entered the weekend knowing only one driver was likely to advance to Homestead.

Logano needed a win. And despite all the laps he ran in second-place, it was going to take a miracle or savvy pit strategy to be more than a footnote in 2015.

Yes, Logano’s six wins this season top all competitors and for him it was a career-best year in Sprint Cup, but when it came down to crunch time, the only victory that mattered was Sunday’s Quicken Loans 500.

“You can’t help the weather,” said the ever-optimistic Logano, who finished third. “I guess it wasn’t in the cards tonight, but I’m still super-proud of what this Pennzoil team has done all year. We’ve had super-fast race cars and we really produced on the race track, executed our plan. Once again, this is a high-pressure race for these guys and to see us drive to the front and have good pit stops all night, but it just didn’t work out.

“Overall, I couldn’t be more proud of what we’ve done this year. We’ve still got one more race to win this year. Our heads are still high and it’s been a great season. I don’t have much to say bad about anything. I just want another shot at it and when you’re this close to seeing the lead you want just one more restart. I was hoping they got that wreck cleaned up fast enough to just try to get one more shot at it, but congratulations to race Junior and his team. It’s cool for them, but I wish I had another restart.”

With the way Keselowski’s season has transpired — and particularly following last weekend’s loss at Texas Motor Speedway to Jimmie Johnson with five laps remaining in the race —  he wasn’t shocked by how the evening unfolded.

Keselowski started 18th on Sunday — the deepest in the pack for the eight Chase contenders. Following the six hour rain delay, he said it was difficult getting the No. 2 Miller Ford up to speed especially with limited opportunities to work on the car. Although he led four laps during pit stops, 74 laps later caution slowed the action.

“It was a long day for everybody and to have it end like that wasn’t surprising,” Keselowski. “We kept adjusting on it, but it’s a short race and who knows? Maybe that last run we would have had something, but that’s not the way it played out.

“The highest we can get is fifth in points now, so I’d like to pull that off and take advantage of that opportunity when we get to Homestead next week.”

Kurt Busch and Jimmie Johnson were the only two drivers that could run in the same zip code with Kevin Harvick.

Throughout the weekend, the two Chevys battled for the top of the speed chart — but only Busch had skin in the Chase game.

Polesitter Johnson was to lead the field to the green flag after the initial rain delay and nearly a couple dozen laps to ascertain whether the track was in shape to race. But when Busch beat Johnson to the line by a nose, NASCAR black-flagged the No. 41 Haas Chevy for jumping the start. He served a pass-thru penalty on Lap 8 — after running at the point for the first seven circuits — then dropped to the rear of the field.

"The flag waved and I stepped on the gas," Busch said.

His crew chief Tony Gibson replied, "You can't beat the leader on the initial start.”

Jeff Gordon raised the question regarding the start of the race in the drivers meeting.  But eight laps into event, all that mattered was Busch returning to contention.

In 50 laps, he was back in the top 15. In traffic, climbing into the top 10 was more difficult. When pitstops started on Lap 118, Busch moved up as high as second-place. After the cars cycled out he was 12th but passed Paul Menard on Lap 148 for 10th. He was seventh when Joey Gase wrecked to ignite the second and final caution.

After 219 laps, Busch who remained focussed throughout the race, still wasn’t convinced that his actions at the start were worthy of the penalty.

Just like the other Chasers who were eliminated on Sunday, Busch had hoped the race had returned to green. In the end, all he could do was reflect on the No. 41 Stewart-Haas Racing team’s remarkable year.

“We had a great season,” Busch said. “We won two races, sat on three poles. We did everything possible to put polish on a season like that and get out there with elbow grease and work hard at it.

“Tony Gibson and all these guys at SHR really provided me a car to come out here and do the job we needed to do.”