President Barack Obama honored 2011 NASCAR Sprint Cup Series champion Tony Stewart at the White House on Tuesday afternoon. The ceremony was held on the picturesque South Lawn on the White House grounds. In addition to Stewart, all of the top-10 drivers were on stage with President Obama and Stewart.

I have done it (honored at White House) twice before as a champion, but it is still an honor.

In his brief remarks, President Obama provided serious comments but spiced them with several tongue-in-cheek comments. “This was Tony’s year,” the president said. “He gave us one of the most dramatic finishes we have ever seen after barely making the Chase. In a must win at Miami, he went all out and passed 118 cars, sometimes three wide. As Tony said, ‘He thought he had passed half the state of Florida.’

“In the end, he held on to take the checkered flag and to take the championship. We have all heard about athletes who were going to do whatever it takes to win it all, but back in August with the season winding down Tony predicted he wouldn't (win the championship). Tony’s hero the great A. J. Foyt put it best when he said, ‘The reason Tony won is because he drove the best race of his life.”

The president went on to say that he would like to take a lap around the White House grounds in a stock car some day. “I am still holding out hope that at some point I will be able to get behind the wheel,” he said. “A few years ago, Jimmie Johnson showed me how to start one of these cars and how they worked. What was more impressive he got in and out dressed like he is now, and he didn’t rip his suit.” The president went on to applaud the five-time champion. 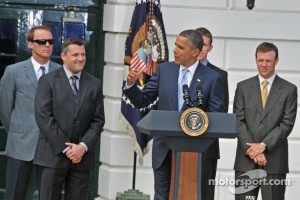 President Obama also recognized Carl Edwards, a member of the president’s Fitness Council, for his driving efforts in the 2011 season and for his work with the council. “He’s an outstanding representative of NASCAR and has a lot of class,” the president said.

The president saluted NASCAR for its efforts in supporting the military. “Michelle (Obama) had a chance to see that first hand at the Homestead race last year,” he commented. “You look out for military families, the Gold Star families and you make regular visits to Walter Reed Hospital to raise spirits there. For you guys to give that much back to folks who have given so much to keep us safe, I want to thank all of you.”

Said Stewart after the ceremony concluded, “At the White House, it is always an honor when our sport gets honored. It is a huge, huge honor and is always fun to get a tour of the different rooms of our White House and to get a refresher of our history, the different presidents and what is so significant about the various rooms.” 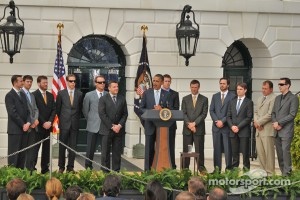 “I have done it (honored at White House) twice before as a champion, but it is still an honor. This is the first time with the other drivers, too, and it is neat. Also, it was fun to go through the tour as a group, as we don’t have the opportunity to be together that much. It was a pretty neat deal for all of us.

“We had the honor during champions’ week in Las Vegas (in November) where he actually called us from Air Force One. That was a neat surprise, and I didn’t realize what was come. He is really passionate about our sport, and it is neat for the leader of our country to be as interested about what we do as we are.”

The South Lawn ceremony didn’t last too long but everyone came away with a warm memory of a day well spent. 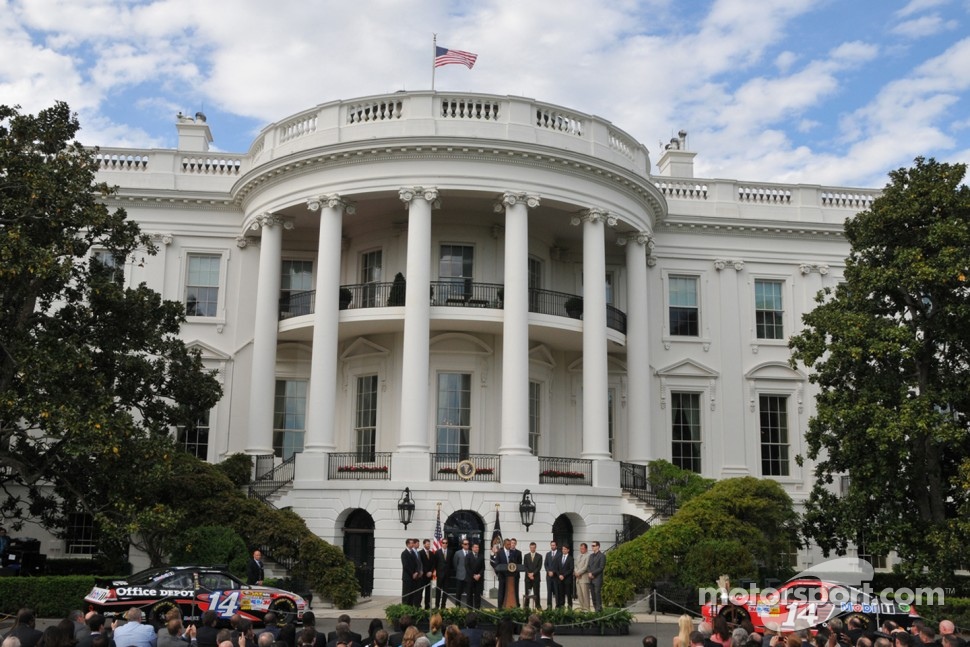 Off night for Stewart in Texas

Clint Bowyer has extra incentive to do well at Kansas Speedway