DAYTONA BEACH, Fla. (June 7, 2012) – Speed – and plenty of it – was the buzz word at Pocono Raceway during the second of two days of NASCAR Sprint Cup Series testing at the newly-paved 2.5-mile triangular-shaped track as teams prepare for Sunday’s Pocono 400 Presented by #NASCAR. 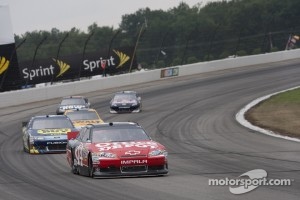 Kasey Kahne put down the overall fastest lap of the test at 179.490 mph during today’s afternoon session. A.J. Allmendinger set the pace in the morning session at 177.190 mph – well ahead of the 175.380 mph fast lap Mark Martin recorded on Wednesday. A total of 41 cars tested today; yesterday 36 cars were on track.

Robin Pemberton, NASCAR vice president of competition, said the test was a success from NASCAR’s perspective.

“It’s been really smooth,” Pemberton said. ”All in all it’s been really positive in the garage area. [The track is] definitely faster but with the amount of grip that’s here, you’ll see the grooves widen out. With the 400 mile race and the outstanding job Goodyear did with these tires, I think we’re in for an exceptional weekend.”

Drivers pointed to the different feel of the track due to the re-pave, both in visual cues and overall speed.

“The race track is very fun in the sense of how they graded it and smoothed it out in different places,” said Denny Hamlin, a four-time winner at Pocono. “It’s still Pocono, but it drives very different than what it used to. You’re getting a feel of a lot of different race tracks here within the Pocono Raceway.

“You’re going to see massive dive bombs going into the corner trying to get position. My estimation – you’re going to see a lot of excitement,” Hamlin said. “Anyone who takes time trials on Friday is going to break the track record (172.533 by Kasey Kahne in June 2004). All the cars should break the track record easily. Really, you drive it totally different than what you used to.”

“When we were here at the tire test (in April) there was only seven of us, it was really cold and not a lot of rubber was getting put down on the racetrack,” Allmendinger said. “With [41] cars out there, there’s a lot of rubber. More than anything, you’re just learning how the track changes and what your car does with that rubber on the race track.”

Some who spoke offered a bit of good news for drivers with rocky Pocono resumes. This version is a bit different than the previous Tricky Triangle.

“It feels like a new racetrack to me,” said two-time Pocono winner Carl Edwards. “Took me a minute to get used to just the different visual cues, and braking points and transitions into the corners. The way you drive into Turn 1, you can be much more aggressive on the throttle, you can be really aggressive on the breaks. It will be an opportunity to really shake things up here. I think the guys that normally run really well here won’t have an advantage any more. It’s a new day.”

There was also reaction to the passing of Cotton Owens, recently selected as a member of the 2013 NASCAR Hall of Fame class. Owens – a noted driver, owner and mechanic – died this morning at his home in South Carolina. He was 88. “Our thoughts and prayers go out to his family,” said Mike Helton, NASCAR president. “Unfortunately we won’t be able to celebrate with him but well be able to celebrate around the contributions he made. He had a lot of passion and turned that passion into ingenuity for NASCAR.

“He was part of that Spartanburg, S.C., crew – David Pearson, Bud Moore – that did so much to blaze a trail for so many of us.”