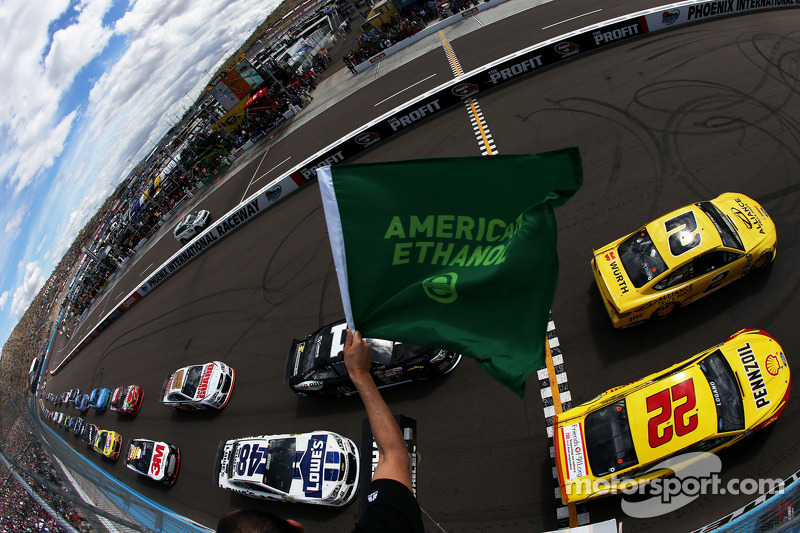 Keselowski proved Sunday that he and Wolfe can be just as effective when they’re separated by a continental divide.

With Wolfe on the pit box on Friday, Keselowski won the pole for Sunday’s The Profit on CNBC 500 at Phoenix International Raceway. After Wolfe flew back to North Carolina on Saturday to witness the birth of his first child, Keselowski ran third in the Sprint Cup race.

“They did a great job,” Keselowski said. “Still had two more spots to go. All things considered, I thought they did really well. I was very proud of the effort.”

Wolfe sent Keselowski a congratulatory text after the driver climbed from the No. 2 Ford.

Not to be outdone, Wolfe also deserved congratulations after wife Aleah gave birth to a son, Caden Paul Wolfe, on Sunday morning.

Oil-dry on the inside lane didn’t prevent Joey Logano from dropping to the inside of the track on the final restart of Sunday’s race, looking as if he were about to take race winner Kevin Harvick and runner-up Dale Earnhardt Jr. three-wide into the first corner.

But Harvick was able to clear Logano and Earnhardt and pulled away to win the race.

“It’s all about the win, right?” said Logano, who finished fourth after losing the third spot to teammate Brad Keselowski. “Really, third place doesn’t mean anything. Last year, you may have taken third place and taken the points.

“This year (with a win all but guaranteeing a berth in the Chase for the NASCAR Sprint Cup), hey, go for it. Overall, the Shell Pennzoil Ford was fast, just not as fast as the 4 car (Harvick). It said ‘Freaky Fast’ (on the side of the car, for sponsor Jimmy John’s), and it wasn’t lying—that’s for sure. We had nothing for him.”

A.J. Foyt, winner of both the Indianapolis 500 and the Daytona 500 in a storied career, has no bigger fan than Tony Stewart. And it was Foyt who presented the winner’s trophy to one of Stewart’s drivers. Kevin Harvick, in Victory Lane on Sunday at Phoenix International Raceway.

In an earlier question-and-answer session with reporters, Foyt opined that the Aug. 5, 2013 Sprint Car accident that sidelined Stewart for 15 races last season would have no lasting effect on Stewart’s on-track performance.

“Once you’re a racer ... Tony isn’t going to settle for second or third. Tony will run just as hard for a dollar as he would for a million dollars. I think that’s where him and I have become friends.”

Harvick dominates in Phoenix to score the win