Penske Racing to get Allmendinger's drug screen results by Thursday

EDMONTON, Alberta – A.J. Allmendinger’s test results on his “B Sample” will be known within 24-48 hours after Tuesday’s test, according to Bud Denker, Senior Vice President of Penske Corporation. Denker is in Edmonton for Sunday’s IZOD IndyCar Series Edmonton Indy and confirmed that the second test for the suspended NASCAR Sprint Cup driver of the No. 22 Shell/Pennzoil Dodge will be known prior to next Saturday’s first practice session for the Crown Royal at the Brickyard at the Indianapolis Motor Speedway.

Allmendinger failed a random drug test issued by NASCAR prior to the Sprint Cup race at Kentucky Speedway on June 30. The results of that test were not known until later in the week and NASCAR announced it had suspended the driver just hours before the start of the Coke Zero 400 at Daytona International Speedway on July 7.

Three-time IZOD IndyCar Series champion and 2006 Indianapolis 500 winner Sam Hornish, Jr., who competed in Sprint Cup for Penske Racing from 2008-2010 and is currently a full-time competitor in the Nationwide Series, has taken over Allmendinger’s ride at Daytona and in the July 15 race at New Hampshire Motor Speedway. 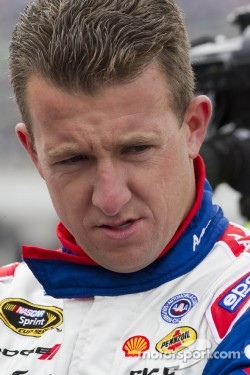 Denker, who said neither NASCAR nor Allmendinger have notified the team of what substance was found in Allmendinger’s initial test, expects to have the results of Allmendinger’s B Sample either late Wednesday or on Thursday.

Team owner Roger Penske and Team Penske President Tim Cindric have both said if Allmendinger passes the B Sample test he will immediately be reinstated to the No. 22 Dodge.

If Allmendinger’s second drug test comes back positive, then he will be suspended indefinitely by NASCAR. If that happens, Hornish could be pulling double-duty at the Indianapolis Motor Speedway. He is already scheduled to compete in the inaugural Nationwide Series Indy 250 next Saturday and could be in the No. 22 Shell/Pennzoil Dodge for Sunday’s 400-mile Sprint Cup race.

“Sam has proven to be a pretty good driver to drop into that car and we are very fortunate to have him,” Denker said. “If we have to we can use him in both series because there are only a few schedule conflicts where his Nationwide Series would interfere.”

Denker also said the team is sensitive to its sponsor, Shell/Pennzoil, which had to endure the fallout from Kurt Busch’s dismissal in December and now has to deal with the uncertainty that has surrounded Allmendinger’s initial failed drug test.

“I was in Colorado on my first day of vacation when we got the news of A.J.’s suspension and Roger (Penske) was on the final day of his vacation in Europe,” Denker said.

Truex: NASCAR Next Gen car "does everything a little bit better"