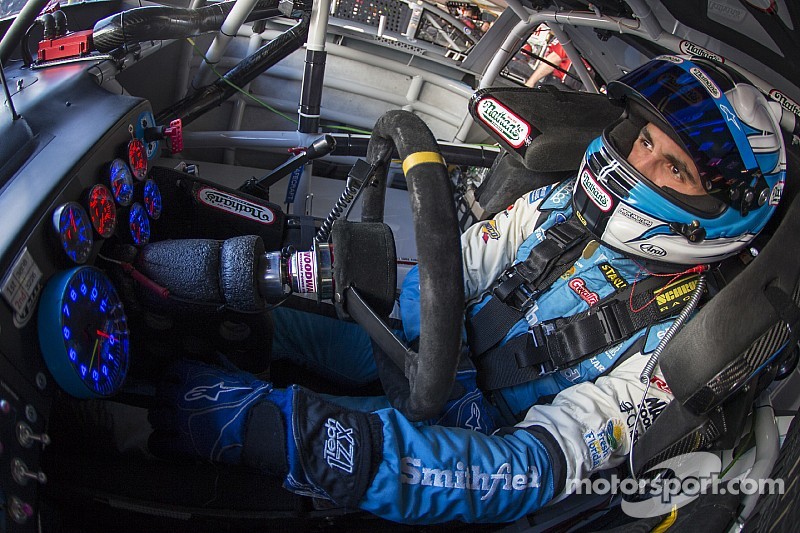 The driver of the No. 43 Richard Petty Motorsports Ford sees promise with 2016 Sprint Cup rules package

PHOENIX – Aric Almirola put in a lot of seat time over the last two days at Charlotte Motor Speedway.

The driver of the No. 43 Smithfield Ford logged laps for Goodyear on Tuesday with Kasey Kahne, Martin Truex Jr. and J.J. Yeley and then used the control tire at an open test on Wednesday.

Almirola hopes the two-day test helps him get up to speed for May.

“We’ve just been running through a lot of setup things and a lot of aero stuff and a lot of things that we kind of came up with over the winter and we’ve had a lot of questions about, whether they were gonna be better or not,” Almirola said. “It’s hard when the wind tunnel tells you one thing sometimes the race track agrees and sometimes it doesn’t, so we’ve just been kind of validating some stuff on the race track that we’ve seen in the wind tunnel.

“We’ve been kind of validating some stuff that we’ve been seeing in our new simulation software and kind of correlating that to the real world aspect at the race track.  It’s been a great test for us as far as those things are concerned.”

In the first two intermediate track races of the season, Almirola finished 11th at Atlanta Motor Speedway and 26th last weekend at Las Vegas following a pit road speeding penalty and plowing into the back of Brad Keselowski, who checked up to avoid the incident between Kahne and Carl Edwards.

At Charlotte, Almirola’s average finish is 19.5 but he won the pole for the 2012 Coca-Cola 600 and posted a career-high 11th-place finish at the track last May.

Almirola, who qualified for the Chase last year, made solid gains on 1.5-mile tracks last season, but NASCAR introduced a new rules package for this season which the team is still working to get dialed in.

He and the other drivers spent half of Tuesday's test working on modifications for 2016 Generation 6 cars. The teams will have the option to run the 2016 package in the All-Star race at Charlotte to offer NASCAR a better understanding as to how the car races in competition.

The cars didn’t have as much grip.

“From my seat the 2016 package has a smaller splitter, a smaller radiator pan, so essentially less front downforce, and then a smaller rear spoiler, essentially less rear downforce, so just total less downforce and I guess it’s pretty even according to NASCAR,” Almirola said.  “We have not had a car in the wind tunnel with the 2016 rules package yet, so this is all just purely based on the information we’ve been given from NASCAR from their technical studies.

“But it was just kind of an even total less downforce, not less front, not less rear shift, but just total less downforce and it kind of felt like that on the race track.  The cars didn’t have as much grip.  We were going about six or seven miles an hour faster at the end of the straightaway at the end of the straightaway than the 2015 package, but we were about 9-10 miles an hour slower in the middle of the corner.

“So from that aspect I liked that.  I think all the drivers are kind of wanting to go slower in the middle of the corner, not slower than our competition, but just slower in general because that helps Goodyear bring a tire that lives longer.”

Where the rubber meets the road

Almirola says the rising speeds in the center of the corner put additional loads on the tires and increases the amount of heat which has been problematic for Goodyear in the past. Almirola believes the progress NASCAR is making with the Generation 6 cars will alleviate some of the pressure on the tire manufacturer.

The 2016 package, slipped and slid around the race track a little bit more, which I was perfectly fine with, and I think it has the potential to put on a really good race.

“If we can continue down this road with our rules package and continue to get the center of the corner speeds down to where we have to let all the way off the gas and use some brake and those kind of things, I think it will open up a big window for Goodyear to be able to bring a more softer tire with more grip that wears out and it’s gonna be durable as well,” Almirola said.

“I’m excited about it.  I thought overall the car, when we went to the 2016 package, slipped and slid around the race track a little bit more, which I was perfectly fine with, and I think it has the potential to put on a really good race and I guess we’ll find out soon enough.”