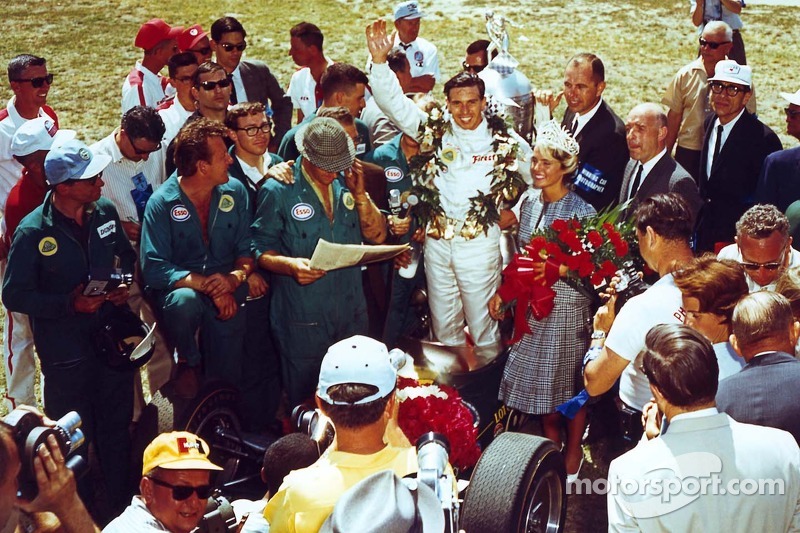 In 1965, the Wood Brothers pit crew brought a bit of NASCAR ingenuity to Indianapolis Motor Speedway

Since 1956, when Joe Weatherly and Curtis Turner recommended the Stuart, Va.-based family to the powers that be in Dearborn, Mich., the Wood Brothers have been a part of the Blue Oval family.

So, though patriarch Glen Wood was surprised when Ford’s John Cowley suggested the team crew their Lotus-Ford entry for the 1965 Indianapolis 500, he didn’t hesitate.

“We had started working on pit stops back in the 1960s,” said NASCAR Hall of Famer Leonard Wood. “We had already worked out how to streamline pit stops. So when Ford called Glen and asked if we’d like to pit Jim Clark’s car, he told them sure.”

The Wood Brothers had witnessed the Indianapolis 500 one year earlier when Ford chartered a plane in 1964 and ferried its NASCAR teams watch to the race. That’s when the “wow” factor first hit Wood.

“It was extremely impressive,” Wood said. “Movie stars and dignitaries are all over. Leading up to the race is very exciting – and it goes on all week.”

But Ford was far from satisfied with the performance in the pits the previous year. Once the Wood Brothers were enlisted, the plan started taking shape. The crew came to Indianapolis a week early to acclimate to the open-wheel car. Although Clark had already qualified the car, the team was able to watch other teams practice and worked on orchestrating their stops.

“When we went to Indy, it was to work with an English crew, a foreign crew, and we didn’t know if they were going to accept us," Leonard Wood said. "Ford wanted us up there, but we didn’t know whether the existing crew was going to accept us. When we first walked in, they were very, very, nice to us and rolled out the red carpet. We were very welcomed to be there and started preparing the car for our pit stop.”

At the time, Wood wasn't aware of the first impression his family made to members from Colin Chapman’s crew. He discovered several years ago at the Goodwood Festival in West Sussex, England that the Lotus team questioned the Virginia natives' ability to execute anything in a timely manner, given the depth of their southern drawls.

“As slow as we talked, they sure hoped we could pit the car faster than we were talking,” Wood said with a laugh.

On pit road, speed never appeared to be a problem for the seven-man crew which featured Wood Brothers – Glen, Leonard, Delano and Ray Lee – along with Kenny Martin, Jim Reed and Ralph Edwards. There was one outlet from the tank streaming into two hoses which made the fuel flow faster. Leonard was the fueler on the outside of the car, while Edwards had the hose on the inside with Glen assisting.

With their chosen strategy, the team elected not to change tires (unless there was a failure) and to focus solely on fueling the car. If there were any major mechanical adjustments to be made, Chapman’s “disaster crew” would fill in.

“We were going through inspection and the tank had a giant venturi inside that helped sucked the fuel out,” Wood said. “This was the first time they started with gravity flow. They had been putting it in under pressure years before. They figured we’d be in the pits at least a minute.

“One inspector said, ‘I’ll bet you a thousand dollars you can’t pour 20 gallons a minute out of that tank, but we were already flowing fuel very fast in stock cars so we knew the principle of the thing. We made a trial run after we got through inspection and it poured 58 gallons in 15 seconds. We knew we would be under 20 seconds.”

Wood estimates there were 350,000 fans in attendance, and the area behind their pit stall “was so packed with people you could hardly move”. Despite the throngs of spectators, Wood was never nervous. “No,” Wood said with a chuckle. “We were eating it up. It was very rewarding. But we just concentrated on the job.”

Although A.J. Foyt started from the pole, Clark led the first lap. Clark had told the crew ‘he wasn’t going to run hard’, according to Wood. While Foyt and Clark traded the point over the first two circuits, by third lap, the No. 82 Lotus extended his lead and remained out front until he pitted on Lap 66 with a 10-second lead.

“The first run was 17-18 seconds,” Wood said. “Sam Hanks, I believe was the commentator, says, ‘Well, you can bet they didn’t get it full. They’ll be back in. You can be sure of that, a green crew and all that’. “(Jim) was so on his game, he left as soon as I got cleared. Then he never did come back in.

“So Hanks said, ‘What do you think is wrong?’ The other guy said, ‘I don’t understand it. Maybe he’s running half-gasoline, half-alcohol so they don’t have to put in as much. So they ran down Chapman to see what he was running, and he said, ‘pure alcohol’.”

On Lap 137, Clark pitted for his second and final stop. At that point in the race, the Scot had already extended his lead by a two minute advantage over the field. With less fuel in the tank, it didn’t flow as quickly as the first stop but the Woods executed the service on the Lotus in 24 seconds.

“I remember when we did the last pit stop,” Wood said. “Colin Chapman jumped over the wall hugging our necks right on pit road and saying “marvelous…marvelous…Bill France Sr. was in the stands and said, ‘That’s my boys’. It was very rewarding.”

Clark’s margin of victory was 119.98 seconds. He led 190 of the 200-lap race on a day of ‘firsts’—first Indianapolis 500 win for Ford, first win for the rear engine Lotus and the first foreigner to win the Greatest Spectacle in Racing since 1916.

“Coming through gasoline alley to the winner’s circle the crowd was so huge you could hardly move inches at a time,” Wood recounts. “It was a proud win, but you can only help so much. We were just happy to win the race after we won the race. But you get excited any time you win a race. I don’t care if it’s a pine wood derby car, a go-kart or a remote control car, you get excited. But this was one of the biggest wins you can ever get.

“Whenever people ask you what are the most exciting moments in racing, you always mention the Daytona 500 in 1963 when Tiny Lund helped Marvin Panch get out of the burning car and wins the race, the six Daytona 500s and the Indy 500 with Jim Clark – all three are right there together.”

Eddie Wood was in sixth grade when his father and uncles pitted Jim Clark's Ford-powered Lotus but he remembers the day well.

“They ran that race on Monday, Memorial Day,” said Wood, who currently leads Wood Brothers Racing. “In Virginia, back then, they used to make us go to school on that day. So, I had to put a radio in my pocket and ran the wire under my shirt. I listened to the whole thing. I had a couple of guys on either side and in front of me kind of covering for me where I could listen to it while they kind of blocked my view from the teacher."