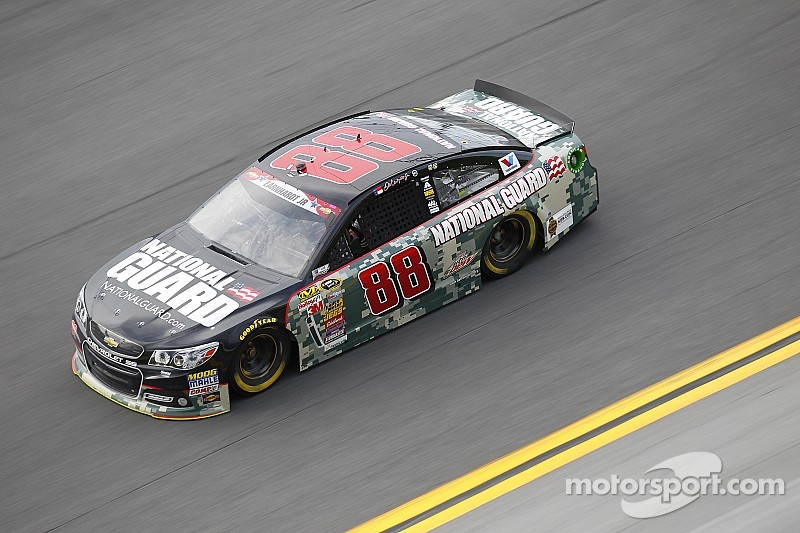 The Army National Guard is pulling their sponsorship from motorsports.

NASCAR's most popular driver, Dale Earnhardt Jr., will lose the National Guard as a sponsor with the Guard deciding to terminate their sponsorship at the conclusion of 2014. They will also cease sponsorship of IndyCar driver Graham Rahal.

In a statement released by the National Guard, they cited "Significantly constrained resources and the likelihood of further reductions in the future" as the reasoning behind the decision. It comes at a very ironic time as Dale Jr. is fresh off a victory at Pocono for the Guard.

This now leaves Bobby Rahal and Rick Hendrick scrambling to put together new sponsor deals in time for the 2015 season. Rahal and the Guard are new partners and the relationship came after a fight between Rahal's team and Panther Racing for the deal, which held them as a  sponsor since 2008.

According to the Army National Guard's release, they have spent $32 million dollars on NASCAR and $12 million on IndyCar this year, which accounts for roughly 37% of their overall advertising budget.

They went on to say that they will have a smaller budget to play with,  stating "In fiscal year 2015, the Army Guard's marketing budget is expected to be about half of what it was just three years ago in fiscal year 2012."

They also noted that "while sports sponsorships have played an important role in helping the Guard build strong brand awareness, existing Army National Guard sponsorship contracts with NASCAR and IRL are set to expire at the end of the current season."

The only problem with that statement is that Hendrick Motorsports claims that to be false. In fact, they are scheduled to be showcased on the No. 88 machine in 18 races next year and have served as his sponsor since he joined Hendrick Motorsports in 2008. See the following release from HMS.

“Our team has a contract in place to continue the National Guard program at its current level in 2015. We have not been approached by the Guard about potential changes and plan to honor our current agreement."

“We were informed this afternoon that the National Guard will end all sponsorship of motorsports, including both IndyCar and NASCAR at the conclusion of the 2014 seasons," said Bobby Rahal, co-owner of Rahal Letterman Lanigan Racing.

"This is obviously very disappointing news to Rahal Letterman Lanigan Racing given the significant incremental brand exposure we  have worked to produce for the National Guard in our first season together, including various off-track marketing and advertising programs focused on supporting the mission set forth.  We will continue to work hard to uphold the honor and integrity of the National Guard throughout the remainder of the season.  Rahal Letterman Lanigan Racing would like to thank the National Guard for allowing us the privilege of representing some of the finest men and women, those ‘citizen soldiers’ that protect our freedoms and safety each and every day… as we Focus Forward!"

Danica Patrick has high hopes for her next NASCAR road race