Look out NASCAR, Ty Dillon is ready "to explode" this season 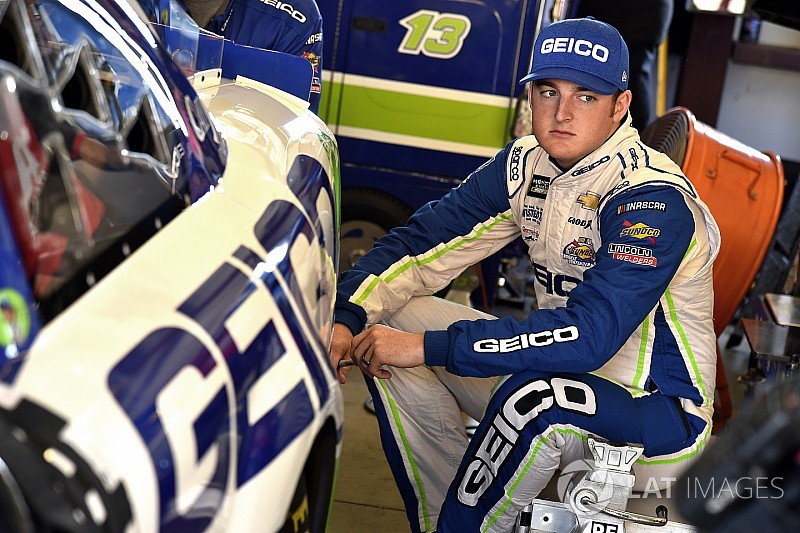 Admittedly, Ty Dillon got a little down last season.

That was then. This is now.

Dillon’s rookie season in the Monster Energy NASCAR Cup Series was full of challenges. He failed to earn a single top-10 finish with Germain Racing and ended up 24th in the series standings.

His top performances were a pair of 11th-place finishes late in the season at Talladega, Ala., and Phoenix.

But during Charlotte Motor Speedway’s Media Tour last week, there were few who could match Dillon’s enthusiasm about the 2018 season.

Nor are there many 25-year-olds in NASCAR – or any sport for that matter – who appear to be so self-aware and certain of what they want to do with their life.

“Having my little girl in the off-season helped put some things in perspective in my life and I have been trying to change my approach on some things,” Dillon explained. “I let the sport get me a little down, which sounds ridiculous in your rookie season.

“But I never really struggled in any of my previous rookie seasons, whether it was Trucks, Xfinity. I won races in my rookie season in both those series and was battling for championships all the way down to the end. Last year that wasn’t really the case.”

Dillon won seven races and the ARCA series championship in 2011. Since his move to NASCAR national series competition, he’s won three Truck races and has won win in the Xfinity Series. He finished second in the season standings in Trucks in 2013 and third in Xfinity in 2015.

Ty said he began to notice some important performance changes late last season that he believes will bode well for the upcoming year.

“I feel like I’m one of the best restarters and one of the best guys at being aggressive at the right times and the right ways in this sport – and I think if you look at some of the statistics from last year I was one of the hardest chargers every week,” he said. “We always went forward.

“I’m excited for the growth of this year, and now I feel like I’m finally getting a grasp on what it takes to have an opportunity at the top level.”

That includes understanding the opportunities Dillon has as a young driver, trying to establish his space among a talented group of newcomers and some very successful veterans in this sport.

It’s important for him to open his eyes to new and better ways to approach his on-track performance, but Dillon also believes he has an opportunity to draw the attention of fans and allow them an insight to him as a person as well as a race car driver.

“I have such a platform and I don’t think a lot of people realize what we have. I’m not the top of the top of the sport right now, but I do have 150,000 followers on Twitter and have almost 50,000 on Instagram and that’s such a great platform to start exploding off of,” he said.

“Some people have to work 10, 15, 20 years to grow a platform like that and really grind it out. And all I really have done is drive race cars, something I’m really good at, to get to that point. My focus is to expand that and, like I said, the more eyeballs I get the more opportunities I’ll get, not only to grow myself and the passions I want to try to achieve outside of racing.

“Just like everyone else, there are a lot of things I want to be good at. I want to use that as a springboard to launch myself, and who knows where this career is going to go.”

Dillon said he plans to video-blog his entire 2018 season in hopes of giving fans an insider look into his year. He said he’s hired someone who will attend 36 different events with him this season, mixing it up among races, personal activities and sponsor appearances.

“I think something that has bothered me about our sport is in the 1990s and 2000s everybody said they could relate so well to Dale Earnhardt. That’s why they loved him. He was obviously the top level of fandom in our sport,” Dillon said.

“He did such a great job of making people feel they are just like Dale Earnhardt even though he’s a race car driver. I feel like I can do that. I just have to give them a better platform, so I’m going to do that and it’s the fans’ opportunity this year to get to know me.

“Everybody is passionate about something. I want people to see what fuels me, whether it’s my family, whether it’s sports, whether it’s racing. I’m going to open up and (let them) see me for who I am and that they can relate to me, too, as a human.”

Dillon is under no illusion that he cannot please everyone. No matter what he does, there will be those on social media who will offer a negative response for something. In fact, he already experience plenty of “blowback” as he calls it.

“That doesn’t bother me; that’s not going to affect me because I’m not a person that hates. I’m also a person that doesn’t talk before they know something,” he said. “I kind of have gotten the persona of the quiet, kind of reserved person.

“I’m going to take my personality and let people see it. I’m not a flash in the pan. I plan on building a legacy and what I want to do and who I want to be.”

Kyle Busch: 2017 title loss "painful" because of how close it was

Team building pays off for Joey Logano and Penske crew