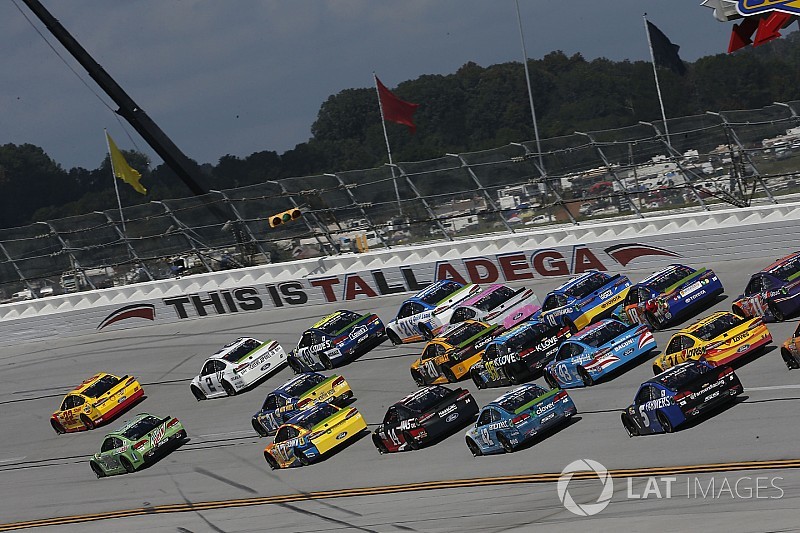 Brad Keselowski’s combined race and stage wins at Talladega Superspeedway elevated the No. 2 Team Penske Ford from 10th to second in the Monster Energy Cup standings on Sunday.

The Alabama 500 wreckfest shuffled the playoff grid with only next weekend’s race at Kansas Speedway to settle the Round of 8.

When Keselowski collected his third win of the season and his fifth win on the 2.66-mile track, only two of 12 drivers still in contention for the title — he and Denny Hamlin — were running at the end of 500-miles.

Hamlin's sixth-place run enabled him to maintain fifth in the standings.

Jamie McMurray was the biggest looser of the day. He entered the weekend eighth in the standings and was the first playoff driver in the garage after 25 laps. McMurray had attempted to pit and was punted by rookie Erik Jones. But the veteran accepted responsibility for the incident.

“It was my fault,” McMurray said. “I assumed that they said the 18 (Kyle Busch) was going to let me in, so I thought we were all going to pit. I didn’t even know where the 77 (Jones) was. When I got on the brakes, I thought we were all coming to pit road as a group. I’ll take the blame for that. I just kind of assumed we were coming to pit road right there. Obviously not everyone was.”

McMurray fell to 12th in the standings with his 37th-place finish. And with just three-playoff points for the season, he dug a 75-point deficit behind leader Martin Truex Jr. Although his home track — Kansas Speedway — has been a solid venue for McMurray, his only shot of transferring to the next round would be with a win.

“There’s nothing you can do about it,” McMurray said. “It’s part of Talladega. We know you can come out of here with a lot of points and be a winner or you can be in the position we are right now. We’ll go to Kansas and do our best. I’m sure I won’t be the only Playoff driver disappointed today.”

McMurray was prophetic. Although it took six cautions and 145 circuits, a 16-car melee collected playoff contenders Truex, Jimmie Johnson, Ricky Stenhouse Jr., Kyle Busch and Kevin Harvick. Matt Kenseth received damage in the wreck but after repairs soldiered on to finish 14th, one lap down, and actually dropped from ninth in the standings to 10th.

Truex, who had nothing to lose after winning at Charlotte the previous week, acknowledged that he was a bit overaggressive with 17 laps remaining in the race.

“I tried to get into a hole that was closing up at the wrong time and by the time that I got in the brakes trying to get out of there I got in the 38 (David Ragan) a little bit on the right rear and he got squirrely out there and all hell broke loose,” Truex said. “Just was trying to get to the end and get some track position and try to get towards the front and have a good day and ended up causing a wreck, so I hate it for everybody.

“We definitively had nothing to lose today, but at the same time you don’t want to be the person that causes others problems. Even though I feel like I’ve never been that guy here before it looks like today I was, so I hate it for all of those guys and all of their teams.”

Busch dominated the first round of the playoffs with two wins in the first three races. However,  after hitting the wall multiple times at Charlotte and finishing 29th, compounded with his 27th-place result at Talladega, Busch dropped to ninth in the standings, 53-points out of first. With 41 playoff points, Busch can recover at Kansas with a solid finish.

“I hate it for our situation and what we’ve got going on,” Busch said. “That’s not what we needed today, but that’s what we got so we’ll just move on to next week.”

Johnson and Harvick attempted to repair their cars but NASCAR. The No. 48 Hendrick Motorsports Chevy was parked for working while the red flag was displayed. Johnson finished 24th and has a seven-point advantage over Busch.

Stenhouse entered the weekend in the cellar and was in a must-win situation. He led six laps an contended all day until the wreck. McMurray’s early exit combined with Stenhouse’s 26th-place finish enable the No. 17 Roush Fenway Racing Ford to move to 11th. However, he remains 68-points behind Truex and 22-points outside of eighth-place Johnson.

Although Harvick returned to the track, five laps later he was caught in the melee between Joey Logano, Trevor Bayne and Ryan Blaney. Harvick retired in 20th and dropped to fourth in the standings. Blaney finished 18th after leading 27 laps. But picking up a stage win and finished third in the other segment, he actually moved from 11th to seventh in the standings.

Chase Elliott tumbled from fourth to sixth in the standings after wrecking with six laps remaining in the race. Elliott led three times for a total of 26 laps and was battling for the lead on Lap 183 when he turned Daniel Suarez and collected Kyle Larson. Elliott’s day ended with a 16th-place finish. He trails Truex by 33-points. Larson continued in the race but was scored one-lap down in 13th for coming to pit road for repairs. He dropped to third in the standings, 24-points behind Truex.

“We still finished 13th and maintained our points on the cutoff there,” Larson said. “It would have been a worse day. But it also could have been better… could have won. I was glad we decided to race there in the second half. There was a lot of opportunities to get caught up in crashes. It was just crazy that a lot of the playoff guys, pretty much everybody except Brad and Denny got collected in wrecks. Pretty crazy day, but a typical Talladega.

"Just need to go to Kansas and have a solid race. A top-10 run will be all we need to do probably."