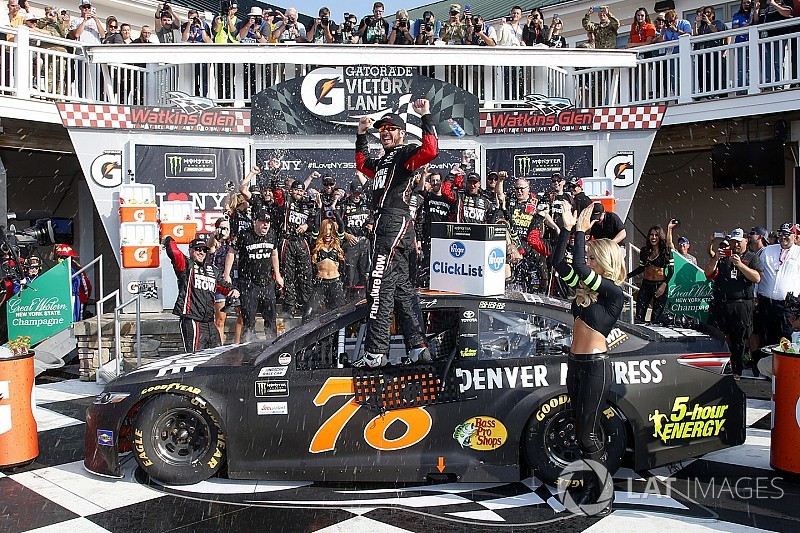 Patience paid off for Martin Truex Jr. on Sunday at Watkins Glen International.

As cars ran out of gas around the No. 78 Furniture Row Racing Toyota, Truex conserved fuel over the final 25 laps for his fourth win of the season and his first victory at the Glen.

Truex led a race-high 24 laps and took the lead from Ryan Blaney for the last time on Lap 88. His advantage was .414-seconds over Matt Kenseth coming to the finish line.

“I can’t believe that, it was so stressful,” Truex said. “I never had to let guys go for the lead. I’ve always wanted to win here, it’s a special place. This is a big one for the team.”

Truex took the lead from Suarez out of Turn 1 when the race returned to green on Lap 44. Kenseth, Blaney, Jones, Hamlin, Keselowski, Kurt Busch, Kyle Busch and Allmendinger rounded out the top 10.

Entering the outer loop, Kyle Busch made contact with Keselowski and went off the course. Keselowski dropped to 33rd, Busch to 34th. The No. 18 team brought Busch in for tires.

Kevin Harvick’s front end was destroyed when he exited his pit and was nailed by Brett Moffitt. He restarted 32nd. After completing the first lap, Danica Patrick spun off the track with an assist by Kyle Busch. She was running 16th.

Truex reeled Keselowski in on Lap 63. The No. 78 car moved to the inside of the No. 2 Ford entering Turn 7 for the lead on Lap 64. Keselowski held onto second followed by Bowyer, Blaney, Kenseth, McMurray, Suarez, Elliott, Kyle Busch and Chris Buescher.

Suarez nudged McMurray off the track on take sixth on Lap 68. Larson pitted on the same circuit. He dropped to 32nd.

Logano pitted with 15 laps remaining. Truex held a 1.5-second lead over Keselowski. Blaney passed Bowyer for third as the No. 15 Ford was saving fuel. Keselowski went wide open to the inside of Truex in the bus stop with 14 laps to go. The No. 78 also went into fuel conservation mode.

With 10 laps to decide the race, Keselowski held onto a 2.4-second lead over Truex who begged the team to let him go harder. Blaney was third followed by Bowyer, Kenseth and Suarez. Kyle Busch passed McMurray for seventh entering Turn 1. Elliott, Hamlin, Kahne, Kurt Busch, Jones, Allmendinger and Buescher rounded out the top 15.

Kyle Busch moved passed Kenseth and Bowyer on Lap 84 for fourth-place. He pitted on Lap 85 for a splash-n-go. Keselowski held the point by 5.8-seconds over Blaney, Truex, Bowyer, Kenseth, Suarez, McMurray, Hamlin, Kyle Busch and Kurt Busch rounded out the top 10.

McMurray pitted on Lap 86. Newman joined him. Keselowski gave up the lead to Blaney on Lap 87. Keselowski received a pass-thru penalty for crossing too many pit boxes on exit. Blaney pit on Lap 88 and handed over the lead to Truex.

Truex held the point coming to the white flag by 1.1-seconds over Kenseth. Suarez, Hamlin and Bowyer followed.

“I’m a little bit lost for words at the moment just because I’ve been thinking about this one (girlfriend Sherry Pollex) a long time – all weekend, all day,” Truex said.

“Then, at the end there just it’s so hard there to let guys pass you for the lead. You’ve just got to listen to your crew chief and luckily for me I’ve got the best one in the business and I just believe in him so much and I just do what he says and it seems to work out. I’ve just got to thank him (Cole Pearn, crew chief). It’s been a tough week for him and thinking about his buddies parents and family ... I guess this is our time. Just can’t say enough about all of these guys and what they allowed me to do. I’m having the time of my life, that’s all I can tell you.”

Truex extended his lead by 116-points over Kyle Busch, who finished seventh.

Click on the images to see post race coverage of Martin Truex Jr. and his win and also comments from crew chief Cole Pearn:

Kyle Busch's radio lights up after collision with Brad Keselowski