Truex on Daytona wrecks: "A lot of guys just wing it, go for broke” 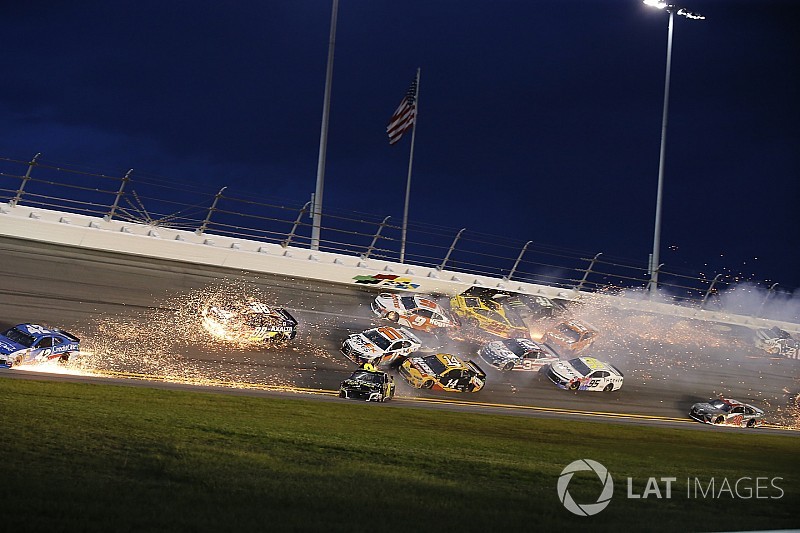 Martin Truex Jr. could see the white flag just before it turned to yellow.

Truex was about 100 yards short of taking the white flag in the first overtime of Saturday night’s Coke Zero 400 at Daytona International Speedway, which would have locked him in as the winner should a caution come out afterwards.

Instead, a multi-car wreck behind him quickly brought out the yellow, which sent the race into a second two-lap overtime.

Truex did take the white flag in the second overtime, but this time Erik Jones got around him thanks to a push from Chris Buescher and Jones went on to earn his first Monster Energy NASCAR Cup Series victory.

Truex ended up second, but considering his recent results at the July Daytona race, he seemed more than satisfied with the result.

“To finally get to the end of one of these races and then have a shot at it was cool. I wish I could have done a better job for my team because our car was really fast, and I thought it was for sure the best car we’ve had on the plate tracks probably the last two years,” Truex said.

“The good news is it’s still in one piece, so I feel good about that, but definitely congrats to Erik and his team. They've been fighting hard to get to where they’re at, and always good to see a first‑time winner.”

Jones, 22, was Truex’s teammate last year at Furniture Row Racing before moving to Joe Gibbs Racing and the No. 20 Toyota team this season.

Asked if he cut Jones any slack because of their previous relationship, Truex was adamant: “Oh, hell no. I didn’t give him anything. He earned it straight up.

“Those guys ganged up behind and came with a big run to the outside of (Kasey Kahne), and it just got a little crazy from there. Jones was just in the right spot, got the right run, timed it, got past me, and there was nothing I could do.

“The guys behind me were racing hard. I was just kind of sitting there with no momentum the last lap, and he drove on off to the sunset for the win.”

The race featured several multi-car wrecks and only 13 cars remained on the lead lap at the finish. The number of cars who avoided involvement in any of the incidents was much smaller.

Truex employed a cautious strategy throughout the race. He ventured up into the field to see how his No. 78 Toyota performed and dropped back at other times when he feared the racing was prone to produce a wreck.

“It’s a desperation kind of race. There’s a lot of guys out there that need a win, want a win, feel like it’s their best shot, and they’re willing to take big risk, big gambles,” Truex said.

“There’s a lot on the line. It’s a big deal to win at this level, at this race track, and I think a lot of guys just wing it, go for broke.”