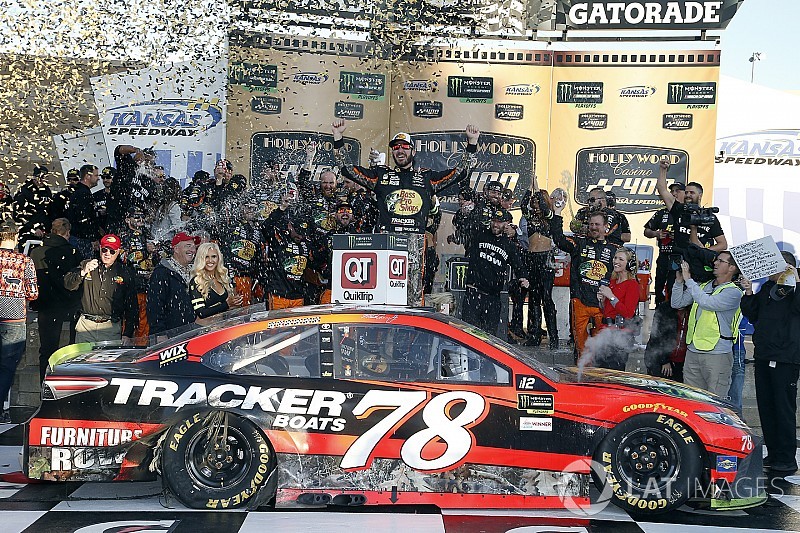 Martin Truex Jr. made it a clean sweep at Kansas Speedway on Sunday.

A loose wheel and penalty could not keep Truex from scoring his seventh Monster Energy Cup Series win of the season — including his second Kansas victory in 2017.

“Fight, fight, baby. Never give up, this one is for Jim, looking out for us here,” said Truex as he dedicated the win to Jim Watson, the Furniture Row Racing crewmen who passed away on Saturday night.

Kyle Larson, Jamie McMurray, Ricky Stenhouse Jr. and Matt Kenseth failed to transfer to the Round of 8.

Stenhouse flirted with disaster on Lap 172 when he hit the Turn 2 wall but ignited the caution two laps later when he slapped the Turn 3 wall. He was running 22nd before coming to pit road.

“We have 75 laps to go, let’s get in this thing,” crew chief Chad Knaus told Johnson.

The field restarted on Lap 192 and Johnson failed to complete a lap before spinning out of Turn 3.

Harvick controlled the Lap 198 restart but Kyle Busch took the lead coming out of Turn 2. The field hadn’t cleared the backstretch when Erik Jones lost control of his car, over-corrected and came across the nose of McMurray. Kenseth, Logano, Newman, Bowyer, Almirola, Suarez, Bayne, Elliott, Austin Dillon and Earnhardt received damage in the wreck. Kenseth

Truex moved up to second on the next lap and set his sights on Busch. Harvick dropped to third followed by Elliott and Blaney. Kurt Busch, Keselowski, Earnhardt Hamlin and Johnson completed the top 10. Truex went underneath Busch for the lead in Turn 2 on Lap 211. Busch dropped .638-seconds behind after three-quarters of a lap. Elliott moved up to third and Harvick fell to fourth, complaining of a tight condition. Blaney ran fifth followed by Kurt Busch, Keselowski, Hamlin, Earnhardt and Johnson.

Harvick pitted from sixth-place on Lap 221. Earnhardt moved up to sixth followed by Hamlin, Keselowski, Almirola and Buescher. Johnson ran 11th. Harvick dropped to 22nd, one lap down.

Pit road finally opened on Lap 239. Keselowski was busted for speeding in Section 8 and was sent to the tail of the field. He exited 12th and restarted 22nd

Bayne, who was 20th, took the wave around. Harvick and Busch cycled back to the lead lap in 20th and 21st, respectively.

"I can't say enough about all these guys on the Furniture Row/Bass Pro Toyota, I'm just really proud of them," said Truex. "Our great friend Jim Watson, losing him last night, I want to send condolences to his family. He was a heck of a guy and a great worker and helped put a lot of speed in these Furniture Row Toyotas."

"I'm excited to get this one at Kansas. It feels really awesome. It's really Furniture Row's home track. It feels really good to win here. In the spring it was heartbreak and then today it looked like it wasn't going to happen and we persevered.

"I was definitely thinking about Jim and his family. It's crazy how things all work out."