Truex on team orders: "That's not how we race" 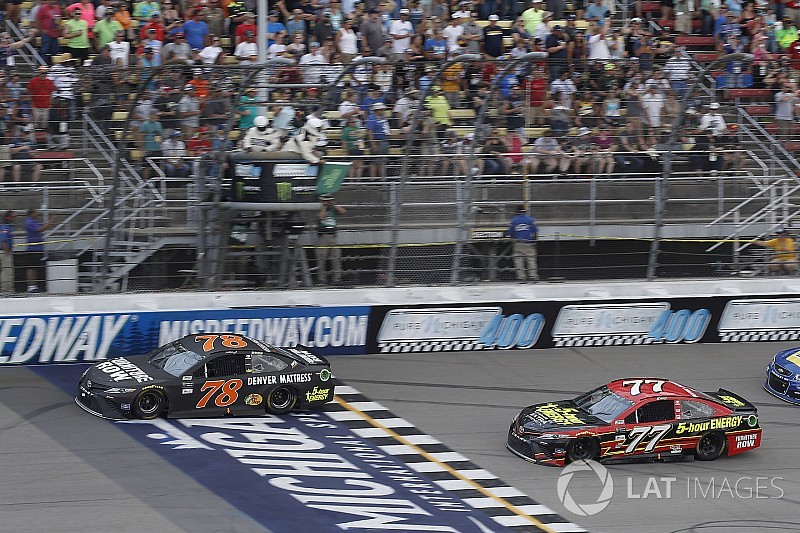 With three races before the playoffs begin, Martin Truex Jr., is sitting comfortably atop the Monster Energy Cup standings.

That can’t be said about his Furniture Row Racing teammate Erik Jones. While Jones is having a solid season for a rookie, he remains 16th in the standings — and sixth in a line of drivers without a win.

In the final quarter of Sunday’s Pure Michigan 400 — the FRR duo held the top two positions--until Kyle Larson snookered the Toyota drivers for the win in overtime.

Following the race, Truex was asked whether the strategy of team orders had been broached between the drivers. Understandably, Truex — who was also accused of sandbagging over the weekend — bristled at the implication that he might hand a race to his teammate to get Jones into the playoff.

“That's not how we race,” Truex replied firmly. “Nobody out there races that way. Nobody is going to give a Cup win up. They're too hard to get.

“We don't have team orders. Nobody lets each other win. He's going to win some races. His turn will come.”

Unlike in Formula 1, NASCAR’s 100 percent rule forbids a driver to resort to that strategy.

Last year, NASCAR Executive Vice President and Chief Racing Development Officer Steve O’Donnell said, “The spirit of that rule is really to prevent somebody from intentionally allowing another teammate to do something that would not be really within the spirit of the rules of the race.”

While Toyota had hoped to have five of its six drivers in the playoffs this year, that’s not how the manufacturer wants to secure spots in the post-season. Currently, Truex, Kyle Busch and Denny Hamlin are locked in with wins.

“Our goal in February was to take five Toyota drivers into the playoffs,” Toyota Racing boss David Wilson told motorsport.com on Sunday, prior to the race at Michigan. “We’ve got two year-one rookies (Jones and Daniel Suarez) and four veterans. The thought is you have to assume the four veterans and one of our rookies will point their way in — or hopefully, even win a race. That was kind of my thought process.

“But the reality is, today, we have three unique winners and Matt (Kenseth) on the bubble. So we’re short of our five, and right now I’m praying for four … I think we can get Matt a little more secure, and if we can go into the playoffs with four studs, I’d be pretty happy about that.”

Watch Martin Truex Jr. and Erik Jones talk about not having team orders during a race: