Truex on Charlotte Roval test: "All kinds of craziness going on" 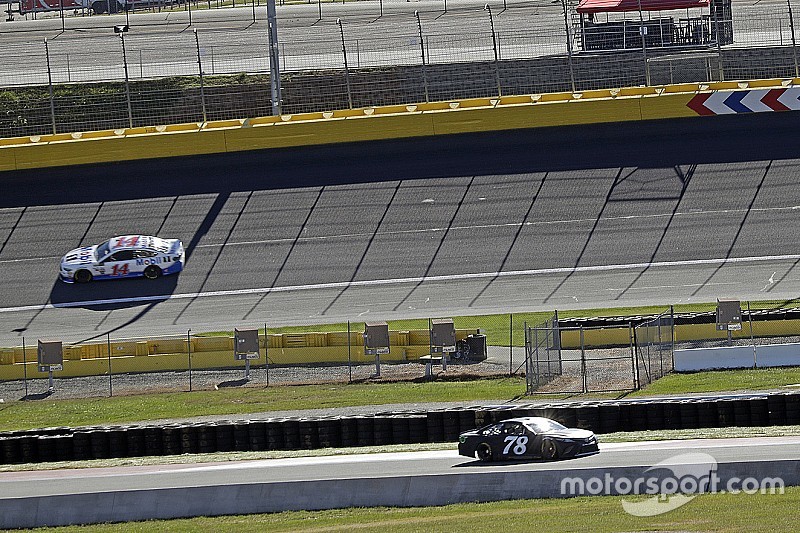 Some of the final details have yet to be worked out but one thing seemed clear from this week’s Goodyear Tire test on the new Charlotte Motor Speedway Roval – next season’s NASCAR races shouldn’t lack for drama.

“It’s interesting. It’s been growing on me a bit since we started yesterday,” current Cup series playoff leader Martin Truex Jr. said during a lunch break Wednesday. “It’s definitely an interesting track; we’re still trying to figure it all out.

“It’s not your typical road course. It’s been a unique challenge here with the banked track and the flat infield course. Those transitions have been pretty challenging and tricky. So far, we’ve been having a lot of fun out there today.”

CMS announced Wednesday next fall’s Bank of America 500 on the roval will be 500 kilometers in length, or roughly 312 miles. The race will be approximately 130 laps in length, making it the longest road course race in NASCAR.

The 2.42-mile, 18-turn course features the use of most of the 1.5-mile banked track in addition to much of the infield road course configuration, which includes a 35-foot elevation change.

“Turns 1 and 2, pretty wild, narrow, concrete walls on both sides – it’s a little intimidating. There were a lot of spots that made me a little nervous yesterday but I’m getting more used to them now.”

Truex said he had already spoken with speedway president Marcus Smith about the addition of some additional walls and tire barriers for the course.

“It’s just a unique track,” he said. “I don’t know that I’ve ever run on anything like it.”

Goodyear and the participating teams entered the test with the idea to begin with a more traditional road course setup that included a tire similar to the one currently used at Watkins Glen.

Truex and Busch said it was clear on the first day that tire may well be too hard and teams may gravitate toward a softer tire, similar to the one currently used at Sonoma (Calif.) Raceway.

“There’s a lot of things moving and shaking and we’ll continue to refine it,” Busch said. “The mindset coming here with that the roval was more similar to Watkins Glen and now that we’ve driven on it, it’s more similar to Sonoma.

Busch said while the Charlotte course is similar to the one used at 2.5-mile Daytona International Speedway during its annual 24 Hours of Daytona sports car race, the compacted space of a 1.5-mile track infield intensifies the racing.

“There is no room for taking a break, or having a deep breath down a straightaway,” he said. “Literally, as soon as you’re in high gear off Turn 4, you’re into a chicane.

“As soon as your back up through the gears in Turn 4 and get to fourth-gear and wide-open, you’re down-shifting and back on the brakes to go into the frontstretch chicane.

Furniture Row: From humble beginnings to the team to beat