Truex: "It's pretty damn awesome" to beat JGR with their own stuff 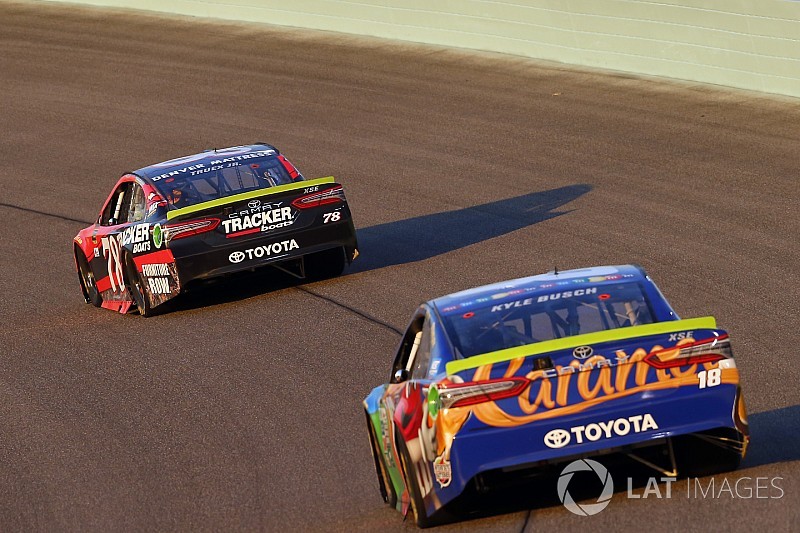 Furniture Row Racing is a fledgling organization and has already won NASCAR’s biggest prize, but not without a lot of help.

Compared to the likes of Joe Gibbs Racing, Hendrick Motorsports and Richard Childress Racing, Furniture Row is still in its infancy.

But FRR got a lot of help.

FRR has a technical alliance with JGR, which includes providing car chassis, and gets its engines from Toyota Racing Development.

In other words, Furniture Row won its championship with assistance from the very teams with which it was competing – literally.

Truex won the race – and the title – at Homestead-Miami Speedway by vending off a spirited challenge from JGR driver Kyle Busch.

“There’s no doubt about it, we couldn’t be here without Gibbs and all those guys there that are part of our program and we share information with and they build our chassis and TRD building our engines, all that,” Truex said. “We couldn’t do any of this without all of that.

“But to be able to take all their stuff and beat them with it is pretty damn awesome. Trust me, there was years where as a driver I was struggling, and you watch other guys dominate, and you’re like, ‘Man, I know I can do that.  I know I can.  Give me the damn chance.’

“That’s the coolest part of it – just showing people that you’ve got it, that you can do it.”

Technical alliances are very common throughout NASCAR these days and a big reason why smaller teams have become more competitive more quickly.

The downside to the alliance is not new.

Stewart-Haas Racing’s technical alliance with Hendrick Motorsports is what helped it become successful so quickly after Tony Stewart became a co-owner of the team.

When Kevin Harvick and crew chief Rodney Childers arrived at SHR, they immediately took full advantage of the Hendrick information and engine power.

Before moving to the Ford camp this season, Harvick’s No. 4 team won 12 races, 11 poles and led more than 5,600 laps in three seasons utilizing Hendrick assistance.

“It’s the best feeling in the world to have the same thing as somebody else and beat them with it,” Truex said. “So, thank you so all those guys that are part of our team that I feel like we’re a part of their team, as well.

“We share everything. They’re great teammates, great partners. We definitely couldn’t be here without them, but damn, it feels good to go faster than Kyle and just to beat him felt pretty damn awesome.

“He’s a champion, one of the best drivers ever. To beat him was just awesome.”

NASCAR Roundtable: Homestead reflection and a look towards the future