Kvapil Goes to Martinsville Locked In
Talladega Finish Bumped No. 38 Team Back into Top 35 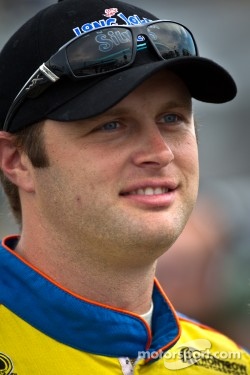 Statesville, N.C. (October 25, 2011) - The first time Travis Kvapil and the No. 38 Long John Silver's team went to Martinsville (Va.) Speedway this season, they were forced to qualify for the race on speed after slipping outside the top 35 after the first five races. It's been an almost-season-long battle to fight their way back in, but the team has overcome a 49-point deficit to climb back into the ranks that have guaranteed positions on the starting grid.

The No. 38 team enters the Tums Fast Relief 500 weekend sitting 35th in ownership points, just two points above 36th place, after Kvapil's 21st-place finish at Talladega (Ala.) Superspeedway on Sunday.

Kvapil has 11 career starts at the half-mile, paperclip-shaped oval. The track is also the scene of his first Cup race in 2004, when he announced his arrival with a fifth-place qualifying run and a 21st-place race finish. His best career finish at Martinsville is 18th (2008.)

"It feels great knowing we're going into the race weekend not having to qualify for the race on speed. Especially with Martinsville being such a 'handling' track, it will be good to be able to put a little more focus on our race set-up instead of having to put all our efforts into qualifying.

"I think a lot of people wrote us off as far as being able to get back inside the top 35. We, unfortunately, dug a pretty deep hole for ourselves and had a tough climb out of it. But we never gave up. I've got to say that for this team. The guys worked really hard every week to keep chipping away at that deficit and we finally crossed that line. Now we just have to make sure we stay there. The last four races will be critical for this No. 38 team. No mistakes.

"Martinsville is one of my favorite tracks and one that I usually run really good at. But the last couple times we just had horrible luck with breaking rear-end gears. So, that's definitely an area we can't overlook and take all the appropriate measures and get that handled. We just need to finish races. That's kind of been our Achilles' heel this season. We get caught up in something or something breaks on the racecar, and the results have been poor finishes for some of our races. So, if we just keep that stuff away from us and finish races, we'll be fine.

"Martinsville is a big track-position game. Anytime you go short-track racing, but especially at Martinsville, it's so hard to pass. If you start in the back of the pack, it seems like in 10 or 15 laps, the leader's going to be on you if they've got clean track. It doesn't take long for them to catch you. You definitely want to qualify mid-pack or toward the front. If you're in the back 10 cars, it seems like you're a lap down early and it's a cycle you can't get out of. So, if we can qualify 25th or better, our chances are much better to have a decent finish and stay closer to the lead lap or on the lead lap."

David Gilliland looks for a good run at Martinsville II