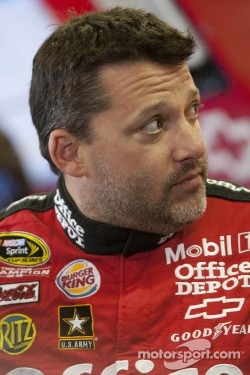 KANNAPOLIS, N.C., (Nov. 10, 2011) – Back on Aug. 24, the St. Louis Cardinals had just been swept in a three-game series by the Los Angeles Dodgers and were 10 games behind the Milwaukee Brewers for first place in the National League Central Division. In addition, the Cardinals were 10.5 games back of the Atlanta Braves for the National League Wild Card berth into Major League Baseball’s playoffs.

Following the Aug. 27 NASCAR Sprint Cup Series race at Bristol (Tenn.) Motor Speedway, Tony Stewart, driver of the No. 14 Mobil 1/Office Depot Chevrolet Impala for Stewart-Haas Racing (SHR), had just finished 27th or worse for the second time in three races. In addition, he was 10th in the point standings, winless on the season, and barely eligible for the fast-approaching Chase for the Sprint Cup.

While the Cardinals were in the midst of their magical September run to the playoffs, Stewart finished third on Sept. 4 at Atlanta Motor Speedway and then seventh one week later at Richmond (Va.) International Raceway, thus ending the “regular season” ninth in points to secure a coveted spot in the Chase.

Tony La Russa, the Cardinals manager, entered the playoffs with two World Series rings, the first coming in 1989 with the Oakland Athletics and the second coming with the Cardinals in 2006. Coincidentally, Stewart also had two championships entering his playoff run, having won Sprint Cup titles in 2002 and 2005.

The Cardinals methodically worked their way through the playoffs, defeating the Phillies 3-2 in the five-game division series before taking down the Brewers 4-2 in the best-of-seven National League Championship Series to earn a trip to the World Series.

It turned out to be one of the most exciting World Series to ever take place as the Cardinals defeated the American League’s Texas Rangers four games to three in an epic seven-game series that saw the Cardinals twice just one strike away from elimination in game six. They rallied in the sixth game, however, and won a four-hour, 33-minute classic on David Freese’s 11th-inning home run to give them a 10-9 victory.

Like the Cardinals, Stewart is making the most of his playoff run and gaining confidence each time he takes to the track. He ripped off wins in the first two Chase races at Chicagoland Speedway in Joliet, Ill., and New Hampshire Motor Speedway in Loudon and found himself first in the standings with eight races remaining.

A 25th-place result at Dover (Del.) International Speedway, followed by a 15th-place finish at Kansas Speedway in Kansas City one week later, dropped him to seventh in the standings, but not out of contention.

He rattled off top-10 finishes at Charlotte (N.C.) Motor Speedway and Talladega (Ala.) Superspeedway before scoring wins at Martinsville (Va.) Speedway and last week at Texas Motor Speedway in Fort Worth. Suddenly, Stewart is second in the standings, just three points behind (ironically) Missouri-native Carl Edwards.

And while the Cardinals were trailing 3-2 in the World Series entering games six and seven, Stewart is in the exact same position entering races nine and 10. And like the World Series, it should be an epic showdown – right down to the final lap of the season finale Nov. 20 at Homestead-Miami Speedway.

This week, Stewart, Edwards and 41 other competitors will take part in the Kobalt Tools 500k at the newly repaved and slightly reconfigured Phoenix International Raceway. With fresh pavement and the apex of the famous dogleg on the backstretch extended outward 85 feet farther than it was when the series races at Phoenix back in February, the race is truly a wild card. Despite Stewart’s long history at Phoenix in USAC, IZOD IndyCar Series and NASCAR competition – he won the Sprint Cup race at the mile oval in November 1999 – the old notes don’t work anymore.

Essentially, it’s a wild-card race and no one can predict who will be fast and successful, though Stewart was fastest of all drivers during the Oct. 4-5 open test.

With two races to go, Stewart and Co., will look to continue to its championship charge while always remembering the “Cardinal Rule:” It’s not how you get in the playoffs, but how you finish.

How careful are you in practice and in race traffic with two races to go?

“We’re not really worried about it. I’m going out to win these last two races. I’m going at it just like I do every week. There’s no reason to do anything differently. There’s nothing you do now that you didn’t do before. It’s just the end of the year and there’s more on the line, but you still do the same things that got you here.”

When you return to Phoenix, it will be a very different racetrack from the one you visited back in February – new pavement and an altered layout. What do you think of the changes?

“If it makes the racing better for everybody, then it’s a positive thing. But, I’m an old-school guy. I didn’t like it when they changed the dogleg. I hated it when they took the Goodyear bridge down – the cross-over bridge over turn four. Those were things about Phoenix that made it unique and made it special. That side has already been changed. Changes now really aren’t going to be different. It’s already lost its original look, to me, but if it makes it better and it makes it better for the fans, how can you not be excited about it?”

“The exit of turn two is a lot more open. You definitely make the apex of the corner a lot sooner, and it leads you out off the corner – it’s a lot easier to get off of turn two than it used to be. With the dogleg, it’s a little different. It’s somewhat like a roller-coaster with how it’s got an elevation change, going from the banking on the outside to down on the bottom and then back to the outside. After that, the rest of the track is pretty similar to the way it was. They did a really good job in laying the pavement down. It’s really smooth.”

You’re batting .500 in the Chase and coming into Phoenix with back-to-back wins. What kind of a message does that send to Edwards?

“We’re not counting on them to make mistakes. We’re controlling our destiny. We’re worried about what we’re doing. We’re not worried about what they’re doing. We’re just running our race and that’s what we intend to do these next two races. It’s theirs to lose, now, and we’re going to take it if we want it. Texas was a perfect example. We took five points off that deficit. We have that ability to do that these next two races.”

You’ve been in two championship runs before and won both of them. Is this one the most fun?

I didn’t think we belonged in the Chase to start with. I didn’t think we were a factor. What do we have to lose? We don’t have anything to lose. I don’t care about second or third in the points. After you’ve won it, second doesn’t really matter. To me, it’s about going out, getting that championship, doing everything you can to accomplish that goal. We’re not a group that’s going to sit here and say, ‘We’ll take the easy road and settle for second.’ I’d rather finish sixth or seventh in points knowing that we did everything we can to win. That’s what we’re going to do these last two races.”

This battle between you and Edwards is pretty impressive.

“It shows what this Chase is going to be about. It’s a good battle right now. If you’re Brian France (NASCAR CEO and Chairman) right now, I would say he’s giddy. If not, he should be because this is the perfect scenario. It’s the perfect storm, so to speak, going into these last two weeks. That’s what you want. This is about as exciting as it gets – to have two guys who are down to three points with two races to go.”

How much is the experience of having already won two championships playing into your hands now?

“It’s definitely an advantage, but I’m not going to tell you why because that’s what I’m going to take to the next two races with me. We win this thing, I’ll tell you what the advantage is and why, but not until then.”

Kurt Busch ready for the battle at Phoenix II