Why did Subway terminate its sponsorship of Daniel Suarez? 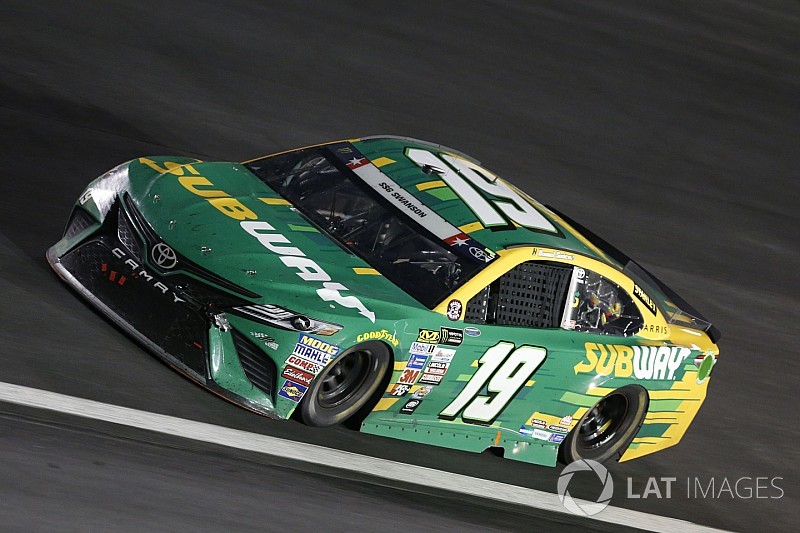 Did the “Donuts with Daniel Suarez” segment on NBC get the Joe Gibbs Racing rookie in hot water with sponsor Subway?

It’s been nearly two months since the affable Monster Energy Cup Series rookie and his trusty sidekick Rutledge Wood toured the campgrounds at New Hampshire Motor Speedway on a golf kart handing out donuts to fans.

What seemed like innocent fun for the NASCAR champion at the time — and a great way to generate fan support for Suarez — might have been the catalyst for the driver of the No. 19 Toyota losing the fourth and final Subway-sponsored race of the year.

While “Desayuno (breakfast) with Daniel” was a great hit with fans, there was one big hole in the premise. Subway has served breakfast since 2010. To have an agent of the company passing out Dunkin' Donuts could be seen as a direct conflict of interest.

Subway released the following statement to catchfence.com: "Due to circumstances beyond our control, Subway had to terminate its sponsorship of Daniel Suarez."

On Saturday, JGR confirmed that Subway ended its contract with the team after three seasons. Carl Edwards originally brought the sponsorship with him from Roush Fenway Racing in 2015.

Team owner Joe Gibbs told Motorsport.com Sunday night that Subway's decision caught the organization "completely by surprise," especially because they were in discussions about continuing their relationship next season.
"What we're going to do is try to work our way through this and hopefully we can reach an agreement here," he said.
Asked if Subway terminated the contract over the issue of Suarez giving out a competitor's product at New Hampshire, Gibbs said, "That's my understanding. That's what I've heard. It's a surprise because we only heard about it (Saturday)."

Suarez, 25, is currently 17th in the Cup standings. After winning the Xfinity title last year, he replaced Edwards, who abruptly announced he was stepping away from competition in January. Suarez started the season under the direction of crew chief Dave Rogers. When Rogers took a leave of absence in April, Scott Graves, Suarez’s NXS crew, chief took over. Suarez top finish of the season was third at Watkins Glen last month.

Bowyer's playoff hopes come down to Richmond after Darlington DNF