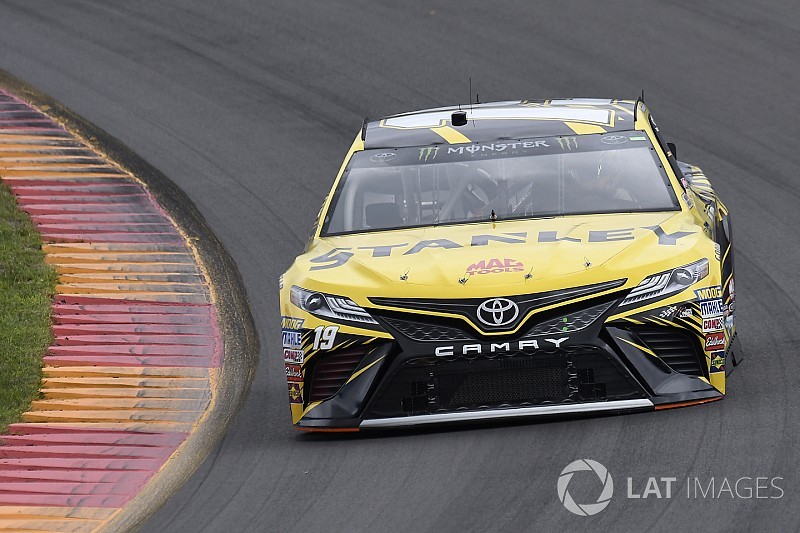 “I would love to be that guy,” he said as white smoke covered the fans in the grandstands.

At his recent pace, that should happen sooner rather than later.

Suarez nursed the fuel in his No. 19 Joe Gibbs Racing Toyota home to a career-best third-place finish in just his 22nd start in the Monster Energy NASCAR Cup Series. It was also his fourth consecutive finish of seventh or better.

“It feels very good for sure,” Suarez said after the race. “To be that close on fuel, it’s a tough feeling. I was telling my guys I want to take the fuel tank out myself to see how much fuel we have left.

“If we have half-a-gallon, I’m going to feel bad for myself because I should have pushed it a little harder. You never know, we were all running out. It would have been interesting.”

Suarez, last season’s Xfinity Series champion, now sits 15th in the series standings and it will be difficult for him to make the 16-driver playoff field on points but he believes a visit to Victory Lane is not out of the question.

“I felt very confident that we were going to have a shot (Sunday) if everything worked well, and we did. We just came a little short,” he said. “I feel like if we keep running the way that we are running right now, it can happen any time.

The progression of Suarez and his team has been even more impressive this season considering the circumstances that put them all together.

Carl Edwards’ unexpected retirement in the offseason prompted JGR to move Suarez to his No. 19 Cup team. Not long after the season began, Suarez’s crew chief, Dave Rogers, was forced to take a personal leave of absence, which left Suarez with another new crew chief in Scott Graves.

“Daniel has been here before on the Xfinity side so it was easy for him to pick it up and he had some great teammates to learn from,” Graves said. “We looked at their data and information and we were pretty close.

“We’re going to a lot of tracks for the second time now. I feel like Daniel has progressed so much from last year to this year. I feel really good about where we’re at and where we’re headed.”

Kyle Busch's radio lights up after collision with Brad Keselowski

Kenseth confident in ability to make playoffs after another strong run