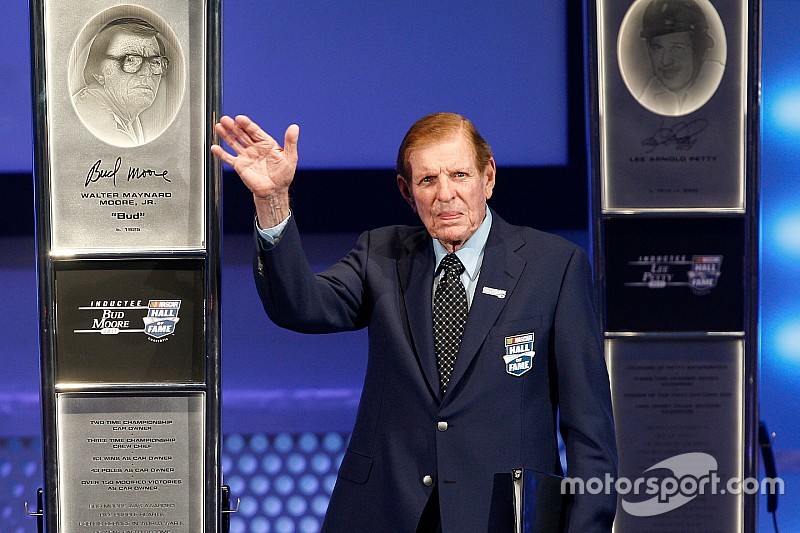 Moore was self-described country mechanic and NASCAR premier series championship car owner and crew chief and became the oldest living member of the NASCAR Hall of Fame upon induction on May 23, 2011.

“For the years that I was in racing, over 50 years, I had 43 different drivers drive for me. Bobby Allison, Dale Earnhardt and all the others, it was great to know that they went into the Hall of Fame when they did and it’s just been great to know that I got to go in at the same time they did,” Moore said in an interview discussing his HoF induction.

“It's a wonderful feeling. My family is real happy about it. All of my grandchildren and everybody have had a fit because I did go in, so it’s a great feeling.”

Moore could be said to be larger than life, both literally and figuratively. Well over six-feet tall, Moore, born in Spartanburg, S.C., in 1925, couldn’t be missed in the garage – or in Victory Lane, where his cars won during parts of four decades.

“First and foremost, on behalf of everyone at the NASCAR Hall of Fame, we offer our most sincere condolences to the entire Moore family. Walter “Bud” Moore was truly a hero in every sense of the word,” said HoF executive director Winston Kelley.

“Merriam-Webster’s dictionary describes a hero as: 'A person who is admired for great or brave acts or fine qualities.' Many may fit one of these categories but very few fit into each. Bud left an indelible mark on NASCAR. We are humbled that he considers his crowning achievement as his induction in the second class of the NASCAR Hall of Fame, one of our first 10 inductees. That alone speaks to the magnitude of his accomplishments and contributions to NASCAR as both a championship owner and crew chief.

“While we have lost one of NASCAR’s and the United States’ true pioneers and heroes, Bud’s legacy and memory will always be remembered, preserved, celebrated and cherished. Again, we offer our sincere condolences to the entire Moore family.”

Joe Weatherly collected Moore’s first full-race victory, at 0.5-mile Rambi Speedway in Myrtle Beach, S.C., in 1961. Weatherly had won a couple of qualifying points races – at Daytona and Charlotte – prior to the Myrtle Beach win.

At age 19, with the world at war, U.S. Army machine gunner Moore was front and center in the allies’ push to liberate Europe. He went ashore on D-Day, June 6, 1944, and fought through the remainder of the campaign.

He received two Bronze Stars – the first for capturing 15 German soldiers and four officers during the Battle of the Bulge. He was promoted to sergeant and wounded five times before hostilities ended in August 1945, earning five Purple Hearts.

“We had a job to do and a lot of good men died doing it,” said Moore later.

Auto racing was a destination for many returning veterans. NASCAR was born in 1948 and Moore, as a South Carolinian who enjoyed fixing cars, would return home and make the organization his life’s work.

As a mechanic, crew chief and car owner, Moore had few peers. He won his first championship, as a crew chief, in 1957 with driver Buck Baker.

Moore and Weatherly proved to be a virtually unstoppable combination. The duo won eight times in 1961. NASCAR premier series championships followed in 1962-63 as the pair won 12 races.

Weatherly died in early 1964 during a race at the old Riverside (Calif.) International Raceway, and Moore’s team would not win another title but came close with such top drivers as Billy Wade, Darel Dieringer, Allison, Buddy Baker, Earnhardt, Ricky Rudd and Morgan Shepherd.

Each managed to finish among the top 10 in the championship standings at least once – Allison was the runner-up in 1978.

When Ford wanted to challenge Chevrolet, Dodge and Plymouth in the Sports Car Club of America's Trans-Am Series, the automaker turned to Moore and Bud Moore Engineering. Moore hired Parnelli Jones and won the series' 1970 championship.

Allison, who joined his former car owner in the NASCAR Hall of Fame’s second class, won the 1978 Daytona 500, a feat not previously accomplished by Moore or Allison.

Moore’s final victory came in May 1993 at Sonoma, Calif., his Ford driven by Geoffrey Bodine. His team shut down in 1999.

In 2015, the city council of Spartanburg unanimously voted to name a street in honor of Moore. The street renamed with Moore’s name is Beaumont Avenue, where his race shop was located.

Services and arrangements will be announced at a later date.