NASCAR's season hits halfway: The best and worst of 2017 so far 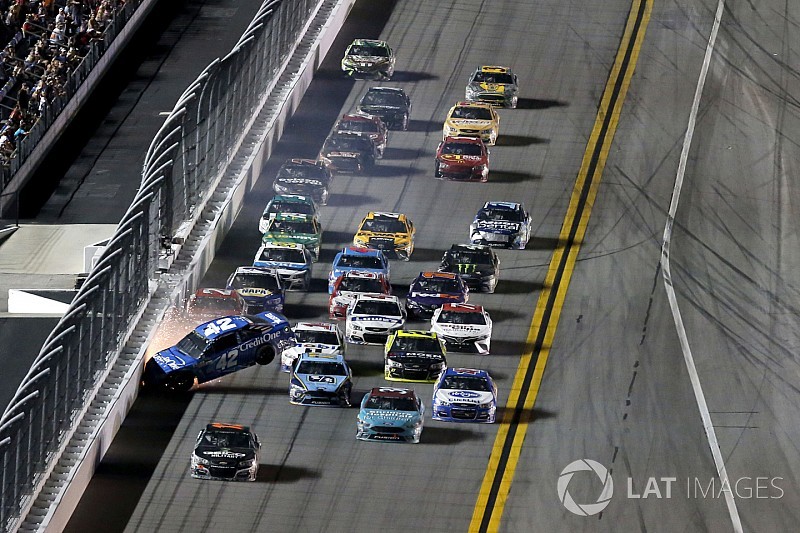 At the halfway point of the 2017 Monster Energy NASCAR Cup Series season, the positive substantially outweighs the negative, but that doesn't mean there hasn't been plenty of fodder for debate.

Whether the discussion involves stage racing, schedule changes or penalties for missing lug nuts, there has been no dearth of issues. And we’re not even to the Playoffs.

1) Emergence of first-time winners — Ryan Blaney, Austin Dillon and Ricky Stenhouse Jr., took it up a notch by breaking through to Victory Lane. Stenhouse enjoyed his celebration at Talladega so much, he repeated the feat at Daytona seven races later. What’s equally rewarding in the case of all three wins is that none of the these drivers race for a powerhouse. Sure, the Wood Brothers have an alliance with Team Penske, but Blaney has blossomed in the low-key, family atmosphere that is the No. 21 Ford. Dillon and Stenhouse are both with organizations that have down-sized to become stronger — and it has paid off for both. NASCAR striving for parity has helped many of the mid-level teams compete against the sport’s juggernauts.

2) NASCAR’s next generation — Kyle Larson has led the charge in the up-and-coming category. With two wins this season and the team’s ability to lead the standings in 12 of the first 18 races, he can hold his own against the field. Blaney has already reached Victory Lane and Chase Elliott, Erik Jones and Daniel Suarez don’t appear to be too far behind.

3) Stage racing — You’re either a fan of the stages — or you’re not. Put me in the former category. NASCAR had to do something to promote racing with drivers who were content to ride on Sundays. The segments have accomplished that goal. Any driver that isn’t up on the wheel leaves valuable stage points on the table. This will be more apparent once Martin Truex Jr. — who leads the tour with 13 stage wins — cashes in on his playoff points later this year.

4) J.J.’s quest for No. 8 — Each season the challenge of winning the championship becomes a bit more difficult. But Jimmie Johnson has never backed down from a challenge. With his 81st, 82nd and 83rd victories, Johnson, 41, has rose to sixth on the All-time win list knocking off one Hall-of-Famer after the next. But the ultimate goal — the stand-alone eight title — would but the champion in a league of his own.

5) Silly Season — The rumor mill is churning — and it’s just getting started. Matt Kenseth set Silly Season in motion last Friday at Kentucky Speedway with the announcement he would not return to Joe Gibbs Racing next season. JGR answered with Tuesday’s news that Erik Jones would fill the No. 20 ride in 2018. We still don’t know who Jones’ sponsor will be for next year. In addition to Kenseth, who are the other drivers in the mix? Fellow champion Kurt Busch, Kasey Kahne, Paul Menard and Aric Almirola. Drivers without full-time rides as of now include Bubba Wallace (who had a solid four-race audition) and Alex Bowman. Will GMS make the move to Cup and recruit one or two of these drivers? Will part of Dale Earnhardt Jr.’s retirement plan include expanding to Cup as well? Stay tuned.

1) JGR is MIA — In 2017, Joe Gibbs Racing is 0-18. The only driver making noise in the Toyota camp is Martin Truex Jr., who scored third win of the season in dominating fashion on Saturday night at Kentucky Speedway. His fellow Toyotas — and the rest of the field — had nothing for the No. 78 Furniture Row Racing team, which receives chassis from JGR and engines from Toyota Racing Development. When the No. 18 team asked Kyle Busch what he needed in the race, he described the his ride as the second-place car and replied, “I don’t know. It’s the same stuff every week.”  Busch continues to be the alpha driver at JGR. Last year, the No. 18 team scored four wins in the first 20 races but in 2017, he’s been bit by infractions — including the loss of his crew chief Adam Stevens and even his backup crew chief Ben Beshore — for lug nut violations. Busch has plenty of points to qualify for the Playoffs. The team will have to clean up its imperfections to beat Truex down the stretch.

2) The ever shrinking sponsor pool — When the top teams in the sport can’t attract sponsorship, the model needs fixing. Sure, the season started with the promising news that Shell-Pennzoil and Fed Ex had extended its partnerships with Team Penske and JGR, respectively. But the new sponsors are becoming less frequent. The continuity of identifying a driver with a sole sponsor continues to dwindle. More often there are a variety of liveries appearing on cars every week, where a score card is necessary to keep up with the changes. And let us not forget the team owners sponsoring their own cars. The math doesn’t work. With more organization downsizing, it’s scary to think that certain organizations are a sponsor away from losing a team or even shutting the doors.

3) Speaking of downsizing — Richard Childress Racing is preparing for the possible departure of Menard’s at the end of the season. At least a dozen employees were laid off in the last week coming on the heels of the departure of RCR veteran crew chiefs Slugger Labbe and Gil Martin. Sources with knowledge of the situation say certain departments were over-staffed. Marty Houston is now the shop foreman for the Xfinity Series shop, which is still looking for its first win of the season.

4) Over-officiating the sport — NASCAR deserves kudos for establishing the greatest parity the sport has ever seen. On the backside, the inspection process has become so severe that more attention has been placed on getting to the grid than on the action on the track. There has to be a happy medium. Let’s hope the teams and sanctioning body can find middle ground.