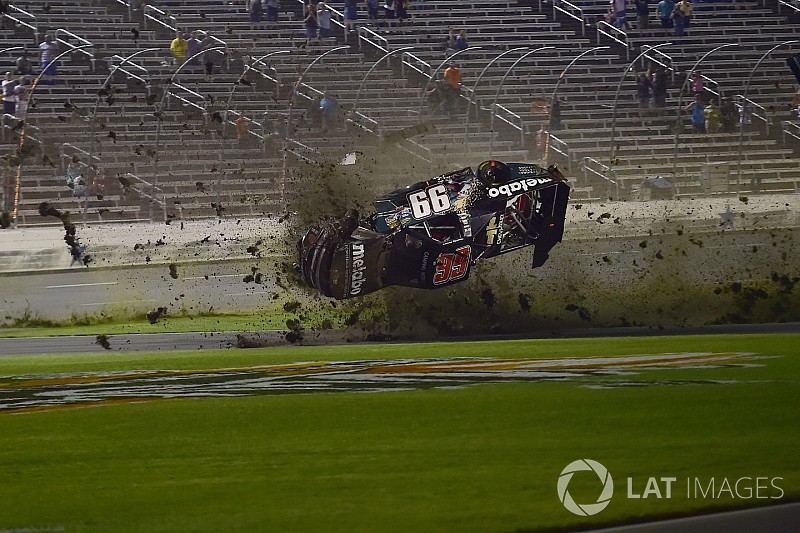 Usually, drivers walk away -- thanks to the ongoing advancements in safety.

At Kansas Speedway in May, Aric Almirola wasn’t so lucky.

The No. 43 Smithfield Ford Fusion might as well have been on ice once Almirola hit an oil slick on the track and slammed into Joey Logano’s damaged car. The initial impact of the wreck sent the rear of Almirola's car airborne — he believes at least six feet off the ground before the car slammed down on the left-side jack post.

The experience has given Almirola a new appreciation for NASCAR’s R&D Center and the role the sanctioning body plays in the safety arena.

“Every year in February to Daytona and we sit through the NASCAR safety meetings, and I’ll be the first to tell you that we take all of the proper safety precautions very seriously at Richard Petty Motorsports,” Almirola said. “All of our seats and seat belts and everything inside the driver compartment is by their recommendation…But, I sit in that meeting and you kind of just, ‘Alright, come on. We heard the same thing last year. Let’s go.’ But I can tell you that it is very serious, and I think me and Dale (Earnhardt) Jr. and others that have been in serious accidents can learn from the fact that we have those meetings and they’re for a reason and they’re there for our benefit.

“Those people aren’t wasting hot air up there, so it’s important to listen to them and we make sure that we do everything we possibly can to make our race cars safe, and I think NASCAR has done an amazing job at making our race cars tremendously safer over the years. If you look at the impact, and I’ve reviewed some of the data with NASCAR, if you look at the impact and you look at the g-load that I went through during that wreck, I’m pretty lucky to just have a compression fracture to my T5 vertebra. So I think everything that NASCAR is doing and will continue to do to make the cars safer is really great.”

The man at the helm

At the center of safety development is John Patalak, Senior Director of Safety Engineering at the NASCAR Research and Development Center in Concord, N.C. Any time there’s an accident on the race track, Patalak oversees the investigation of the wrecks — including Almirola’s, which is ongoing.

One of the things I really enjoy about my job is the freedom to really look at where we see opportunities for improvement.

Patalak joined the sanctioning body in 2005. After graduating from Penn State with a Bachelor of Science degree in mechanical engineering, he started his career a consultant concentrating vehicle crashworthiness and occupant protection — two areas Patalak continues to specialize in today.

The 39-year-old Doylestown, Pennsylvania native has always been a racing enthusiast. His first at-track experience was at Nazareth Speedway — but his interest picked up when he joined a fantasy racing league.

“I was doing NASCAR Fantasy League with friends and saw a job opening,” Patalak told motorsport.com. “It was pretty much the job description I was doing on a day-to-day basis — safety testing, crash testing, sled testing, working with crash test dummies, trying to make things better. I came down here and have enjoyed it since then.”

Patalak was originally hired by NASCAR safety pioneer Steve Peterson, who started in the sport as a crew chief and rose to the sport’s technical director before he passed away in 2008. Patalak was a disciple of Tom Gideon, who formerly served as General Motors Racing Safety Manager before becoming NASCAR’s Senior Director of Safety in 2009.

“It’s a small community so it was great to come in and learn from those guys as well as (Dr.) John Melvin (Technical Consultant to NASCAR for Racecar Safety) and other consultants that we use who really spent their whole careers on motorsports safety,” Patalak said.

At anytime, Patalak’s plate contains long-term, ongoing research projects to improve or repair a system that can last one year to three. Then there are the immediate concerns, such as minor wrecks that have occurred over the weekend at the track.

“One of the things I really enjoy about my job is the freedom to really look at where we see opportunities for improvement,” Patalak said.“They give us the freedom and they encourage that for those areas where we can be proactive. Like the laminate windshield. It was something that we noticed on the track. Tom and I looked at that and saw a way to make them stronger.

“But it wasn’t really something we were responding to on the race track that we had to fix right away. It was a project that took about a year to put in place and work with manufacturers to get a product that the drivers could — optically — still see through with no waves or anything like that but could still pass the testing we needed it to pass and ultimately implement. That was a longer-term project where we could be proactive.”

If accidents need a rapid response, Patalak doesn't have the luxury of waiting until Monday to break down the wreck. He relies on former NASCAR Xfinity Series champion and current managing supervisor of safety inspection David Green to do the instant analysis on site.

“We get as much information as we can from the race track,” Patalak said. “We have processes in place that generate information for us that’s sent to our mobile devises. So for those of us that don't travel on a weekly basis, we still have access to that information almost live. Then we can respond to those.”

Patalak’s team spends Tuesday debriefing the weekend's events. Any issues that are encountered over the weekend they look to streamline and attack more efficiently in the future. The team tackles more pressing issues and adds less timely matters to the to-do list.

Still, there are no typical weeks for Patalak. Although 90-percent of his duties surround safety, new challenges always arise. He appreciates the unpredictability of his job and the continual search for protecting the sport’s most valuable resource — the drivers.

“There’s very little low-hanging fruit left,” Patalak said. “I want to be careful not to disparage previous improvements. They were necessary. And it’s easy to look backwards and say, ‘That was easy to fix.’ But it wasn’t at the time. They were hard issues. If they were obvious, people would have done them 50-years ago, not 15-years ago. But as we continually look for improvements — the cars continue go faster — so we’re always looking for the next thing to make the drivers safer, and those are harder to come by than they used to be. We get excited about five and 10-percent improvements but 10-years ago, it wasn’t uncommon to see a 25 or 40-percent improvement or reductions in forces, accelerations or loads.

“That’s one of the challenges now that each improvement requires a lot more testing to be confident that it is improvement. That you’re not doing harm in another area. Like, for exam ple, if we find that moving a seatbelt anchorage point reduces chest displacement. So that’s a good thing. But have we increased head acceleration or femur loads? So every small improvement we make we have to run through the whole scenario of what the driver could be exposed to, to make sure we’re not causing a detriment somewhere else. Where when you have a big, 50-percent improvement, typically, you’re making improvements all over the place. They may be smaller improvements but they’re still in the right direction.”

Note: Speaking of improvements, Patalak is continuing his education as a graduate student concentrating in biomechanics at the Virginia Tech - Wake Forest University School of Biomedical Engineering and Sciences.