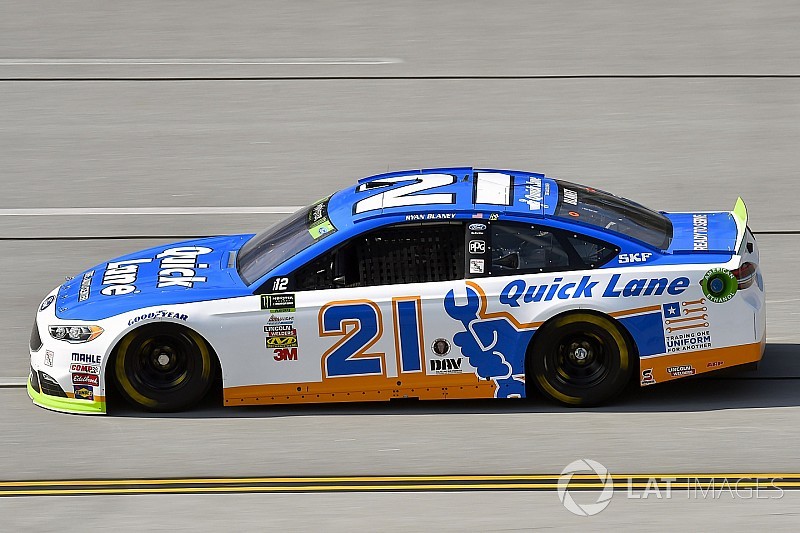 Ryan Blaney picked up his fourth stage win of 2017 on Sunday at Talladega Superspeedway.

“That was a lot of fun being able to control both lanes,” Blaney said. “That’s something we’ve been working on the last two years with Josh (Williams), my spotter. We were trying to pick the right lane at the right time and hope that people go with us.”

Kenseth crossed over from the outside lane to take the lead in Turn 2 on Lap 63. The field went four-wide on Lap 64 with Kenseth at the point followed by his teammate Suarez, Kahne, Harvick, Kyle Busch, Hamlin, Cassill, Ragan, Johnson and Elliott. Hamlin took the lead on Lap 64.

Green flag pit stops began on Lap 67 with Hamlin, Larson, Keselowski, Logano, Bayne, Bowyer, Harvick, McDowell, Austin Dillon and Johnson, who received damage after contact with Ty Dillon. The next wave of pit stops occurred on the next circuit with Kyle Busch, Kenseth, Suarez, Elliott, Earnhardt, Truex, Ty Dillon and Cassill pitting. Kahne led a lap before coming in for service on the next circuit. Brendan Gaughan led a lap before pitting on Lap 71. DiBenedetto took the point on Lap 71.

Hamlin pitted with a loose wheel on Lap 80. He was running 16th at the time.

NASCAR called a caution for debris on the backstretch with DiBenedetto, who had not pitted, still in the lead followed by Stenhouse, who was 16.871-seconds behind. Kurt Busch, Logano, Ty Dillon, Keselowski, Kyle Busch, Blaney, Kesenth, Bowyer, Truex, Harvick, Elliott, Bayne, Johnson, Larson, Suarez, Austin Dillon, McDowell and Earnhardt rounded out the top 20. Hamlin dropped to 32nd.

DiBenedetto pitted on Lap 84 during the fourth caution along with Harvick, Bayne, Larson, Earnhardt, Menard, Newman, Austin Dillon, Patrick, Kahne, Almirola and Johnson, who had extended service to repair earlier damage to the right rear of his car. He dropped to 33rd, but pitted again before the restart.

After the first lap, Stenhouse held the lead, but Busch passed him for the point on the restart. Blaney fell into second followed by Truex, Bowyer and McDowell. Stenhouse dropped to sixth followed by Kenseth, Elliott, Ty Dillon and Team Penske Fords of Logano and Keselowski.

On Lap 99, Blaney led a seven-car break-away with Elliott, Bowyer, Kurt Busch, Truex, Stenhouse and Keselowski and Logano. Earnhardt worked his way back to 10th.

Blaney held the lead with 10 laps remaining in the stage. Elliott attempted to block Keselowski, but the No. 2 Ford made the pass for second coming to Lap 102. Elliott dropped to third followed by Stenhouse and Bowyer. Elliott worked the outside lane coming to Lap 105 and regained second. Keselowski, Bowyer, Stenhouse, Kurt Busch, Truex, Johnson and Logano rounded out the top 10 with five laps to decide the stage.

Johnson moved up into the top five on the next circuit. Harvick moved to 10th with two laps remaining.