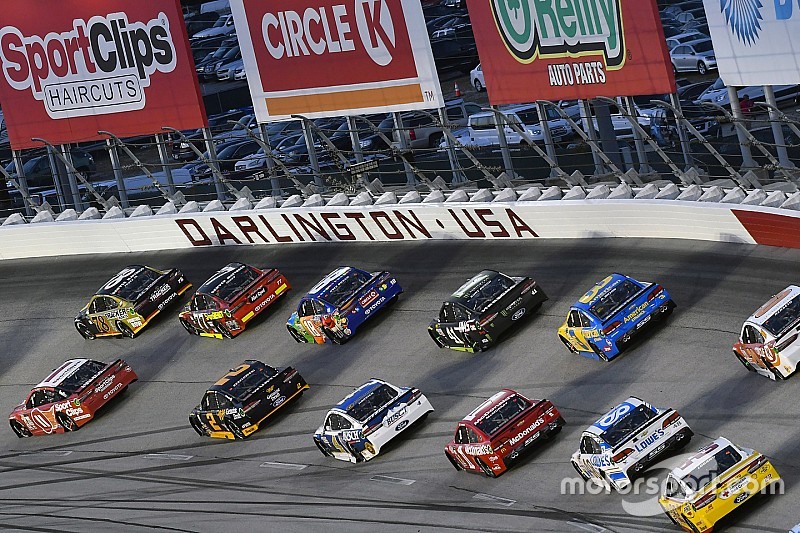 From the chaos in Canada to Throwback weekend at Darlington, our team tackles it all on this week's edition of the NASCAR Roundtable.

1) The NASCAR Throwback Weekend coming up at Darlington Raceway has proven to be one of the best marketing ideas in NASCAR over the past decade. If you were the Marketing Director for NASCAR, what idea do you feel is worth trying in the sport next?

Jim Utter: One idea I think that could be embraced among all tracks is something Charlotte Motor Speedway has had success at to encourage fans to buy tickets early. If you buy tickets to a NASCAR event by a certain date, give those fans the chance to come to the track one day (perhaps leading up to the actual event) and give them the opportunity to drive their personal vehicle around the track for several laps. Maybe try to get a driver to lead them around the track. One of the toughest things right now is to get fans to more connected to the event and its participants, which in turn encourages them to want to attend in person, not just watch on TV.

Kenny Bruce: Moving the site of the annual All-Star Race. Charlotte has done a tremendous job with the event through the years but it has become stale and I don’t think continually revising the format is the answer. I think taking the race to regions/tracks that perhaps don’t have Cup races is definitely worth exploring.

Nick DeGroot: On the same vein of throwback weekend, how about a true throwback race. Yes, I mean a dirt race. Just for the novelty of it, I'd love to see a single Cup race on a dirt track as a way to pay homage to the sport's roots and also to put on a unique show unlike any other event on the schedule.

Tim Southers: Although I love Charlotte Motor Speedway and have many good friends and colleagues that work there, I think the next big move would be to look at moving the All-Star race. I think the schedule needs to be dropped to around 30 races and having the special event rotating would give tracks that host one event a chance to at least get a second event on a rotation. I also think changing up the venue might bring some excitement back to the event.

2) Justin Allgaier is enjoying his best season to date in NASCAR after picking up his fourth win of the year last weekend at Road America. Do you feel he's now the favorite to win the NASCAR Xfinity Series championship?

Jim: I'm not sure I would rule out Christopher Bell as the favorite just yet but Allgaier certainly is showing incredible consistency and speed this season and shows no sign of slowing down. I think it's pretty safe to say this year's Xfinity title could down to a showdown between Allgaier and Bell and that would likely be a very entertaining one to witness.

Kenny: While his recent run has been impressive, and the momentum will be a bonus for the team as it gears up for the playoffs, I still think Christopher Bell holds the upper hand. If Bell rates No. 1, Allgaier is 1a. But given the tracks that make up the playoffs, I tend to lean toward Bell and his Joe Gibbs Racing group as the championship favorite.

Nick: I'm surprised because Christopher Bell seemed to be the favorite going into this year, but yes, I'd dare say Justin Allgaier is the driver to beat for the 2018 championship.

3) Once again, the final lap at Canadian Tire Motorsport Park produced an exciting finish with sparks flying in the last corner. Do you feel this track has a reputation where you have to wreck a driver to win.

Jim: I'm not sure that's the reputation that's developed but it's certainly a good indicator of the results. The common denominator for me is that the race typically produces a late caution, which in turn prevents the race leader from building any sort of significant lead. If they did, the last turn antics would be irrelevant since the leader would be too far ahead for any last-lap, last-corner moves to be effective.

Kenny: It’s become obvious that if the leader isn’t clear of everyone else as the race is wrapping up, there is a good chance fans will see contact. There isn’t one specific reason for that. It’s partly a result of young drivers with limited road course experience and partly the result of typical close-quarters road course competition. Add in the fact that this year’s race was the opening Playoff race and such contact is almost inevitable.

Nick: It's just the nature of that corner. However, this situation was avoidable. If Gilliland gave Gragson the space, they both make the corner, but I also can't blame him for squeezing Gragson with it being the final lap. That run down the backstretch and those final set of corners are just the perfect storm for these wild finishes that never cease to amaze. But yes, there is a precedent now where if contact is made, it's somewhat expected and even accepted to a point.

Tim: I think it’s a product of a combination of hungry, young drivers and the layout of the course that leads to this after a late caution. I honestly think Gragson felt he had a hole to dive into and thinking that Gilliland would have stayed wide but we all saw what happened. Was it a ‘dirty move’? I don’t think so, but it was very aggressive. I think the track has just provided situations that has led to dramatic finishes and I don’t see it ending anytime soon.

4) Only two races remain in the NASCAR Cup Series regular season. Who do you think can win this weekend at Darlington that must win in order to make the playoffs?

Jim: In my opinion, I don't see any of the "must win" drivers suddenly developing the race-winning speed which would allow them to compete with the likes of Kevin Harvick, Kyle Busch or Martin Truex Jr., which anyone would probably need to do in order to earn a win at either Darlington or Indianapolis. If I had to pick someone, it might be Daniel Suarez, whose performance has picked up over the last month and had an impressive run at Pocono.

Kenny: The majority of those on the outside have either limited experience (Daniel Suarez, William Byron) or simply aren’t good on the difficult 1.336-mile layout. For those reasons, I would lean toward Ryan Newman or Jamie McMurray – experienced drivers with multiple top-10 finishes at Darlington. McMurray once won the pole and finished second (to Denny Hamlin). Man, that must seem like ages ago to the Chip Ganassi Racing driver.

Nick: Daniel Suarez would be my pick, but I agree with Jim in that I doubt it's going to happen. The Big 3 will dominate and if they are challenged, it's going to come from drivers already in comfortable positions such as Kyle Larson, Clint Bowyer or Denny Hamlin.

Tim: I would have to go with Daniel Suarez or Ryan Newman and lean towards Newman just because he has so much more experience there than Suarez does. I know Denny Hamlin won there last year, but he just doesn’t seem to have racing-winning speed this season. With that being said, watch Hamlin win this weekend.