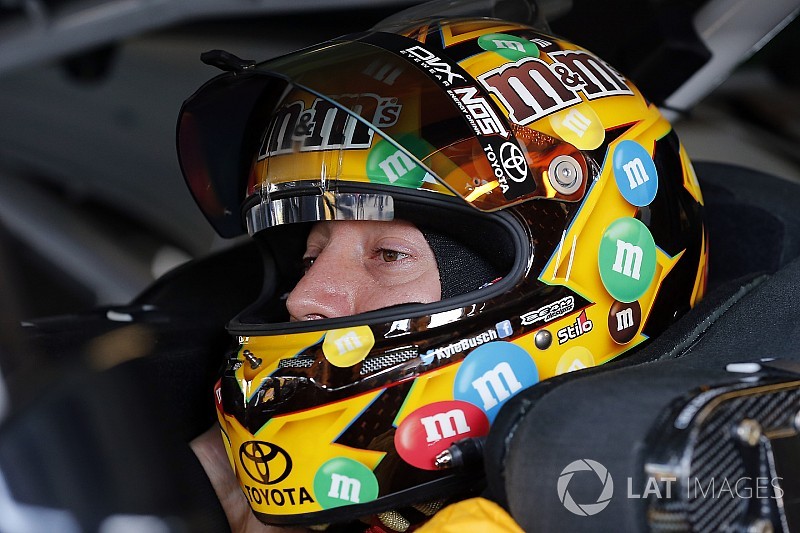 There's plenty to discuss in this week's edition of the NASCAR Roundtable.

How impressed were you with the effort Kyle Busch had to rebound from his early spin at Bristol and do you think he's the most talented driver in the NASCAR Cup Series for this generation?

Jim Utter: Anyone with any sanity could ever question Kyle Busch's talent and time and again he continues to show why is already one of the sport's all-time greats. Busch' ability to win across all three NASCAR national series is unrivaled and it's unlikely to ever be matched. In that respect he could be considered the most talented but it's hard to dismiss Jimmie Johnson winning a record-tying seven Cup series championships and doing it in a span of 11 years. Regardless, we are going to have many more years of Busch doing remarkable things while we are likely watching Johnson's career wind down. Soon, Busch will have the limelight all to himself.

Kenny Bruce: To rally from two laps down and run third with a damaged car at Bristol was incredibly impressive. But I guess we shouldn’t be surprised. Busch is one of the most talented drivers today but I’d have a hard time calling him, or anyone for that matter, the most talented. Better than Kevin Harvick? Better than seven-time champ Jimmie Johnson? As talented for sure, but better?

Nick DeGroot: The comeback at Bristol was mightily impressive and there's no questioning Kyle Busch's ability, but we must also remember that such rear-end damage with the loss of the bumper cover (sans the damage that hindered fueling) could prove to be beneficial, as we saw with Mark Martin several years ago at Martinsville. But talent-wise, Busch is without a doubt one of the best. He's an absolute wheelman and I'd name him, Kyle Larson, Kevin Harvick, Martin Truex Jr. and Jimmie Johnson as the most talented active drivers.

Tim Southers: I remember reading an interview with NASCAR Hall of Famer Junior Johnson from several years back when he was asked if he started a race team today who would he want to drive his car and he said ‘Kyle Busch’ immediately. To me that says it all. I don’t think he’s the most talented as I feel that comes from a combination of factors, but is he among the top two or three of this generation, absolutely. His performance at Bristol last week proves that coming back like he did during the race.

With the off week coming up for the Cup Series, which team do you feel could use this opportunity to reset and make one final charge to the playoffs?

Jim: I'm not sure one week is going to make much of a difference one way or the other, but Hendrick Motorsports could use a strong final two races of the regular season to help cement their playoff positions but also to get a further uptick in performance that will prevent any of them from being among the first to be eliminated. Even now, Chase Elliott appears to be most consistent of the four Hendrick teams.

Kenny: Wood Brothers Racing, with Paul Menard for one. The team has been fast but hasn’t put together a complete race very often this season. Menard has one top-five and four top-10 finishes and is 20th in points. After 24 races last year, driver Ryan Blaney and WBR had three top-five and nine top 10s, as well as a win. He was 12th in points. Second choice would be Daniel Suarez and the No. 19 Joe Gibbs Racing group, a team that’s begun to make some noise of late and needs a win to nab a playoff spot.

Nick: Everybody needs this, to be honest. It allows these teams that seem set to complete in the playoffs to gather their thoughts while those on the outside formulate their final gambit in an attempt to make the 16-driver field.

Tim: I don’t know if one week off could make that big of a difference but maybe a week off will give some drivers a chance to recharge their batteries. One thing is certain, the next couple of races should be very entertaining with several drivers deseprate for a win to make the playoffs.

There was big news last week with Elliott Sadler and Kasey Kahne both announcing this as their final season of full-time competition. Who do you feel will be the next to possibly to call it a day?

Jim: There appears to be a lot of talk, including from his team owner Gene Haas, that regardless of where Kurt Busch competes next season, it may be his last as a full-time competitor in the Cup series. That, I assume, would be his decision then. If Jamie McMurray loses his ride at Chip Ganassi Racing and can't find a competitive replacement, I could see him stepping away from his long NASCAR career.

Kenny: That’s easy. Morgan Shepherd! The four-time Cup Series winner and Xfinity Series stalwart turns 77 in October. Then again, he’s lasted this long. Aside from Morgan, Jamie McMurray is 42, winless since 2013 and possibly on the hot seat. If he isn’t retained at Chip Ganassi Racing, could he land a competitive ride? Would he want to start over?

Nick: I'd say Jamie McMurray as the next notable name to exit, especially if he loses his place at Chip Ganassi Racing. He's now 42 years old and hasn't won a race since 2013, but can still look back on his career with pride. He may have only won a handful of races, but among them were the 2010 Daytona 500 and Brickyard 400, as well as the 2014 All-Star Race.

Tim: I agree with my counterparts that if Jamie McMurray is out at Chip Ganassi Racing after this season and doesn’t land a strong ride he could step away. I also think we could see a driver like Kevin Harvick surprise us all and step away to jump into broadcasting sooner than we all might have realized. I could see him taking Darrell Waltrip’s place today on Fox.

Bill Elliott returns to NASCAR for a one-off race this weekend at Road America in the NASCAR Xfinity Series, driving for GMS Racing. Name one veteran driver you would enjoy seeing 'return' for one race and where would you like them to run?

Jim: Personally, I'd like to see Ricky Rudd come back "one night only" for a return trip to Martinsville (Va.) Speedway. Rudd had a very productive career but I'll always remember the race he won at Martinsville in September 1998. It was a brutally hot day and the cooling system in his car failed, yet he still managed to lead 198 laps, including the final 96, on the way to a victory. Afterwards, he had to do his winner's interview on his back as he received oxygen and IV fluids. He suffered burns on his back and butt. That was true grit.

Nick: Bobby Labonte, preferably in a JGR car. They had a bit of reunion in 2016 Daytona Xfinity race, but after qualifying third, he was taken out in an early wreck. I'd like to see Labonte have one more true shot with the team he enjoyed all of his 21 career Cup wins with. And he's been staying sharp competing on the NASCAR Euro circuit this year.

Tim: My dream would be to see a driver no longer with us in Davey Allison, but for those still with us, I think watching Ricky Rudd - who still looks like he could compete and win today - would be fun to watch. Like Jim Utter said, Rudd at Martinsville or even Richmond would be a show for sure.

Who might NASCAR turn to for its next leader?

Andy Lally: Charlotte Roval will be "insane" but fans will "love that"