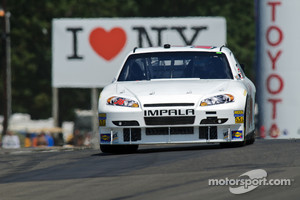 Ron Fellows will take on the twists and turns at Watkins Glen International this weekend in the No. 36 Golden Corral Chevrolet. He will join the Tommy Baldwin Racing (TBR) team in his first NASCAR Sprint Cup Series (NSCS) start this season.

TBR AT WATKINS GLEN INTERNATIONAL – This weekend will mark TBR’s second start at Watkins Glen International and the team’s third start at a road course. Fellows drove the No. 36 at the 2.45-mile road course last year and started 21st. He drove up to 15th before an on-track incident broke the suspension and relegated the team to a 40th-place finish.

FELLOWS AT WATKINS GLEN INTERNATIONAL – The Canadian racer will make his 57th NASCAR start and his 23rd NSCS start this weekend. He made 27 NASCAR starts at The Glen and scored his best NSCS finish of second in 1999 and 2004. In the past six races held at The Glen, he made 307 green flag passes placing him fourth among NSCS competitors.

CHASSIS NO. 65 – Fellows will get behind the wheel of the No. 65 TBR chassis. Dave Blaney drove the chassis this season at Infineon Raceway. He started 36th and drove up to 11th before on-track contact relegated the team to a 31st-place finish.

KEEPING UP WITH TBR – Keep up with TBR by following twitter.com/TBR_Racing and facebook.com/TBR.HBR.

Ron Fellows Quotes:
ON THE RACING AT POCONO RACEWAY – “I am excited to pick up where we left off last year. It is always great to be a part of the Sprint Cup race at Watkins Glen. Watkins Glen is a lot like the track I grew up racing on, Mosport International Raceway, so I enjoy racing there. We had a decent qualifying run last year at the Glen, but then didn’t finish the race after we were running inside the top-15. Although it is a year later, we are just looking to build on that.”

Tommy Baldwin Quotes:
ON POCONO RACEWAY – “We had pretty good success last year until we were wrecked halfway through the race. We want to finish what we started last year. It’s always good to have a road course ringer, and Ron is the best of them. Dave has done a great job for us this season, so we are excited to field the 35 car for him as well."

Andy Lally hoping for a good weekend at Watkins Glen

Corvette Racing at Sebring: Seeking to add to Sebring legacy