NASCAR's Phelps: "The noose was real" but its origins unknown 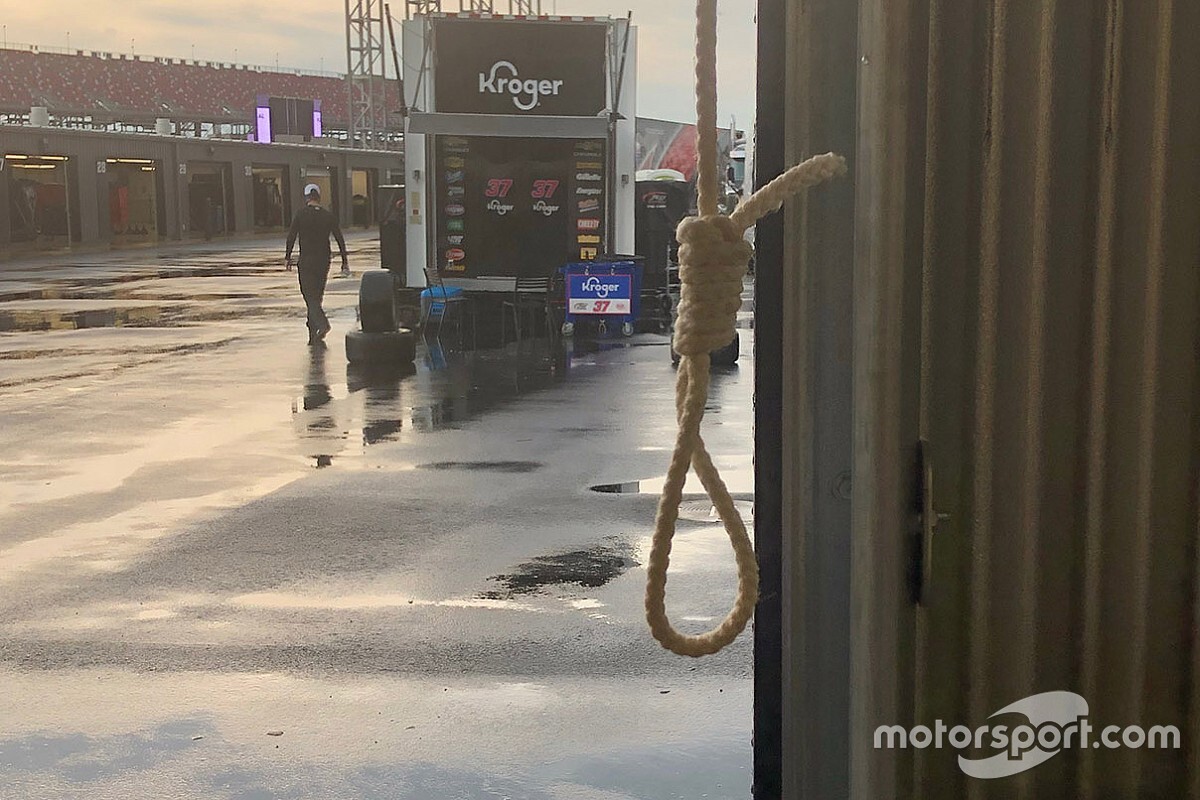 NASCAR released a photo of the noose found in the garage stall of driver Bubba Wallace at Talladega and announced plans to add additional cameras and conduct sensitivity training to help prevent future incidents.

“The noose was real,” said NASCAR President Steve Phelps, “as was our concern for Bubba.”

Phelps went through the timeline of events from the discovery of the noose and the ensuing FBI investigation which came to the conclusion that Wallace – the Cup Series’ only fulltime African-American driver – was not the victim of a hate crime.

“As I mentioned on Tuesday, given the facts presented to us, we would have pursued this with the same sense of urgency and purpose,” Phelps said. “Upon learning of and seeing the noose, our initial reaction was to protect our driver.

“We’re living in a highly charged and emotional time. What we saw was a symbol of hate and was only present in one area of the garage, that of the No. 43 car of Bubba Wallace. In hindsight, we should have, I should have used the word ‘alleged’ in our statement.”

NASCAR’s own continuing investigation found the noose created at the end of the garage stall pull rope was not in place when the October 2019 race weekend began but was fashioned sometime over the course of that weekend.

That weekend, the stall was occupied by the No. 21 team of Wood Brothers Racing. Phelps said NASCAR has been unable to determine who created the noose or the person’s intent in doing so.

“We’d like to have complete resolution here and have all the answers. Based on all the video and photographic evidence and all the interviews we have done we were not able to determine who crafted the noose,” Phelps said.

“I know that’s unfulfilling. I wish there was more we could do, but we can’t and so we have drawn this matter to a close.”

Phelps said NASCAR has had personnel at all 29 tracks on which it competes checked. In the 1,684 garage stalls, only 11 had a garage door pull-down rope tied in a knot. Only one – the one discovered Sunday at Talladega – was fashioned in a noose.

“Our ultimate conclusion for this investigation is to ensure that this never happens again, that no one walks by a noose without recognizing the potential damage it can do,” he said.

Along those lines NASCAR will conduct thorough sweeps of the garage areas and will install additional cameras in all garages.

Phelps said NASCAR will also make any changes necessary to its sanctions and code of conduct and will mandate all members of the industry complete sensitivity and unconscious bias training with specifics and timing forthcoming.

“Going forward, our efforts are best spent on making sure every competitor feels safe and every guest feels welcome,” he said.

- On Sunday, after initial inspection and prior to the race, a member of the No. 43 team noticed the noose in the garage stall. At roughly 4:30 p.m. CT, NASCAR was alerted to the presence of the noose. NASCAR completes full sweep of the garage by its security team and discovers only the rope of the No. 43 team has a noose. All the others were regular ropes.

- At about 6 p.m. CT Sunday, NASCAR senior leadership met and immediately determined an investigation was warranted and began initial steps of the investigation. At approximately 7:30 p.m. CT, Phelps notified Wallace of what was found in the garage. NASCAR put out a statement at roughly 10:40 p.m. CT Sunday.

- By roughly 10 a.m. ET Monday, the FBI arrived at the track with 15 field agents to begin its investigation. NASCAR provided the FBI with a list of personnel with access to the garage, as well as video and images taken from the weekend and the 2019 fall weekend.

- Throughout the day the FBI interviewed race team personnel from multiple teams, NASCAR officials, track fire and safety personnel and track custodial staff. Talladega Superspeedway also provided the FBI with a list of events that had taken place since October of 2019, which is when the new garages opened.

- The FBI reports back at the end of the day Monday that their interviews are complete for the day and the evidence at that point was inconclusive and they planned to continue their investigation the following morning.

- On Tuesday morning NASCAR received additional video from the team and provided it to the FBI. The video corroborated the testimony from one of the interviews that the FBI had conducted that the noose was present in that stall during the fall 2019 Cup event. The U.S. Attorney's Office and the FBI informed NASCAR that their investigation had conclusively found this was incident not a hate crime.

- NASCAR was asked to keep the conclusion confidential until the release. The FBI release went out at roughly 4:10 p.m. ET Tuesday. About 4:15 p.m. ET, NASCAR released its own statement and a teleconference was conducted Tuesday evening.

What time and channel is Saturday's Pocono NASCAR race?

Styrian GP qualifying as it happened