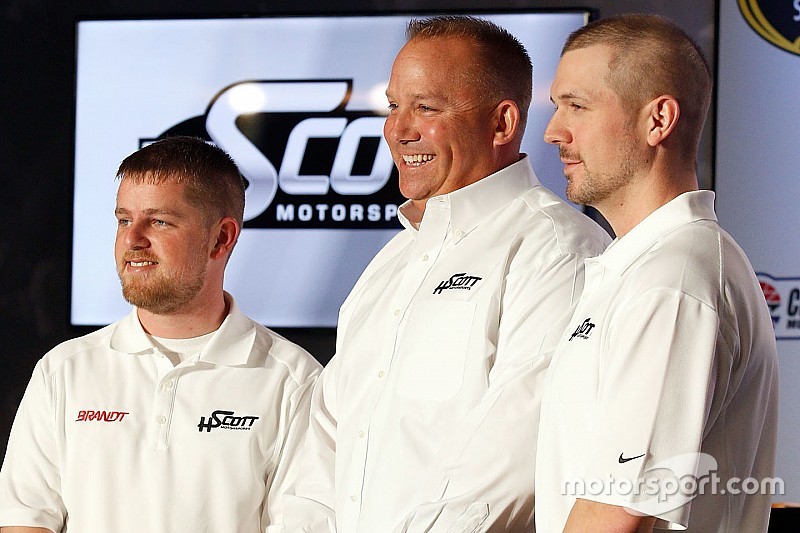 Scott — a lifelong race fan — entered the sport as an Xfinity Series sponsor with Accu-Doc Solutions in 2009 with Braun Racing. The Raleigh, N.C. native quickly moved into the ownership side, first with Todd Braun and driver Brian Scott. He partnered with Steve Turner in 2013 and Turner Scott Motorsports was born.

Scott eventually went on his own with HScott Motorsports and recruited Justin Allgaier in 2013 for a limited run on Monster Energy Cup Series. He also provided rides for aspiring drivers Ben Rhodes and Justin Haley in ARCA and Kyle Larson, Justin Marks and Brennan Poole in the Xfinity Series.

HSM purchased James Finch’s Phoenix Racing in 2013 and expanded to a full-time Cup schedule in 2014 with Allgaier.

“I’ve always been interested in racing, always been a race fan, always been attracted to it,” Scott told NASCAR.com in 2015. “Growing up in Raleigh I wasn’t in the racing scene, I didn’t grow up in it. My father was a physician. The first real inside exposure that I had was with Todd and that group. I was introduced to them in Daytona in February of 2009. We built a friendship and then we built a partnership in 2010.

The No. 51 team finished 29th in the standings, then expanded to two teams in 2015 with the addition of Michael Annett. Allgaier gave Scott his first top-10 finish in the Cup series at the 2015 Bristol Motor Speedway spring race. Allgaier was replaced by Clint Bowyer the following year. Bowyer earned three top 10s and finished 27th in the 2016 standings. Scott shuttered the team at the end of the year.

Steve Turner, his business partner with Turner Scott Motorsports, passed away in May of last year.

“We are shocked and saddened to confirm that Harry Scott, Jr., age 51, passed away yesterday, August 2, 2017. Harry will be remembered as a loving family man and successful business owner. We ask that everyone please keep Harry’s smile, generosity and essential kindness in your thoughts and prayers. Details about funeral services will be announced when they are finalized.”

"Harry Scott Jr. possessed an endless passion for racing. Owning cars in the national series and the NASCAR K&N Pro Series, his crowning achievements were his NASCAR K&N Pro Series East championships. The sport was proud to have Harry as our champion owner during that storybook era. NASCAR extends its deepest condolences to his family and friends."