NASCAR notebook from The Glen: Allmendinger learning to be patient 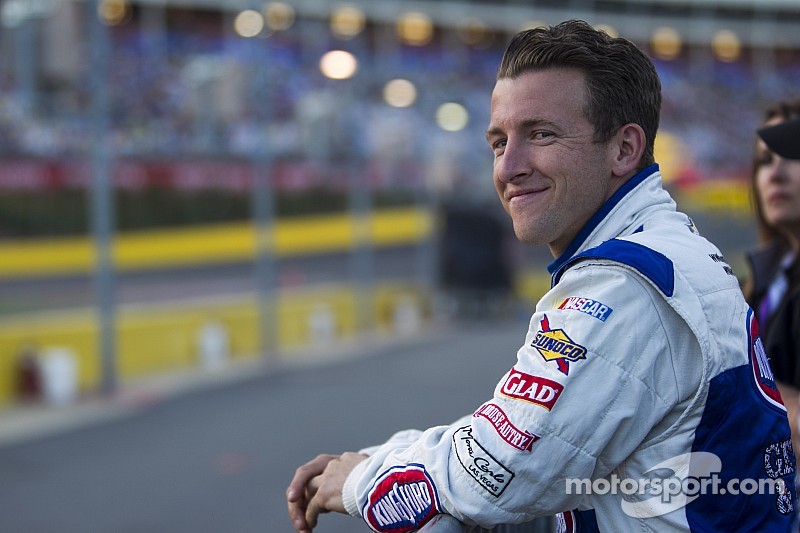 AJ Allmendinger is an excellent road-course racer with a chance to win Sunday’s Cheez-It 355 at the Glen (1 p.m. ET on ESPN).

Allmendinger (in photo above) knows that, even if he wins the NASCAR Sprint Cup Series race at Watkins Glen International and qualifies for the Chase, his No. 47 JTG/Daugherty team isn’t ready to contend for a championship.

“When it comes to the Chase side of it, it would be great to be in the Chase, because it meant we won,” said Allmendinger, who led Friday’s final practice at the 2.45-mile road course. “That’s the only way we’re going to get in.  With our race team right now, I’m not sure that we are quite in that realm of saying, if we make the Chase, we can go win the championship.

“Anything can happen, but I think to come here and, if we were to win, to get into the Chase would just be great for all of our sponsors and this race team and to help keep building the race team and promoting it. That’s the way I look at it. I don’t look to make the Chase to make the championship, but… I feel like if we do the right things we can be in contention to win the race.”

By his own admission, Allmendinger isn’t the most patient person when it comes to the performance of his team, but he’s learning restraint from team owner Tad Geschickter.

“I like the direction we’re going,” said Allmendinger, who earned the sixth-place starting position in Saturday’s time trials. “But as Tad keeps reminding, me it’s a process. This isn’t a one year deal. It’s a long term deal.

“As you know me, I’m not a big fan of being patient. I’m working on that. He keeps trying to teach me that every week, whether it’s on the golf course or on the race track.”

Busch wants tostay ahead of the wrecks

In Kyle Busch’s estimation, there’s a major difference between the high-speed road course at Watkins Glen and the slower, more technical course at Sonoma Raceway.

“I think one of the biggest things that lends to my success here (at WGI) is less opportunities for mistakes by others,” said Busch, the defending winner of the Cheez-It 355 NASCAR Sprint Cup Series event. Every single time I’ve been at Sonoma, I’ve wrecked, so that’s why the results are so bad there.”

Though Busch has one victory at each track, his average finish at Sonoma is 20.9 versus 8.1 at Watkins Glen.

“I think it’s been eight, nine races in a row or something at Sonoma where I’ve been spun out, and here I tend to be fast enough to be out front, to not have people around and don’t get spun out.

“Now that I say that, I’m sure that will change. Knock on wood, and go into Sunday, I guess.”

“It’s tough,” Johnson said of the radical change in qualifying packages. “Especially when the gear ratios change like they did. I had a completely different set of gears to choose from, and shift points, and trying to get all that right.

“And knowing I was only going to run two laps today, it’s not the easiest thing. Fortunately, I’ve run enough laps, especially at this point in my career here that I feel like I can get it close—and I did on that first run.”

Johnson qualified third for Sunday’s Cheez-It 355 at the Glen, behind only teammate Jeff Gordon and Marcos Ambrose.