Kyle Larson comes from the rear to battle for NHMS win 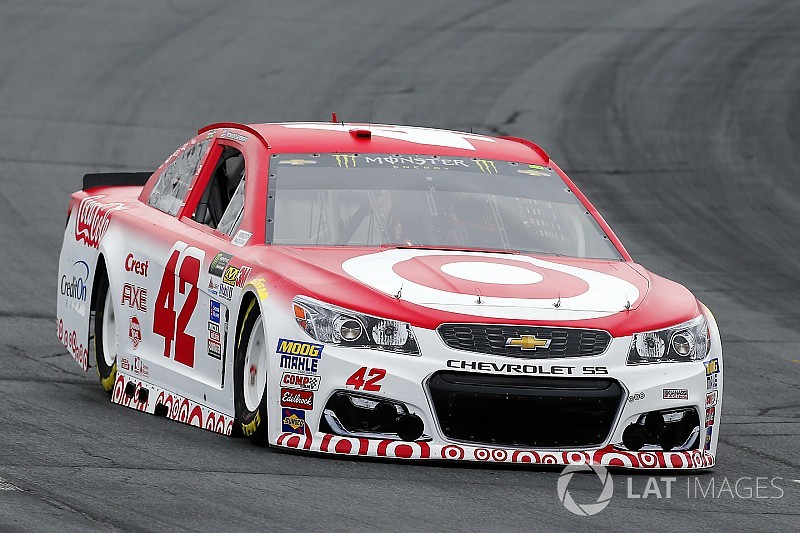 Suspend his crew chief for three weeks? No problem. Disallow his qualifying time? No problem. Make the No. 42 Target Chevy start from the rear -- again? No problem.

Put Yung Money behind the wheel and let him work his magic — all the way to the front of the pack. Larson did just that on Sunday at New Hampshire Motor Speedway. He started 39th and passed 37 cars to finish second in the Overton’s 301.

“Finished second, but another hard‑fought race,” Larson said. “You know, this is the third time we've had to start last and drove up to second. I wish we could have been a spot better again, but really proud of my team and proud of the cars that they're bringing for me to drive each and every week.”

For Larson, who accomplished the same feat the week before at Kentucky Speedway, when the team failed to pass inspection in time to qualify and the No. 42 Target Chevy came from last to finish second, there doesn’t seem to be an obstacle this team can’t overcome.

“I think with how fast we've been running and all that, NASCAR has kept a closer eye on our team in particular,” Larson said. “What was going on with the shark fin wasn't anything different really than the other teams tinker with, just trying to maximize their aero performance in their cars. We just got in trouble for it, so had to go to the back.

“Obviously, I don't think it really affected us, which is a good thing, because the little stuff that we got in trouble for so far hasn't seemed to affect the performance. Just got to keep working hard on the areas of our race car that are legal and find some more speed that way.”

Friday’s latest challenge came after Larson won the pole for the race. In post-qualifying inspection, NASCAR officials took issue with the shark fin on the rear deck lid. Larson was forced to start the race 39th.

In 16 laps on Sunday, Larson had 24 spots. By Lap 30, he was in the top 10 despite being really loose into the corner and tight in the middle. When the first stage ended, Larson was third. He finished ninth in the second segment. His last green flag stop came on Lap 238. With 50 laps remaining, Larson was third with a five-second deficit behind Martin Truex Jr.

Matt Kenseth passed Truex for the lead 10 laps later, but Ryan Newman’s spin triggered the caution. Larson joined the leaders onto pit road then exited fifth for the restart with 35 laps to decide the contest. Race winner Denny Hamlin passed Kenseth for the lead two laps later and moved out to a two-second lead. Larson used his bumper to nudge Kenseth out of his way and took over second-place. While Larson cut Hamlin’s lead by a half-second with 10 circuits remaining in the race, his car tightened on the final run.

“I was catching him a couple tenths of a lap there,” Larson said of Hamlin. “Then it seemed like when I got kind of close there, I don't know, within four or five car lengths at the end, my lap times kind of evened off a little bit with him, I started getting too tight on exit, and I couldn't carry the speed on exit like I needed to. I'd gain a lot on him on entry, but I couldn't keep the power down and keep the front turning on exit there that last run.”

Larson was penalized 35 points for failing post-race inspection after Kentucky. With Truex winning a stage at New Hampshire and finished third, his advantage grew to 38 points over second-place Larson.

Despite the challenges that continue come his way, Larson isn’t backing down.

“It seems like we have a target on our back,” Larson said. “But that's a good thing, too. It means everybody is paying attention to us. This is my fourth year, and I've never been in the position to where NASCAR and other teams are paying so much attention to our race car. That's a compliment to everybody at our race shop.

“It's been a tough couple weeks through the tech line, so if we make it through here and then have a good Tuesday at NASCAR, but we'll see.”