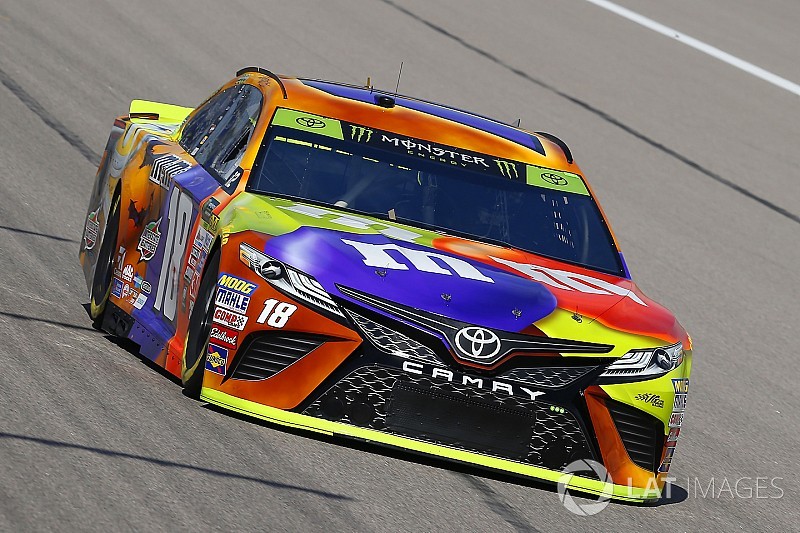 Kyle Busch got lucky in the Hollywood Casino 400 on Sunday.

Busch had the lead at Kansas Speedway when Kyle Larson’s engine blew with four laps remaining in the segment to earn his 14th stage win of the season.

"Easy now, don't count your chickens before they hatch," Busch said. "We've got a long way to go here."

Truex led the field to green and had extended his lead by more than a half-second over Harvick on the first lap. Blaney moved up to 37th for the start and gained two spots on the first lap. After five laps, Truex’s lead was .927-seconds over Harvick. Kyle Busch, Matt Kenseth, Denny Hamlin, Daniel Suarez, Clint Bowyer, Jamie McMurray, Jimmie Johnson and Erik Jones rounded out the top 10. Blaney advanced to 26th then passed Stenhouse for 25th.

After the first 10 laps, Truex extended his lead to a second-and-a-half over Harvick. Blaney passed Dale Earnhardt Jr. for 22nd, then Paul Menard for 21st on Lap 12.

On Lap 17, Kurt Busch came down pit road after hitting the wall. The crew changed tires dropped to 39th, one lap down. By Lap 20, Blaney had advanced to 17th and gained another position over the next lap.

Truex retained the lead out of the pits and selected the inside line when the race returned to green on Lap 36. Kyle Busch, Harvick, Kenseth, Hamlin, Larson, Bowyer, McMurray, Jones, Johnson, Suarez, Keselowski, Elliott, Earnhardt and Blaney rounded out the top 15. Stenhouse restarted 26th.

Truex received a restart violation penalty from NASCAR for dipping below the white line on the restart.

The leaders pitted on Lap 48, but Keselowski, Blaney, Newman, Earnhardt, Buescher and Truex remained on the track. Kyle Busch was the first car off of pit road and lined up seventh followed by Harvick, Kahne, Kenseth, Hamlin, Larson, Jones, Bowyer, McMurray, Johnson and Elliott. Stenhouse dropped to 28th.

Keselowski took the outside lane on the Lap 51 restart. Earnhardt went high and dropped to 11th. Blaney took the lead followed by Keselowski and Kyle Busch. Busch passed Keselowski for second on the next lap. Harvick ran fourth followed by Newman, Hamlin, Kahne, Truex, Larson and Earnhardt. Busch regained the lead coming to the line on Lap 55.

With 20 laps to decide the stage, Busch extended his lead to .570-seconds over Harvick. Larson, Blaney, Hamlin, Keselowski, Johnson, Elliott, Kahne and Newman rounded out the top 10.

Larson's race goes up in smoke

Larson slowed on Lap 64 and he came to pit road on the next lap. Busch continued to lead followed by Harvick. Hamlin passed Blaney for third followed by Johnson, McMurray, Elliott, Keselowski, Truex and Kahne.

The No. 42 team restarted the car and Larson returned to the track on Lap 68 on 37th, three laps down. Busch held a .605-second advantage over Harvick with 10 laps to decide the stage. Hamlin, Blaney, Johnson, McMurray, Elliott, Truex, Keselowski and Kenseth rounded out the top 10. Kenseth passed Keselowski for ninth on the next lap. Jones advanced into the top 10 on Lap 73.

Busch held a .731-second lead over Harvick with five laps to go in the stage final. With four laps remaining, Larson’s engine blew coming out of Turn 4 to trigger the third caution.

“I don’t know what to say,” Chad Johnston said.